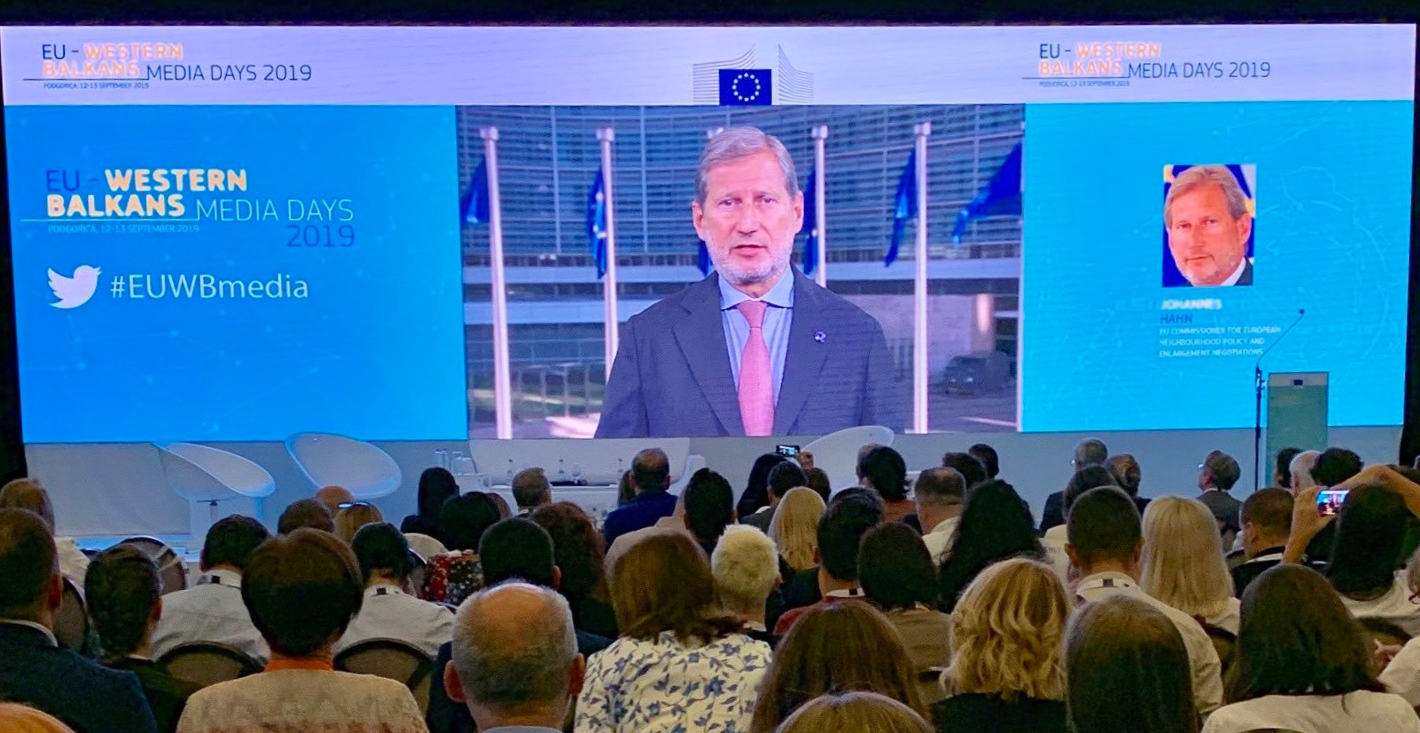 Three years after its first edition, the impression that emerges from the Media Days – an event promoted by the EU Commission in the Balkans – is that of a telenovela with a predictable ending, where the characters move within a well-defined perimeter. But the region's media need more

One of the most important events of the recent years in the Western Balkans, the EU Western Balkans Media Days, ended on a rather dull note. The event, promoted by the European Commission and now in its third edition, brought together in Podgorica over 350 experts including policymakers, journalists, civil society representatives, and advocacy organisations committed to defending and promoting freedom of expression.

At least on paper, the novelty of this edition was the (attempted) involvement of political representatives through the "Policy meets Media" panel, demanded by the media community to finally have the possibility of "an open and honest
exchange about the state of play of freedom of media in the Western Balkans, the governments’ responsibility and about concrete actions for improvement of the current situation", as highlighted in the conference brochure by Johannes Hahn, European Commissioner for Neighbourhood Policy and Enlargement Negotiations.

Such involvement, according to Srđan Cvijić, political analyst at the Open Society Foundation (OSF), proved vain: "There was an attempt on the side of the EU to directly involve political actors in the debate. However, we didn’t really experience this because politicians were not involved in a direct discussion with journalists and other participants at the conference". An opinion also shared by Maja Vasić Nikolić of the Independent Journalists’ Association of Serbia (IJAS), who confirmed to us that "the overall session failed to focus on the actual topic of policy".

The start of the meeting was tarnished precisely by the absence of Johannes Hahn himself, who inaugurated the conference "virtually" with a pre-recorded video message . A rather predictable opening, in which the Commissioner reiterated themes and concepts already extensively covered, such as the critical media conditions in the fragile transition process, the centrality of press freedom in the context of the new Western Balkan Strategy undertaken in 2018, and its non-negotiability as regards the conditions for access to the European Union.

On the same wavelength also Christian Danielsonn, Director General of the EU Neighbourhood Policy and Enlargement Negotiations, and Genoveva Ruiz Calavera, Director for the Western Balkans at the European Commission, who reiterated support for "a number of programmes and initiatives ranging from economic sustainability, media and information literacy, media accountability to regional networks that foster cooperation and reconciliation".

Such statements have put quite a few noses out of joints, and are symptomatic of an increasingly apparent detachment between shiny EU policy and the grim media reality of the Balkans. This cleavage becomes even more apparent if we consider the (few) declarations of the (few) politicians of the region present at the meeting: emblematic is the joke by Mihajlo Jovović, journalist of the Montenegrin newspaper Vijesti, who in response to "the authorities' efforts in the promotion of the rule of law and freedom of the press in Montenegro" cited in the opening remarks by Minister of Culture Aleksandar Bogdanović, commented: "I wonder about which country he is talking about".

In fact, last September 9th, the international appeal to the Montenegrin authorities for the acquittal of investigative journalist Jovo Martinović stressed that the latter "is accused of marijuana smuggling and criminal association and was sentenced to 18 months of detention, despite overwhelming evidence that his only connection to organised crime is through journalism". A case that piles up with that of Olivera Lakić – an investigative journalist shot in the legs in May 2018 – in which, as Maja Vasić Nikolić points out, "doubts were raised about the investigation and the court's verdict".

However, Nikolić herself highlights that the event also gave the opportunity "to share ideas, worries and possible solutions to problems media is facing, practically, worldwide".

"I have had some great discussions in those three days and some interesting ideas popped up as well, so let's see what comes out of it in the end", added to OBCT Ilir Gashi, media analyst and former director of the Slavko Ćuruvija Foundation (SCF). "It is also a good thing that we got the opportunity to speak directly to the high representatives of the European Commission and inform them on the current developments in the sphere of media freedom in our countries. We got strong assurances that for them this issue is basically sine qua non of the EU accession process. On the other hand, we have been meeting and talking on this conference (and many other conferences as well) for five years now, and it is difficult to see what was the real impact of this on our local situation".

But it is especially during the three seminars – Independent Reporting, Reconciliation and Regional Cooperation, Encouraging New Generations of Journalists and New Business Models – that concrete ideas for improving the situation emerged: as reported by Maja Vasić Nikolić, panelist of the workshop "Reconciliation and Regional Cooperation", "the group provided the organisers with a concrete list of recommendations that can contribute to
overcoming the nationalist narrative". Among these, renewed pressure to guarantee the rule of law, support for trade associations and the regional network of the Press Councils, establishment of a national and/ or regional self-regulatory body for private advertisers, media literacy, and campaigns against the media that feed hate speech.

Freedom of the press and EU membership: a lark mirror?

Three years after its first edition, the impression that emerges from the Media Days is that of a telenovela with a predictable ending, where the characters move within a well-defined perimeter, between declarations repeated to exhaustion and bones thrown to quell tempers.

Predrag Blagojević, chief editor of Južne Vesti, Serbian newspaper victim of administrative obstinacy, is therefore not wrong when he tweets that "#EUWBmedia is nothing but a vent used by EU administration for Balkan journalists and media", voicing the widespread feeling that the axiom "No press freedom – No EU" has now become a lark mirror. In fact, faced with the progressive deterioration of freedom of expression, the reaction of the European Union has often been weak and absent-minded, little inclined to exert the necessary pressure to actually improve the situation.

Therefore, as pointed out by Nikola Burazer in an article on BiEPAG Blog , criticisms in country reports are not enough, nor are ex-post statements on striking cases. In the face of the apparent crisis of this fundamental right – in the very countries where the accession process is at the most advanced stage, namely Serbia and Montenegro – it is necessary to go beyond simplistic awareness-raising, and use with conviction a more assertive power: in a nutshell, a "negative conditionality".

This means, first of all, to stop pretending that, in the context of access negotiations, everything has the same weight. The impression, in fact, is that press freedom is often stifled by other issues, including the stability of the area. Emblematic in this respect are the words of Ilir Gashi, according to whom “it is the overwhelming feeling in our [Serbian, ed.] media community that the EU is turning a blind eye to what is obviously turning into a galloping autocracy, as long as the wider criteria of so-called 'regional stability' are met, and as long as President Vučić appears willing to work on resolving the Kosovo issue".