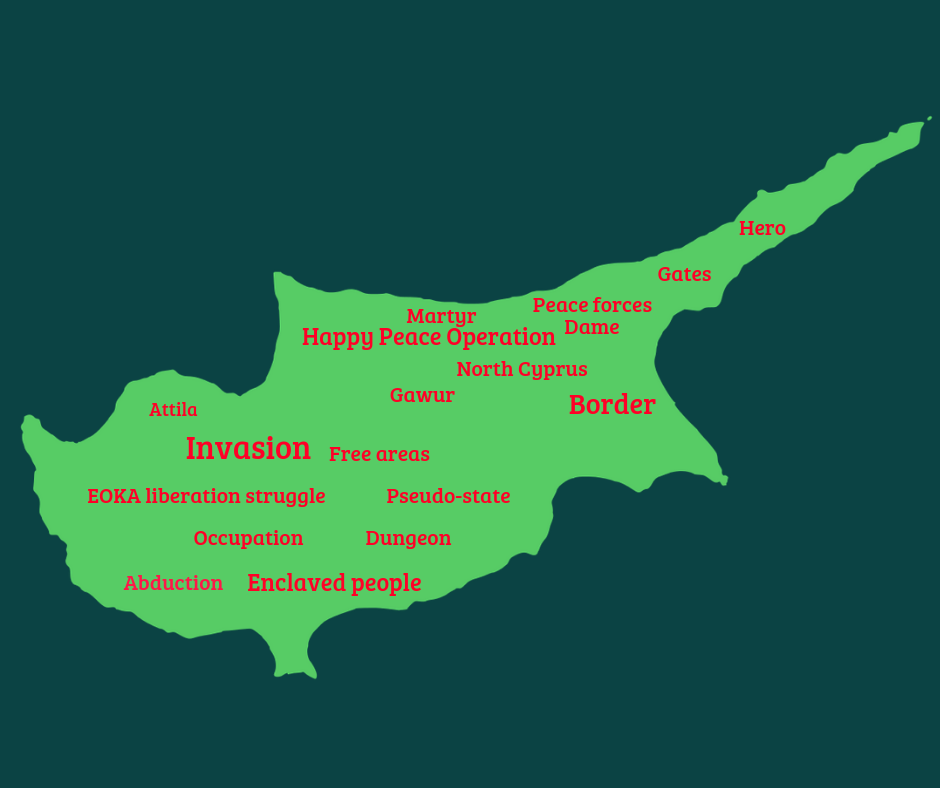 Death threats, a petition, protests. Last July, in Cyprus, a glossary for journalism published by the OSCE sparked a furious debate

Maria “betrayed” her country for the first time at eighteen, when she participated in a  festival organised by the UN at the Ledra Pallas Hotel, one of few places in Cyprus’ buffer zone where Greek and Turkish Cypriots used to be able to meet.

Soon after, she enrolled in the Faculty of Turkish Studies at the University. "It was considered the department of spies - she says - finding a job could have not been easy". At the time it was impossible to cross the Green Line which separated the northern part of the island, mainly inhabited by Turkish Cypriots, from the south. Given the limited opportunities to put into practice the notions of Turkish language learned in the classroom, Maria moved to Istanbul to complete her studies. Four years later, she came back to a different situation: the Green Line had been opened in 2003, Cyprus had joined the European Union the following year, and the presence of bilingual people had become necessary. "I have worked as a translator, interpreter and editor for a news agency, and then, a year ago, I accepted to join the OSCE project Cyprus Dialogue", she explains.

In fact, Maria Siakalli is one of the four authors of the publication “Words that matter: a glossary for journalism in Cyprus" which, last July, heated up Cyprus’ already muggy summer. The four journalists - two Greek Cypriots and two Turkish Cypriots, two women and two men, two bilinguals from each side - monitored the language used by local media for a period of six months. They identified the most controversial terminology, looked for less conflictual alternatives, and provided a list of 56 words that journalists from both sides are invited to reconsider.

More on the Resource Centre

Aidan White, president and founder of the Ethical Journalism Network , is the editorial coordinator of the “Glossary for Journalism in Cyprus”.

In his introduction to the publication, he stresses that:

- it is not a list of banned words or phrases;

- it is not intended to restrict or otherwise constrain the capacity or the right of journalists and media to report freely;

- it is not a statement of political-correctness enforcing media compliance in the service of a hidden political agenda.

Rather the Glossary is "an invitation to media owners, editors and working journalists to discuss how they frame their stories and narratives and the language they use in so doing."

"I know that the publication is optional, but it is critical for a bunch of reasons. First, the authors arbitrarily decide which terms affect the two communities while empirical research was needed. Second, collective memory cannot be erased. In 1974 Turkey did invade Cyprus and there is no alternative to a historical fact", roars Dr. Natalie Alkiviadou from the University of Central Lancashire in Cyprus, specialised in Human Rights and, in particular, hate speech.

Two weeks before its official presentation, 210 journalists signed a petition condemning the intent of the glossary. The statement by Philelefteros, the major daily newspaper in Cyprus, read: "We have to tell them that we will continue to call the 'Cyprus Peace Operation' an invasion".

On July 15th, 1974 the Greek Cypriot paramilitary organisation EOKA B seized power with a coup that aimed at the union of Cyprus with Greece (enosis); the subsequent intervention by the Turkish troops - which determined the current division of the island - is remembered by one side as a 'happy' operation of 'liberation' and by the other as a 'barbaric invasion' or 'occupation'.

"Words show how differently the two communities experienced the same events. The issue is to find a common ground for confrontation, otherwise there can be no possibility for any dialogue", explains Dr. Yiannis Papadakis, anthropologist at the University of Cyprus who spent many years researching the language used by Cyprus’ two main communities in school history books. "This glossary was an attempt to create a common ground, but unfortunately anything that tries to challenge the monolithic narratives of each side is rejected. Some would argue that not all words are up for negotiation, especially those referring to legal issues. But those were exactly the words they did not agree on anyway".

There are 14 terms for which the authors of the glossary have not found a neutral and common alternative: invasion, occupation, pseudo-state, illegal elections, Greek Cypriot administration. "This work has allowed us to discover how certain words, belonging to nationalist rhetoric, are sedimented in our mind", says Maria.

What is hate speech? How to contrast or prevent it? On the Resource Centre on Media Freedom a dedicated special dossier provides a European overview of the issue.

Maria defended the glossary, being in return attacked by at least 27 different accounts that threatened her with death or rape, both on her wall and by private message on Facebook. And, once again, they called her a traitor, sold to Turkey's interests. Her, a Greek Cypriot, daughter of two parents who fled from the northern part of Cyprus. In the profile pictures of the users who attacked her stand out Greek flags and posts shared from extreme right-wing websites.

"I believe that there is a nationalist club that activates itself in cases like this. I warned the OSCE of the incident, but I did not go to the police because I was afraid that they would not protect me and the situation could get even worse", she confides.

According to Dr. Alkiviadou, in the case of Maria Siakalli, one cannot speak of hate speech as journalists do not represent a minority or a protected group. In fact, Article 35 of the Cyprus Criminal Code, reformed in 2017, recognises only hate crimes perpetrated for ethnic or religious reasons or for gender discrimination. A study by the University of Cyprus in 2017, however, identifies nationalism and otherism as the basic constituent elements of hate speech in Cyprus and denounces the unwillingness of the police, the responsible body for monitoring the phenomenon, to implement the legislation.

Even the official government of Cyprus lashed out against the publication, stating that if it had been made aware of the project, it would have opposed it. The reactions of the Turkish Cypriot authorities and population, on the other hand, have been more lukewarm. "We, Turkish Cypriots have already broken these taboos in the early 2000s and we are now better in tolerating non institutional language”, emphasises Esra Aygın, who co-authored the Glossary.

Between 2004 and 2009, the Turkish Cypriot government of Mehmed Ali Talat approved a series of measures that reformed the language used in the history books of middle schools and in the media, but this has not facilitated negotiations."In 2004 Turkish Cypriots were willing to compromise because they had a chance to enter the EU and a lot to gain since they were not recognised and were less wealthy than Greek Cypriots, like today", says Dr. Papadakis.

The last negotiations, in 2017, have again failed and none of the interviewees sees a political solution to a stalemate in Cyprus, but everyone has hopes at the social level. "Even if one journalist stops using offensive words, it will be a big change - concludes Esra Aygin - the only way to change society is to take risks".

What is hate speech? How to contrast or prevent it? On the Resource Centre on Media Freedom a dedicated special dossier provides a European overview of the issue.