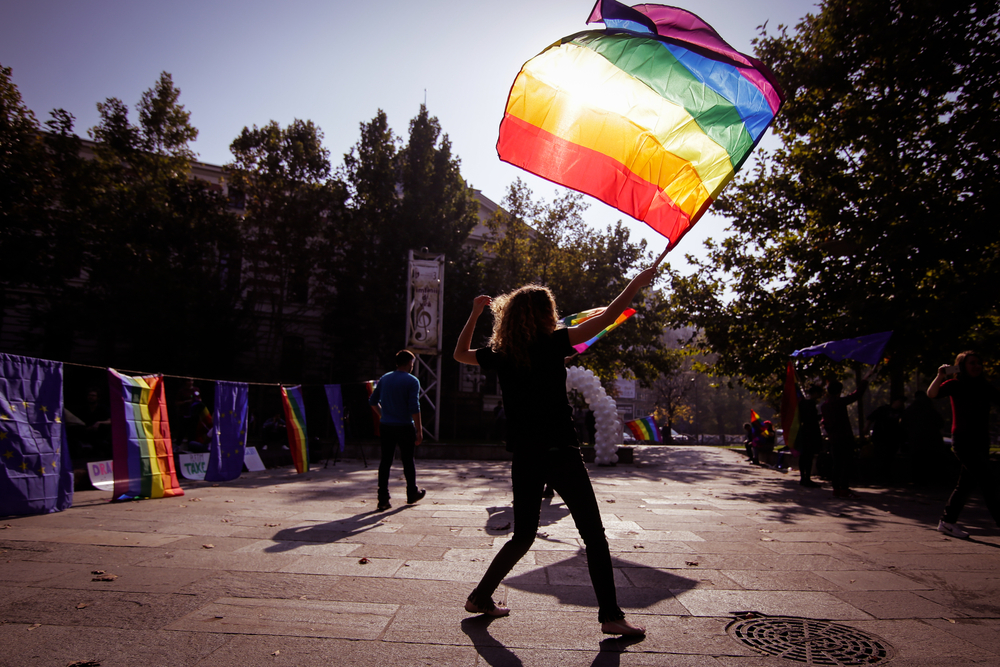 Tomorrow Skopje is holding its first Pride, with the support of important institutional representatives. A step forward for the rights of the Northern Macedonia's LGTBI community, in a historically difficult context

On Saturday, June 29th, under sizable police protection, around 500 LGBTI activists and allies are expected to be part of Skopje's first-ever Pride Parade. The organiser, the “National Network Against Homophobia and Transphobia”, announced that the event is scheduled to start at 11 am at the Woman Warrior park in the capital's city centre.

“The pride parade will be a form of protest for affirmation, support, and protection of human rights of the LGBTI people in North Macedonia”, said during the press conference in Skopje Antonio Mihajlov, an LGBTI activist.

Besides LGBTI activists from the neighbouring countries, Macedonian high-profile politicians are expected to attend the Pride too. Minister of Labour and Social Policy Mila Carovska is expected to address activists at the end of the parade. Also, president-elect Stevo Pendarovski and Skopje mayor Petre Shilegov announced their presence, thus giving the event much-needed political support.

Registration of participants and the start of the march will be at the Woman Warrior park in the city centre. The parade should start at noon and end around 1 pm at the main City Park, but the event will continue for several more hours. The walk will be followed by several concerts in the City Park, including by this year's Eurovision representative Tamara Todevska, who will perform her song “Proud”. The Pride is scheduled to end after 4 pm.

North Macedonia, together with Bosnia and Herzegovina, was the only Balkan country to never host a Pride Parade – at least until tomorrow. There are announcements that Sarajevo will follow Skopje’s example and hold its first Pride Parade by the end of 2019. However, despite the positive sign, the overall situation in the region is not so bright. (North) Macedonia decriminalised homosexuality in 1996, but since then no major advancement in the rights of the LGBTI people have been made.

The organisation of the Pride is a step in the right direction, but even today LGBTI people are the most marginalised community in the state. They are the target of physical assaults, hate speech, and discrimination on a daily basis.

“Violence and inefficient protection from violence, discrimination, impunity for hate speech, high risk for homelessness, limited access to work positions etc. are amongst the major issues that LGBTI people face on daily basis”, a representative from the LGBTI Support Centre in Skopje told OBCT.

The grime situation has been reported by several international organisations. Namely, the National Democratic Institute (NDI) over the summer of 2015 conducted research on the major LGBTI issues in the Balkans. The poll showed that “most respondents in Albania, Bosnia and Herzegovina, Kosovo, (North) Macedonia, Montenegro, and Serbia have low levels of knowledge about the groups comprising the lesbian, gay, bisexual, transgender and intersex communities, and a correspondingly high degree of resistance to conferring equal rights and opportunities based on sexual orientation and gender identity”. On the positive side young, educated, and urban residents show measurable support for LGBTI rights.

The UN’s Universal Periodic Review – a unique process which involves a review of the human rights records of all UN Member States under the auspices of the Human Rights Council – during the evaluation of the human rights situation in North Macedonia held on January 24th, 2019, mainly focused on Roma and LGBTI rights as the most vulnerable groups in the country.

According to the International Lesbian, Gay, Bisexual, Trans and Intersex Association (ILGA) Annual Review, last year North Macedonia occupied the 41st place out of 49 European countries - 34th this year, between Cyprus (33) and Italy (35).

Yet, according to LGBTI activists, the situation on the ground is more or less the same. As evidence of this conclusion, they point out the constant attacks against the LGBTI Support Centre in Skopje and the impunity for those incidents. Also, hate speech and discrimination are endemic in a significant portion of Macedonian society. Regardless of their political, ethnic, or religious background, many citizens are united in discriminating against the LGBTI community.

In a statement for the media, president of the Helsinki Committee for Human Rights of the Republic of Macedonia Uranija Pirovska said that one of the steps in the right direction would be identifying and prosecuting all those who attacked the LGBTI Centre in previous years.

“This will be an ultimate sign of the existence of political will to tackle those issues and change the climate for the LGBTI community”, Pirovska said.

Attacks against the LGBTI support Centre

The incidents and attacks started right after the Centre was opened in October 2012 in the Old Bazaar in Skopje. Just a few hours after the opening event ended, around 3.30 am, the Centre was targeted with stones by several perpetrators. Just two months later, on the night between December 15 and 16, unknown perpetrators drew a swastika and wrote Tremiti on the protective metal bars of the Centre, referring to the Isole Tremiti where Benito Mussolini imprisoned hundreds of homosexuals. The night after, the Centre was again attacked in an attempt to set it on fire.

“The attacks on the Centre were a materialisation of previous homophobic and transphobic statements, threats, and pressures brought forward with a purpose to stop the opening of such an institution”, representatives from the Centre told OBCT.

Next year, in October 2014, about 20 hooded hooligans vandalised the Damar cafe in the Old Bazaar, where the LGBTI community was celebrating the Centre's second anniversary. As the media reported, a woman was injured after the hooligans threw a bottle at her head. So far none of these attempts at damaging or burning the Centre was cleared, while perpetrators remain unidentified.

On the right path

This year's organisation of the Pride, together with the support by highest state officials, is definitely a big step forward considering the lack of positive actions shown by the former conservative ruling elite, led by Nikola Gruevski's VMRO-DPMNE. Following this year’s adoption of the new Law on Prevention of and Protection against Discrimination, which for the first-time prohibited discrimination based on sexual orientation and gender identity, the country is moving toward a more inclusive and tolerant society.

The new minister of Education pledged to revise some textbooks and delete or rewrite discriminatory statements like “Homosexuality is a stagnation of the psycho-social development at a lower level”, and “homosexual relations are parasitical as opposed to heterosexual ones”.

ILGA-Europe pointed out that North Macedonia should adopt laws against hate speech with explicit mention of all grounds (sexual orientation, gender identity, sex characteristics) as the social media are overwhelmed with hate speech following the announcement for the upcoming Parade.

However, judging by previous experience and present reactions of the citizens, many more steps need to be undertaken to achieve more inclusion. Pride is one step in that direction, but it will not produce the expected changes as long as there is impunity for hate speech and hate-motivated assaults. The ultimate sign of success would be to have Skopje Pride Parade without police protection.