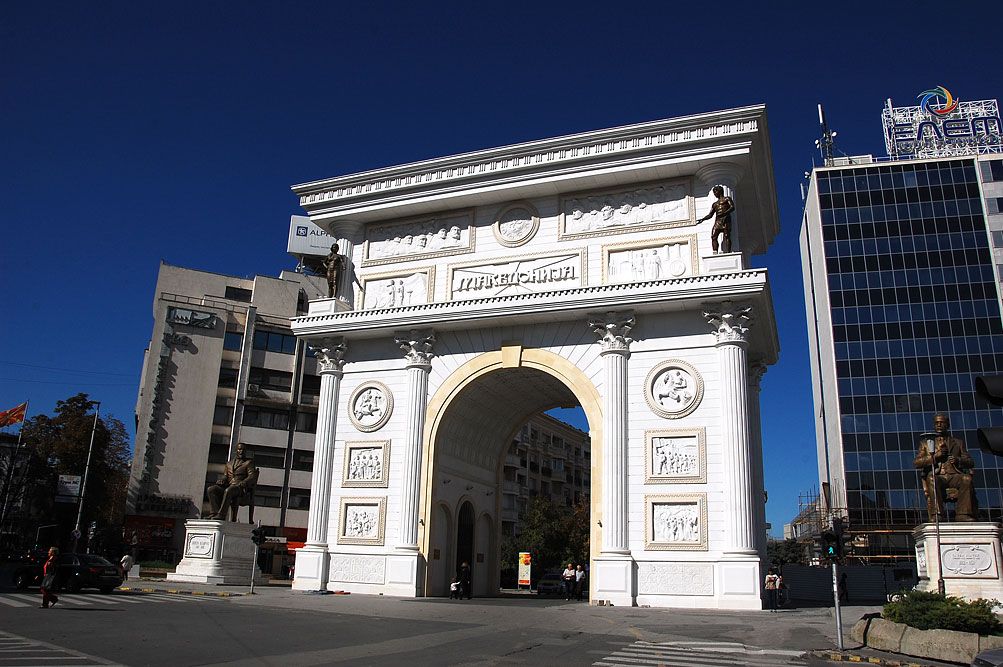 In the aftermath of the Skopje rallies, internal talks supported by EU and US diplomacy are trying to draft an exit strategy to the crisis

Nor the meetings between the four leaders of the biggest political parties, neither the recent rallies in the country's capital, Skopje, have offered any solution for the political turmoil that in these days is preoccupying Macedonia.

In the meantime, behind closed doors, the four leaders of the biggest political parties – the ruling Nikola Gruevski (VMRO-DPMNE) and Ali Ahmeti (DUI), and the opposition Zoran Zaev (SDSM) and Menduh Thaci (DPA) – mediated by the US and EU Ambassadors in Macedonia, met twice. They are due to meet again, for a third time, on May 26.

Also, Gruevski and Zaev met in France on Tuesday, May 19, at talks under the mediation of European parliamentarians in Strasbourg. They also met the Commissioner for European Neighbourhood Policy and Enlargement Negotiations, Johannes Hahn.

After all these events, it was expected that the picture would be clearer. So far, it is not. Both, Gruevski and Zaev, are not showing any will for compromise. Zaev is emphasizing that there will be no overcoming of the impasse until the conservative government resigns, and a technical one organizes a “fair election”.On the other side,Prime Minister Nikola Gruevski made it clear at the pro-government rally on Monday evening that he would not step down.

The main question on Tuesday was - which rally had had more participants? For two days, pro-government and pro-opposition media were “counting” people, exaggerating or understating numbers, as they pleased. The logic behind this “mathematical” operation was: “People are behind me, so you should obey”.

Had there been a clear advantage - according to independent sources both rallies had around 50.000 people each - the pressure would have been strong on one of the sides. But in this situation, for there was almost an identical number of supporters, this bargain chip fell in the water.

The only difference between this gatherings was in its composition, rhetoric and on the “motivation” of people attending. The anti-government protest was more diverse. Beside the opposition party members there were NGO activists, people from different ethnical background, also a lot of undecided/neutral voters that aren’t members of any party. On the other side, on Monday, it was mainly the ruling party members and representatives of the smaller parties in coalition.

There was fierce rhetoric on both sides. The Social Democrat opposition leader, Zoran Zaev, accused Gruevski and his government of stealing public funds while showing off as a great patriot, and urged Gruevski to leave. “This gathering here says one thing - with or without his agreement, he will leave. Your time is up!”

On the other side, Gruevski accused the opposition for trying to establish a dictatorship of a political minority. "Those people are seeking my resignation without the people's will. Our message to them is - No retreat! No surrender! Macedonia is strong and Macedonia will win. We will win!”

In the meantime, behind closed doors, the four leaders of the biggest political parties – Gruevski, Ahmeti, Zaev and Thaci – mediated by the US and EU Ambassadors in Macedonia, met twice. Both times with no progress. Unofficially, on the last meeting in Skopje, Ahmeti offered a mini reshuffling of the government and three places in the new government for the opposition. After the meeting, Zaev told reporters that before they start “open talks on any of the issues, certain things need to be solved.”

His party continues to insist that a temporary government be formed without Gruevski. On the other side, Gruevski is clearly saying that he will not step down. Analysing his recent statements, it is clear that he believes that with the resignations of the Interior Minister Gordana Jankulovska, of the Minister of transport, Mile Janakieski and of the Director of the Secret Intelligence Agency, Sašo Mijalkov, Gruevski's cousin, he has already paid the political price.

Even the hours-long talks in Strasbourg between Gruevski and Zaev, mediated by the European Parliamentarians Richard Howitt, Eduard Kukan, Ivo Vajgl and the European Commissioner for Neighbouring Policy, Johannes Hahn, ended without a tangible agreement on how to solve Macedonia's political crisis. Behind closed doors, on Tuesday and Wednesday, morning talks lasted around 10 hours. Mediators in a joint press release “welcomed the efforts of the party leaders to work towards an agreement in the interest of all citizens of the country and to address challenges arising from the crisis in accordance with European standards.” They emphasized that a "frank discussions on key issues of contention" was held and that all parties “agreed to put the interest of the country first".

There are two options before the politicians. The first is to solve the political crisis as soon as possible and, as they pledged, “to put the interest of the country first”. The second scenario is the continuing of this status quo and the rising of tensions between the different party members.

Many analysts believe that the main issue on these meetings is to find an exit strategy from this situation. In other words – to avoid the judicial consequences for the main actors. For Zaev, the charge of alleged conspiration with a foreign intelligence service to topple the government. For Gruevski, to avoid the possibility to be prosecuted for alleged wrongdoings during his governance.

Political rallies did not bring any advantage in the discussions to neither of the sides. Gruevski is playing on his best card, + 200.000 votes from the last parliamentary elections (2014). On the other side, Zaev's best hand is the wide support he enjoys from different communities, not only from his electorate.

So far, time has shown that Gruevski can also count on the loyalty of Ali Ahmeti, leader of the DUI and a close government ally. Although he has been portrayed as a nationalist, his rulings show that he is just another example of a political opportunist, using the methods and language that will best work with the masses. If Gruevski was a true hard line nationalist, it would be impossible to explain some of his political moves. For example, his direct involvement in a political deal to amnesty suspects in four cases of crimes against humanity and war-crimes dating from the Macedonia 2001 conflict between Macedonian security forces and Albanian insurgents, whose leaders later formed the DUI party. In all four cases, the main suspects were Albanians. This and a lot more concession could explain Ahmeti's loyalty, because he is the key to Gruevski's governance. If Ahmeti leaves the government, there will be no ruling majority for Gruevski.

Gruevski, who has won successive elections since 2006, is also backed by the rising euro-skepticism among ethnic Macedonians. Macedonia became an EU candidate in 2005, but has yet to begin accession talks due to the opposition coming from Greece. Athens denies its neighbour the right to use the name “Macedonia”, arguing it implies a claim on the northern Greek region bearing the same name.

The VMRO-DPMNE leader is also using the patriotic emotions of Macedonians having in mind that almost every neighbour has an open issue regarding Macedonia – the name issue, language, church, territorial integrity. This is why Gruevski repeatedly uses the qualification "foreign enemy" and of "foreign intelligence services" in trying to discredit the opposition.

Recent history has proved that, without the EU and US mediation, no big decisions were taken in Macedonia. Therefore, the foreign involvement in future negotiations is indeed necessary. In this crisis, we have also witnessed some positive elements. The opposition’s ethnically mixed protest, for one, and the fact that both rallies were overall peaceful. Now it's time for politicians to grow up, and draft an agreement.