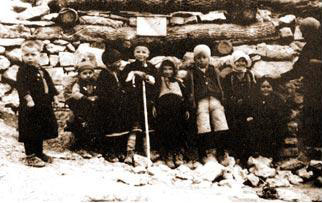 This year marks the 60th anniversary of the exodus of the "refugee children" from Aegean Macedonia (Northern Greece). They fled their homes amidst a civil war and when they became adults, could not return to their homes nor claim their land. For the first time ever, the Macedonian government endorsed their demands

This year marks the 60th anniversary of the exodus of the "refugee children" from Aegean Macedonia (Northern Greece). In July, from all over the world, the now elderly "children" gathered in Skopje to commemorate.

Their story is sad. They fled their homes amidst a raging civil war and grew up separated from parents and siblings. When they became adults, they could not return to their native Greece nor claim their land. This year, the Macedonian government endorsed their demands for the first time.

Some 25-30,000 children were exiled from northern Greece in the later phase of its 1945-1949 civil war. According to Macedonian historians, most of the children were of Macedonian ethnic origin, whereas several thousand were Greek. They were evacuated by the Greek Communist Party (CPG), which was one of the sides in the conflict, and were sent to "democratic" communist countries in the Eastern block. Many of the children stayed in Macedonia and the other republics in the former Yugoslavia. Others went to Hungary, Romania, Poland, and other communist countries.

The humanitarian motive was to save the children from war; however, by doing that their parents could be more easily mobilised as combatants.

Some historians claim that even in that humanitarian operation, there was an ulterior motive of ethnic cleansing.

After having been exiled from Greece, some of these children were brought back in the last phases of the war - as child soldiers. They were taken from their dorms in the allied communist countries, trained in camps in the former Yugoslavia, and sent to the front. Poland was the only country, which did not allow the recruitment of children it hosted.

Once they became a little older, many of the refugee children scattered to the migrant-friendly lands of America, Canada, and Australia.

When they fled, they were told they would return shortly, immediately after the victory. Alas, they never did.

In the post-war years, their Greek citizenship was revoked and their family's properties in Greece were confiscated. For half a century, they could not enter Greece. Those who attempted were turned back at the border. In the 1980s, Greece passed legislation allowing the return only of those who are "Greek by origin". Several years ago, Athens conceded to allow entry for those who would not have the Macedonian toponym of their village of birth written in their passports.

After all these years, the "refugee children" have demanded the right to go back, and the restitution of their property.

"We call upon the Greek government, in the name of historic justice and human rights as a universal value, to face the unsustainable policy of the past. We want to be able to return to our homeland and we want abolition of the discriminatory laws which deny our rights," said the refugees at their meeting in Skopje in July.

Several thousand refugees gathered from all over the world in the newly built hall "Boris Trajkovski". The President of the Macedonian Parliament, Trajko Veljanovski, greeted them.

For the first time, the Macedonian government gave any official endorsement to the refugees. At the same time, Prime Minister Nikola Gruevski wrote letters both to Greek Prime Minister Konstantin Karamanlis and European Commission President Jose Manuel Barroso, asking for acknowledgement of the unrecognised Macedonian minority in Greece.

The Macedonian press has recently debated at great length over the possibility of legal action for restitution of refugee property in Greece.

The Association of Refugee Children from Aegean Macedonia has recently filed a complaint with the European Court of Human Rights in Strasbourg. Apart from that action, no individual petitions for property restitution have been reported. Some news indicate that around 4,000 claims have allegedly been received by a coordination initiative from Skopje. Yet, experts claim that launching such an initiative through Greek courts could prove a challenge. Some suggest exploring the possibility of taking legal action in courts in other countries. Legal experts further state that the provision in Greek law that only "Greeks by origin" are entitled to restitution of property is not in accordance with international standards.

"The Nuremberg principles adopted in 1946 which are now legislation in more than 80 countries", says Sam Vaknin, a well known economist, "are not concerned with the ethnicity or the 'origin' of the refugees. If their property was seized, it is not important if they were listed as Bulgarian or even if they were or were not Greek citizens."

An Israeli citizen who lives in Skopje, Vaknin makes comparisons to the Jewish experience in obtaining compensation for the suffering during the World War II. According to him, it is important that "Macedonia becomes the home state of the refugees to give citizenship to those who do not have it, and to become their legal protector." That is to say, the government should get involved and stand behind these legal proceedings.

Since independence, all Macedonian government have hesitated to do this. Under Greek pressure in the early 1990s, Macedonia changed the provision in its constitution committing to care for its kin in neighbouring states. With all the complexity of the name issue and Greek consistent claims of Macedonian irredentism, it is clear why subsequent governments in Macedonia have chosen not to get involved. It would have been the ultimate shortcut for worsening relations with Greece.

After the signing of the interim accord in 1995, which ended the Greek embargo, the relations between the two countries have been improving for the 13 subsequent years, the name issue has been put under the carpet and Greek investment has increased. Many thought this was a perfect way to resolve the conflicts, until the beginning of this year and the NATO summit, when Greece vetoed Macedonia's entry over its name.

For years after the refugee children's exile, there had been consistent attempts to reunite the children, scattered over the world, with their families. Some succeeded. Some never did. In some cases, it took decades for a brother and sister to meet.

Cepreganov says, Tito and Tempo (Svetozar Vukmanovic) were promising "unification" to the Macedonians as a mode for achieving their idea of domination in the Balkans. In this way, they simply manipulated them for Stalin's global and Tito's regional interests.