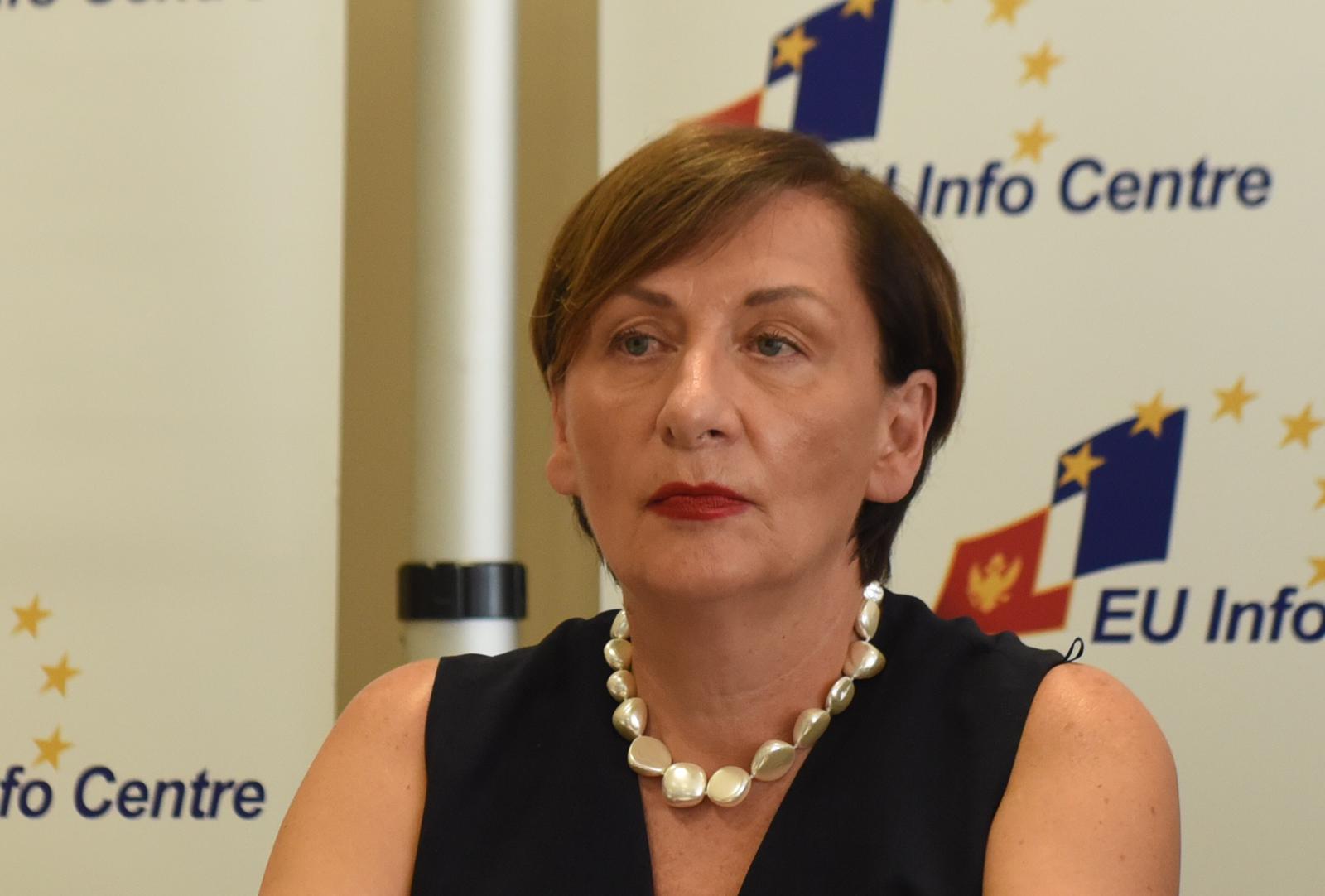 Interview with Milka Tadic Mijovic, one of Montenegro's leading journalists and president of the Center for Investigative Journalism, who has always been at the forefront of the fight for a better country and for the defence of freedom of expression

Milka Tadic Mijovic is a brave woman. For more than thirty years she has been at the forefront of the fight for a better Montenegro, for a country that is not only European and pro-Western in words and in which the rule of law and functional democracy are everyday life and not a chimera. Tadic Mijovic was one of the founders of the weekly Monitor and of the Association for the Yugoslav Democratic Initiative (UJDI) – during the bloody sunset of the former Yugoslavia – and among the anti-war activists. For ten years she fought against the regime of Slobodan Milosevic at the end of the 20th century, while for the last 15 years she has opposed the “captured state” of Milo Dukanovic.

In this interview, the president of the Center for Investigative Journalism (CIN) in Montenegro talks about the attacks on journalists, their position, and the problems Montenegro and the new government face in dismantling the dense network of relations tied to the thirty-year regime of the Democratic Party of Socialists (DPS), particularly in the judiciary.

Why are journalists in Montenegro so often the target of verbal and even physical attacks? Among other things, you too were recently verbally assaulted…

Montenegro is among the last countries in Europe in the Reporters Without Borders freedom index. One of the reasons is the large number of attacks on journalists that have remained unsolved, from  Duško Jovanović to Olivera Lakić. My case was not that serious and dangerous. The fact remains that journalists and the media receive a lot of threats and pressures. The biggest problem is not the constant attacks, but none of these serious incidents going to trial. Widespread impunity is the reason there are so many attacks on journalists. No one is afraid to attack journalists because no one has been taken to court, not to mention sentenced. Even when the perpetrators of criminal acts against journalists are accidentally found, the instigators are not. The target of the attacks are always people and the media that investigate the links between organised crime and prominent politicians. The directors of the Montenegrin daily Dan and the Croatian weekly Nacional (Dusko Jovanovic and Ivo Pukanic) were killed. Olivera Lakic also wrote about them and they shot her. Montenegro is one of the most tragic examples of political collusion and cooperation and organised crime. This connection is so strong that it is often not possible to draw a clear boundary between these two realities.

So the problem is the judiciary not doing its job?

One of the key problems is the judiciary. Our country, as Milovan Dilas once said, is "a land without justice". The judiciary in Montenegro was and still is under the control of politics and sometimes under the control of criminal structures. EU accession negotiations have become the longest in history precisely because the judiciary is a real cancer in our system. Even the principle of the rule of law cannot be established in Montenegro.

Is the appointment of a new National Council of the Investigating Judiciary a precondition for starting the creation of rule of law?

The previous regime lost power in the elections on August 30 last year, but not its strength. They have maintained the main levers of economic power and control of the institutions. The very fact that a year after the elections the new government and the majority did not have the strength to make substantial changes is sufficiently eloquent. This speaks volumes about how difficult it is to dismantle this system that has controlled everything in the country for 30 years. An independent chief prosecutor and prosecutor would be the first important step in creating the rule of law. We never had prosecutors who were not controlled by the political elites. It would be a really big step forward not only to improve the internal situation in Montenegro, but also a strong push towards EU membership. I think that those who have lost power will do everything not to lose control of the judiciary.

So can it be said that Dukanovic's DPS, and the other parties that were part of government coalitions in previous decades, spoke using European language while ruling in an authoritarian way?

Yes, one might say. The way they ruled was absolutely authoritarian. We do not have a democracy that works. It is also true that all the foreign policy priorities of Montenegro coincide with the priorities of the EU and the USA. And it was this orientation that kept the DPS in power. The West has long supported the DPS government, which has used this support as one of the main levers to strengthen power. The rhetoric of the previous government was European, but the practice was authoritarian. It could be said that Montenegro had a system that coincided with those created in the former Soviet republics, Kazakhstan, Azerbaijan. A small group of people holding both political and economic power.

So someone has Aliyev, someone Nazarbaev and Montenegro Dukanovic…

If you look carefully, the biggest investors in Montenegro come from these countries. We have just completed an investment and investor survey in Montenegro. That research showed that they were mostly various Aliyevs, and Russian oligarchs. Anyway, a large majority of people from the East. The explanation is very simple: the way of doing business and managing a business is similar if not identical to the logic applied by the old regime in Montenegro. So, if you want to make a deal, you do not need to have knowledge, skills, a good project, ability to cope with obligations, to be competitive. No, the only important thing is to have a good connection with the highest authorities, i.e. the phone number of the right person to talk to. The door to a privileged position on the market, in business with the state, etc. is immediately opened.

The situation of media freedom in Montenegro was also the focus of a mission by the Media Freedom Rapid Response: the results in a report authored by ECPMF with contributions from Renate Schroeder of European Federation of Journalists and Luka Zanoni of OBCT

Let's go back to the position of journalists and the media in Montenegro. It sounds paradoxical, but despite the great pressure, the attacks, and even the killings, we still have professional and independent media in Montenegro and it is a fact that many in the Western Balkans cannot say the same. How do you explain this little paradox?

The fundamental thing is that in Montenegro the media regarded as pacifists in the 1990s managed to survive. Unlike for example B92 in Serbia, the Montenegrin media managed to survive and preserve an independent editorial policy. Thanks to this we have a couple of professional media outlets in Montenegro. However, it is colleagues engaged in investigative journalism who come under the greatest pressure. It also happens that journalists with strong political views are under attack. In other words, anyone who does their job professionally can be targeted.

Can journalists in Montenegro make a living from their work, that is, from the salaries they earn?

Very difficult. There is no free market and fair competition in Montenegro as in states that have a long or well-established democratic history. The advertising market is tightly controlled, and the members of the previous government still have the major advertisers in their hands and influence or try to blackmail the media. This is why independent media are constantly struggling to survive financially, especially in the previous period when only a few selected media could get advertisers and thus cash the money. The pandemic has further aggravated the position of journalists. Wages go down and the cost of living goes up. As a result, many journalists leave the profession and take up other jobs that can give them a better existence. The best journalists leave, but what encourages me is that young people with great motivation come up to investigate and work in this field. Journalism, generally speaking, is in crisis and the profession of journalist is no longer as prestigious or remunerative as it once was.

Finally, how do you see the increasingly heated rhetoric relating to the enthronement of Metropolitan Joanikije in Cetinje? Does it have something to do with a series of events not favourable to the old regime: the new Council of the Prosecutor's Office, the new management of the Radio-Television of Montenegro, the changes in the board of directors of Prva banka? Is President Dukanovic's power crumbling?

There is some truth. But there is also great polarisation in society. And that is not good at all. The divisions are deepening. I have friends who have stopped talking to me because they think I have betrayed the nation. This is the atmosphere that brings water to the mill of those who have ruled Montenegro for 30 years. The consolidation of Montenegro and the implementation of the European agenda are not in the interest of the DPS. The only thing they can offer is vulgar nationalism. Serbian President Vucic, on the other hand, is blowing on the crisis trying to compensate for the loss of Kosovo with Montenegro and Republika Srpska. There are several big games going on that are not, at all, in the interest of the citizens of any country in the region, the problem is that we do not know how this is all going to turn out. I just hope the bad part of our recent history does not repeat itself.