Peripheral comments on the EU audit report on Kosovo 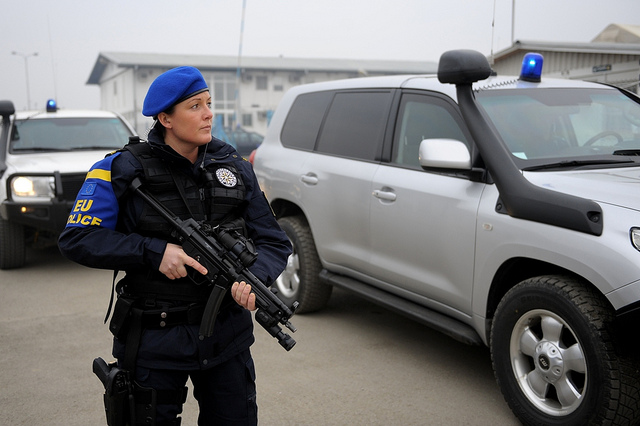 The Eulex mission in Kosovo is failing, in spite of its clever media campaign. A comment

The European Court of Auditors has just published a report on the efforts made by the EU to improve the rule of law in Kosovo. The report has already been discussed in the media, and also I have commented recently . Here I shall deal with some aspects that might not have received the attention they deserve.

The report deals at length with the EU rule-of-law mission, called Eulex: this is the largest mission ever deployed by the Union, and was proclaimed the “flagship” of its common security and defence policy. The main finding is that Eulex’s performance of its advisory functions was generally ineffective, and produced no results precisely where they were more acutely needed: organised crime and corruption are the main obstacles to Kosovo’s democratic, social and economic development, but today Kosovo’s authorities are just as unable to confront them as they were in November 2008, when the mission’s nine-month long deployment was completed. As perhaps 70% of the staff of the mission worked in police and justice advisory work, one could stop here.

But let’s continue, because the report praises Eulex’s work on customs, which is judged “largely successful”. The foundation of this conclusion, however, is weak. It is true, as the report says, that customs revenue grew by 32% between 2007 and 2010, but in the same period imports grew by exactly the same percentage. As customs revenue depends on imports, this means that Eulex neither worsened nor improved the customs service, which is exactly what it did in the police and justice sectors too.

The real reason of that praise, therefore, is that already in 2007 Kosovo’s customs service was working rather well and far better than the judiciary or the investigative police. And it had to work well, for since 1999 the vast majority of budget revenue was always collected at the border: without an efficient customs service there would not have been enough money even to administer Kosovo, let alone invest in its growth. Which is why in the past ten years the EU (working through its contingent in the UN mission administering Kosovo) devoted considerable attention to customs and had – by 2007 – managed to build a rather good institution. The tax administration, conversely, is markedly less efficient: a serious problem, because budget revenue cannot continue to depend on volatile imports but must find a broader domestic base.

Hence the real question – which the report does not ask – is why did Eulex divert part of its scarce resources to customs? Precisely because – Eulex’s clever public relations people will implacably retort – customs revenue is so crucial to the budget. True, but public revenue is at risk not only when it is collected but also when it is spent. In particular, while the customs service collects 700 million euros, every year Kosovo’s procurement officials spend a hundred more (almost 800 millions, the report says). And the procurement system is – and in 2007 already was – deeply corrupt and very inefficient. The result is that the money collected at the border under Eulex’s watchful eyes is stolen a few days later in proportions varying from 10% to 90%, according to recent findings on procurement practices by Kosovo’s own auditor general: Sisyphus comes to mind.

The strategic mistake, which carried a significant opportunity cost, was not choosing between customs or procurement or tax administration, but dividing Eulex’s forces: the two generals that have led the mission should have remembered their army manuals and concentrated all their resources on strengthening the weakest of Kosovo’s institutions – the crime-repression system – and on investigating organised crime and corruption. For corruption is a cross-sectoral phenomenon, and a determined effort to reduce it would have had positive effects on all public services: customs, procurement, tax collection, health, education and so on and so forth.

What about the executive functions?

Regrettably, they were not included in the scope of the report. A charitable choice, because Kosovars and readers of Osservatorio Balcani e Caucaso know that the mission made very bad use of them.

I shall just recall the arrest of the innocent governor of the central bank, which unnecessarily damaged Kosovo’s best institution, the failed two-year investigation on systematic corruption in road-building, the failed two-year investigation on political assassinations, and the absence of any serious investigation on the dossiers and documents I had sent them concerning corruption in the telecom and energy companies, in the privatization agency, in a huge highway contract, in the education ministry, and on some prominent members of Kosovo’s élite, such as Ekrem Luka and the late Dino Asanaj (a friend, as I wrote, sed magis amica lex).

The balance seems clear. Advisory functions: zero results and a strategic mistake. Executive powers: Eulex did catch some small fish, but for the rest we only observed inaction, failures and mistakes; which went mostly to the benefit of Kosovo’s prime minister Hashim Thaci and his circle, and therefore went to the detriment of Kosovo and – I argued elsewhere - also of the EU.

But there is more. Three years ago Eulex arrested and jailed three Serb farmers living in a rare mixed village, where Serbs and Albanians live next to each other. The arrest was for war crimes committed in 1999 against Albanians. It was a special operation: at dawn, smashed doors, automatic rifles, shouts, darkness, cries, blows, handcuffs. It took place on 23 September 2009, when Kosovo’s government and public opinion were still very angry for an agreement (on police cooperation) that Eulex had just signed with Serbia. A coincidence? I doubt it, because the arrests received wide media coverage and helped restore the popular image of the mission at a difficult juncture. In this case, however – and only in this case – Eulex’s website published only the operative part of the judgement that found the accused innocent of all charges: without reading the motivation you and I cannot check whether the charges had at least some foundation. I am skeptical: how many other suspect Serb war criminals still living in Kosovo have been arrested in the last ten years? None, I think. All criminals had fled after 1999. And why would such criminals as those three farmers still be living in their village, in peace with their Albanian neighbours, if they had committed war crimes? I am not saying that Eulex invented the charges: perhaps there were reports, possibly dating back from 1999 and maybe sent by someone who wished to take their land. What I suspect is that Eulex resurrected that file only in order to score a public relations victory.

In short, with only minor exceptions, Eulex’s line was to be helpful to Thaci, the leading faction of Kosovo’s élite, weak with the strong and strong with the weak. But even if you think that I exaggerate, you will agree that excluding the executive powers from the scope of the audit was a blessing for Eulex. Whereas the mission told the press that it regrets this exclusion, implying that it prevented the auditors from seeing the good work it did.

Such intellectual dishonesty is reproachable but perhaps justifiable of such a mission. Less so their clever media campaign (you must have seen it: first the phrase “Eulex did nothing against corruption” appears, then a red question mark pops up, followed by some facts and numbers that should lead you to reject with that statement). That campaign begun when Eulex already knew the conclusions of this report: they were preparing the ground for their defense. But in whose interest did they launch it: that of the EU, of the rule of law, or of their management? That campaign is a misuse of public money, although a minor one compared to the more than one billion euros that this mission has thus far cost to the European taxpayer.