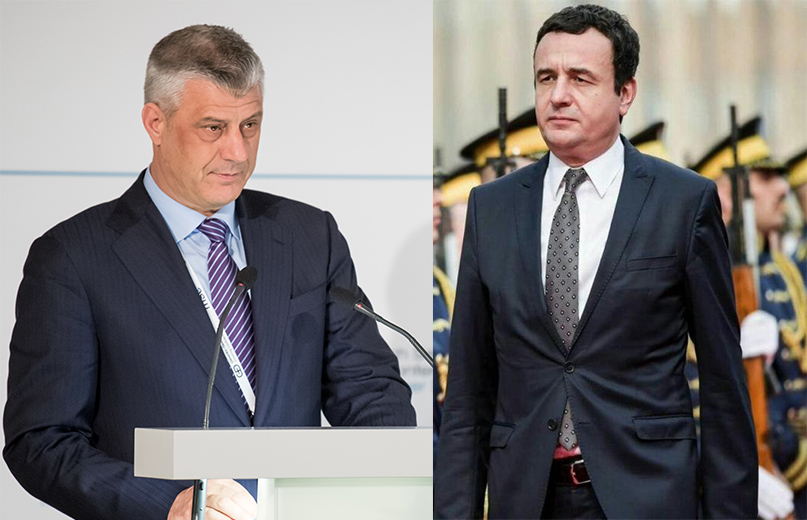 In the midst of the COVID-19 pandemic, Kosovo is grappling with a political crisis: the struggle between President Hashim Thaçi and no-confidenced premier Albin Kurti. The victim of the clash could be – once again – the country's constitutional structure

Should Kosovo prepare for holding the new elections after the coronavirus pandemic ends, or should President Thaçi step in and create a new government with the current members of parliament? These are the two major questions concerning public opinion in Kosovo in the middle of a pandemic crisis and after almost a month since the no-confidence vote that brought down the government led by Vetëvendosje's leader Albin Kurti.

The Democratic League of Kosovo (LDK), which was a junior partner in the government, initiated a motion of no-confidence vote because of ongoing disagreements with Vetëvendosje on the dialogue process between Kosovo and Serbia and on managing the health crisis.

On March 25th, on LDK's initiative, the Kosovo parliament voted a no-confidence motion which was passed with 82 votes in favour, 32 against, and one abstention. The way out of the political crisis which followed is still not clear, and the political deadlock is becoming extremely complicated.

This is not the first time that the Kosovo political system has to react to a no-confidence vote: in 2017, for example, the President immediately dissolved the parliament after the then government, led by LDK's leader Isa Mustafa, lost a confidence vote. Wasting no time, Thaçi called for snap parliamentary elections.

Vigan Qorrolli, a legal expert in Prishtina, told OBCT that President Thaçi should do the same now. However, this is not happening as President Thaçi is trying to convince Kurti and his party to propose a new candidate for prime minister.

"The only legal and constitutional option to create a government without the winner of the last elections is that the political party – in this case Vetëvendosje – should send a letter to the president of the country saying that it is not interested or cannot form the government", says to OBCT Vigan Qorroli, lecturer at the Faculty of Law of the University of Prishtina.

This would mean that the second largest party will take over the right to form the new government.

According to Kosovo's Constitution, Article 82.2, the Parliament may be dissolved by the President of the Republic of Kosovo following a successful vote of no-confidence against the government.

The “may” in this article is part of public and expert discussions as it is regarded as a magic bullet for the President, that gives him discretion to avoid snap elections or, alternatively, to create a new government with the current parliament.

Qorrolli says that, in Albanian, the verbs “do te, duhet apo mundet” (English: “will, must or may”) have equal value in legal proceedings, referring to cases managed by the Supreme Court in the United States.

Vetëvendosje cannot nominate the same person for prime minister. Moreover, Kurti's party lacks the support of other parties in parliament to form a new government. However, Vetëvendosje decided not to respond to the President's call for nominating a candidate; preferably asking for clarifications on the President's approach and his understanding of the constitution.

Seb Bytyci, from the International programme in Politics and Economics at the University of London, told OBCT that a constitutional provision which was intended to show supremacy of parliament over the President has unintentionally created confusion and allowed the President to employ his discretion.

"The statements of the framers and previous practice suggest this 'may' should be interpreted as the parliament giving permission to the President to formally dissolve it so new elections can take place", said Bytyci to OBCT.

Letters in a crisis

As the number of Kosovo citizens infected with coronavirus is rising day by day, heads of state and party leaders are putting lots of effort and energy into major political issues, such as creating a new government.

At least seven letters have been exchanged between President Thaçi and acting Prime Minister Albin Kurti. Thaçi called Vetëvendosje to nominate a new candidate for Prime Minister, while Kurti is expecting Thaçi to do what he did in 2010 and 2017 and call for snap parliamentary elections. In his letters, Kurti asks for clarifications of the legal ground for Thaçi's actions.

"What is not clear to me is the double standard that you and the other political parties are trying to impose in non-constitutional paths after the vote of no-confidence, which is not different in form and content from the previous practices in the country", says Kurti in his fourth letter to President Thaçi.

The letters themselves seem to be an attempt to create a reason to send a case to the Constitutional Court.

"If Vetëvendosje receives a letter from the President which explicitly states a path forward different from calling for new elections, and this represents sufficient ground for a case that the court can make a judgement on, this could potentially lead to the fall of the President from power if he is in breach of the Constitution," Bytyci added.

On the other hand, the Kosovo Democratic League (LDK) has expressed the will to be part of a new government – possibly led by one of its members – since the fall of the government. LDK is accusing Vetëvendosje of not managing properly the current health crisis, especially when it comes to financial issues, while some LDK ministers are still on duty under the umbrella of the Vetëvendosje-led government. LDK also considers that Vetëvendosje, while in power, is damaging the relations with the US.

A precedent that will agitate Kosovo's fragile democracy

In the middle of a pandemic, Kosovo risks a unity government and creating a constitutional precedent where smaller political parties, or those who did not win the election, will have the chance to lead the country.

This situation is possible if President Thaçi gives another political party mandate to form the government without Vetëvendosje refusing the call.

Seb Bytyci emphasises that, if such a precedent is created, it would be concerning for Kosovo's already imperfect democracy.

"It would mean that small kingmaker parties can simply switch sides without repercussions and form a government with the highest bidder. This will have severe implications for democracy, but also for corruption, as this will certainly increase waste as parties will try to outbid each other with offers of new ministries/portfolios and other forms of political power such as appointments in boards of public enterprises and public universities", he added.

As the procedure to form a new government has no deadline, it was anticipated that Kosovo would have a caretaker government for the time being. However, the situation on the ground is changing rapidly as President Thaçi tweeted on Sunday evening that he is going to open paths for forming the new government soon.

"Next week I'll take the final constitutional steps to enable the formation of a new government with full legitimacy from parliament, capable to fight Covid-19 and serve the people. Tariffs and reciprocity need to be dropped in order to strengthen USA & EU support for Kosovo", tweeted President Thaçi.

This was retweeted by US special envoy Richard Grenell who expects the restarting of the dialogue process with Serbia very soon.

"Once tariffs/reciprocity are dropped (maybe this week?), then Dialogue begins in earnest", Grennell tweeted. “I’ve spoken with leaders in Serbia and Kosovo to make clear they must start building confidence today in preparation – and they’ve committed to do so”.