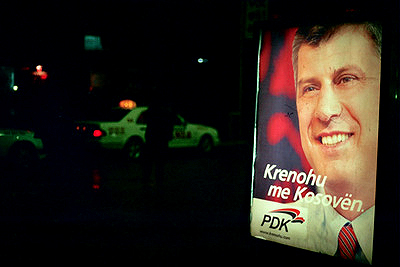 Days after the 15 November elections in Kosovo, unorthodox agreements have caused a rift between the coalition partners in the Pristina parliament. Prime Minister Thaci's PDK threatened to break up with President Sejdiu's LDK, but its attempt to dictate the political agenda to its junior partner clearly failed

On the morning of 20 November, Kosovo woke up with a split government. All media reported on the Democratic Party of Kosovo (PDK) announcement of substantial shifts to be made in the government, with a sudden involvement of opposition parties as new coalition partners in place of its current and "unnatural" partner - the Democratic League of Kosovo (LDK).

Both PDK and LDK leaders put an end to PDK's political adventure, which lasted no more than twelve hours. In the morning hours of that same day, both party leaderships claimed to be "fully committed to the partnership in state building processes", and that the government coalition was going to last until the natural end of the legislature, in 2011.

There was no respect for state institutions, however, when the news on the break-up was announced by the ruling party before midnight on 19 November. Deputy Prime Minister Hajredin Kuci (PDK) notified his LDK counterpart that the junior party would have to make way for the New Kosovo Alliance (AKR) led by tycoon Behgjet Pacolli, (who was allegedly becoming the new Kosovo President), and for the Democratic League of Dardania (LDD) of Nexhat Daci (who would win back his post as assembly chairman).

The overnight deal, though, was never to become real, while the opposition parties claimed to have been left in the dark on coalition talks. Moreover, the shift could not be supported constitutionally. Article 82 of the constitution notes that a government can collapse from a vote of non-confidence supported by two thirds of the parliament, (or 80 MPs), an amount that the PDK could not assemble with the new coalition format.

The International Civilian Office (ICO) reminded the Deputy Prime Minister Kuci to be careful. Pieter Feith, head of ICO, initially agreed that democratic countries change ruling parties, but stressed that this has to happen while always respecting the constitution.

Kosovo President Fatmir Sejdiu made no statement regarding the latest political developments, but rather preferred to hide behind a "no comment" strategy; at the same time doing his best to keep the party he leads (LDK) in the government coalition established two years ago.

Days after the political unrest, PDK changed course and has now listed a series of demands for its junior partner - including replacing current ministers. Initially it was reported that the LDK would agree to meet this requirements to save the coalition. LDK, however, is widely ignoring other demands such as rejecting coalition agreements with opposition parties for the second round of the administrative elections, which is believed to be the initial cause for PDK to threaten the coalition at the central level.

LDK announced coalition agreements with the Alliance for the Future of Kosovo (AAK) of the former prime minister and opposition leader Ramush Haradinaj and secured itself support against PDK in many municipalities. In the first round, LDK won in three municipalities, including a landslide victory in Pristina, where the coalition partners clashed fiercely during the election campaign.

Prime Minister Hashim Thaci claimed that his PDK is going to win 20 out of 36 municipalities, but has until now confirmed only five victories after the first round, and for the second round is leading in 13 municipalities.

The opposition AAK could easily claim a "success" in the 15 November elections: the party almost doubled their votes compared to 2007 and dominated in the western Kosovo, home region of the party leader Haradinaj.

However, a convincing victory in Gjakova for AAK has been recently annulled by the Central Electoral Commission, due to manipulation of votes in eight stations, holding about 1500 votes. The decisions on whether the town will go back to ballot boxes in December is pending a review of some other complaints.

Despite the fact that in these years elections in Kosovo have been regarded mainly as free and fair; annulment of votes is not a new phenomenon.

On 19 November, domestic observers underlined a number of "minor problems" on the election day, but offices across the European Union will read the reports of the international observers. The European Network of Election Monitoring Organizations (ENEMO) said the elections "generally met the standards" after inspecting 70 stations on elections day (about 3% of the total number).

However, the process is undermined by issues such as falsified signatures, physical threats on commissioners, and thousands of names of dead continuing to appear in the voting lists. However, after the elections polling stations closed, local and international officials immediately proclaimed truly free and fair election.

The "international standards" apparently are met when an election process ends without shootings or inter-ethnic confrontations.

A surprising turnout was registered among Kosovo Serbs, especially among those living south of the Ibar river. Thus, Serbian parties won in the three newly formed municipalities. Municipalities on the northern border with Serbia generally boycotted the elections. A further division among the Kosovo Serbs could take place soon, as Belgrade announced cutting of all benefits to the un-loyal citizens embracing Pristina institutions.

Bonds between coalition partners in Kosovo have traditionally ignored political programmes. Archrivals before 2007, PDK and LDK chose to co-govern at the central level after emerging as the two biggest parties - justifying their agreement to their voters as a political sacrifice on the verge of Kosovo's unilateral declaration of independence.

Back then, LDK accepted to be dominated by the senior partner in the coalition and also agreed to a series of conditions set by PDK. Before this "unnatural" partnership, LDK had governed with Haradinaj's AAK, a coalition which is now being re-established at the local level, a move which could be seen as the first indication to early preparations for 2011 general elections.

The PDK tactics used on 19 November to threaten its junior partner and dictate its political activities evidently failed. Besides recently forming one or two small coalitions, PDK has been very restrained about rushing into partnership with other political parties. Apparently, PDK will head stubbornly alone into the second round to determine who retains control in most municipalities.