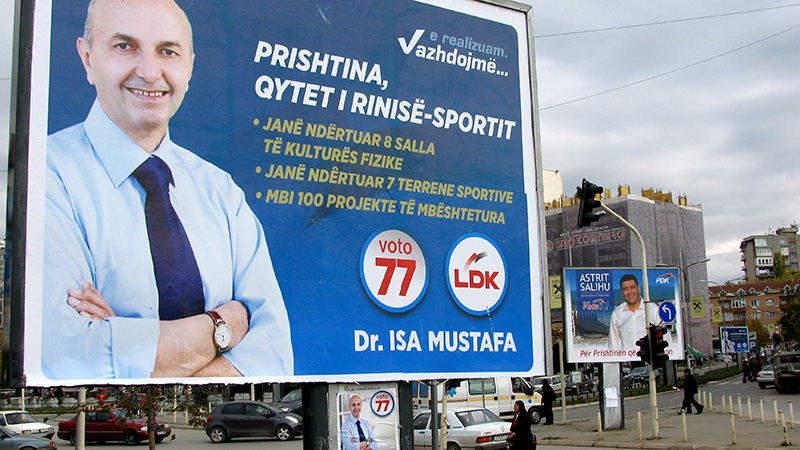 Tensions between LDK and PDK in view of Kosovo's local elections of November 15th. Bitter fights over the control of Pristina, the likely boycott from Kosovo Serbs. The electoral campaing in the chronicle of our correspondent

Current Pristina Mayor Isa Mustafa's portrait is displayed on advertising sponsored by both his political party, the Democratic League of Kosovo (LDK), and by its major rival, the Democratic Party of Kosovo (PDK). From a distance, an observer could think that the coalition between the two biggest parties works in such a perfectly harmonised environment that they even support each other's candidate. However, that would only be an illusion because the parties are sending completely opposing messages.

LDK's mayoral candidate, Mustafa, is running for a second mandate, while the PDK has built its campaign on portraying Mustafa as the mayor who "failed to manage" Pristina.
Accusations between PDK and LDK have now marred the election campaign, which started more than a month before the 15 November elections.

PDK's early start of campaigning prompted LDK and opposition parties to jointly object to the Central Elections Commission (CEC), which then denied their complaint. The negative campaign against Mustafa sparked LDK to react by preparing a lawsuit against PDK for "privacy violation".

As coalition partners, the PDK and LDK, have accused each other for failing, on one side, and obstructing, on the other, the passage of a law to give Pristina the status of Kosovo's capital and thus enabling it to receive more benefits than the other municipalities in Kosovo.

From one accusation to another, the governing coalition shows the first signs of major disagreements after almost two years of a partnership in the legislative assembly.
After winning the November 2007 general and local elections, PDK joined into a coalition with LDK, in a move that some experts saw as an "artificial coalition", because the two have a history of conflicts. For the first time, PDK defeated LDK in elections. However, Pristina has been run by LDK since the first post-war elections held in 2001.

"The government can function even without LDK," said Deputy Prime Minister Hajredin Kuci at the end of October, responding to a statement by current Pristina mayor Mustafa. Earlier in the campaign, Mustafa predicted an early collapse of the current government, a comment that followed other anti-PDK statements by LDK officials.

The fight between Kosovo's two biggest parties indicates the importance of controlling Pristina, and which, according to some experts, can also determine the fate of the government.

"Whatever result Pristina brings, the future of the PDK-LDK coalition will be decided at the negotiating table," says political analyst Baton Haxhiu. He believes that the fierce political campaigning will continue until the elections, while the negotiations on future coalitions will be discussed between the parties after 15 November.
Another political commentator, Valon Syla, believes that the accusations between the parties will continue, but will not damage the coalition. Syla says, "The coalition (between PDK and LDK) will see changes only if LDK becomes stronger (in the 15 November elections) and PDK loses ground."

The 15 November local elections are the first to be organized since Pristina declared unilateral independence on 17 February 2008. Municipal representatives elected in the upcoming elections will win a four-year mandate compared to the current two years. Previous elections proved decisive for Prime Minister Hashim Thaci's PDK, who won in 17 municipalities.

The party seeks to win more ground at the expense of their rivals and coalition partners - the LDK led by President Fatmir Sejdiu. Thaci has personally supported party candidates at joint rallies during the election campaign. These actions are strongly criticized by his coalition partner and opposition parties who accuse him of "forgetting his government duties".

Since the start of the campaign, a series of events has pressured the government. The European Commissions' progress report published a day before the official launch of the campaign (14 October) identified "black stains" since Kosovo declared independence 20 months ago. The report painted a troublesome picture of Kosovo and noted political interference in high-level appointments in the civil service, inadequate investigations into allegations of judicial corruption, and "porous" borders with neighbouring states.

The European Broadcasting Union (EBU) asked the Kosovo government to stop interfering with the editorial policies of the public broadcaster RTK and quickly find a solution for a stable financial support to the institution.

Elsewhere, in mid-October, 16 irregular immigrants were reported drowned in the Tisza River - on the Serbian-Hungarian border - on their way to the European Union. Nine victims have been identified so far while another seven are missing.

Thaci's government managed to either escape responsibility or favourably present these events in order to avoid political influence during the elections. The European Commission report was introduced as "another historic achievement" by Thaci because it engages Kosovo in a visa-liberalization dialogue and a preparation process for a trade agreement. Thaci also invited the EBU officials to visit Kosovo and witness "balanced reporting of RTK".

Regarding the Tisza incident, the government was content to delegate the investigation to the European Union Rule of Law Mission in Kosovo (EULEX), while the President designated a countrywide mourning day for the victims on 2 November. (The day after former US President Bill Clinton unveiled his statue in a high state-level ceremony in Pristina.)

Nevertheless, Thaci campaigns throughout Kosovo with promises to assure drinkable water, jobs, schools and roads. His offer stretches to hundreds of millions of euros of capital investment if PDK candidates win.

Other candidates and political parties are also promising improved welfare if they win a mandate; however, the parties offer stereotypically similar programmes. The political parties' programmes do not correspond with their left, central or right wing ideologies.

Economic experts consider the campaign promises (for example, to create thousands of jobs by municipalities) as impossible to implement in the current economic environment.
Funding of the campaigns remains a secret of the political parties, who failed to deliver this aspect of accountability because of the legislative assembly's inability to adopt a law.

The political parties are also indifferent as to whether their candidates have criminal records or are currently under investigation. The latest case of corruption involves Agim Veliu, the LDK candidate for mayor of Podujevo municipality in northeastern Kosovo. A prosecutor launched investigations against him for possible abuse of power during his tenure as education minister in the previous government.

Also under investigation is the current Podujevo mayor, Xhabir Zharku, who is running for a second mandate as the PDK candidate. Arrested twice during his mandate for kidnapping, Zharku is currently under investigation for obstructing a legal process.

In addition, from the ranks of PDK, Sami Lushtaku seeks a second mandate as the undisputed leader of Skenderaj. Lushtaku spent three and a half months in prison after being found guilty for threats, obstruction of an official's duties and weapon possession.

The upcoming local elections have a new coalition between the New Kosovo Alliance (AKR) and the Democratic League of Dardania (LDD). The parties joined forces after each secured a significant result from their first test in 2007 elections.

This unique partnership offers political management by Kosovo tycoon Behgjet Pacolli as the head of AKR, alongside the head of LDD, Nexhat Daci, one of the few intellectuals and university professors active in the political scene, as well as a former legislative assembly speaker. The Pacolli-Daci coalition seeks to defeat the current governing coalition in a few municipalities.

A more social and "for the people" context is presented by the newly established Socialist Party, and the politically emerging Social Democrats. A former prime minister, Agim Ceku, who is also one of the most respected figures as a former commander of the Kosovo Protection Corps (KPC) for seven years, leads the Social Democrats. They intend to establish a local constituency and plant themselves in the political scene.

In addition, the Central Elections Commission (CEC) is in final preparations for the election. Kosovo's highest elections body has been criticized for not clearing the estimated thousands of deceased voters from the voting lists.

The CEC has given up on opening any polling station in the Serb-dominated north of Kosovo. A US-based NGO has stepped in to fill the gap. In cooperation with the OSCE, the International Foundation of Election System (IFES) has the mandate to organise the voting on behalf of CEC in northern Kosovo.

Despite the efforts, Kosovo Serbs are expected to boycott these elections, even though decentralisation includes three Serb-dominated municipalities for the first time.
According to CEC, among 74 political entities certified to participate, 22 are managed by Serbian minority representatives.

The CEC has certified 1,563,741 eligible voters for the municipal elections, or 30,000 more voters compared to previous elections. The process will be monitored by 20,000 domestic and 1,000 foreign observers.