Kosovo Serbs, Confusion over the Resolution 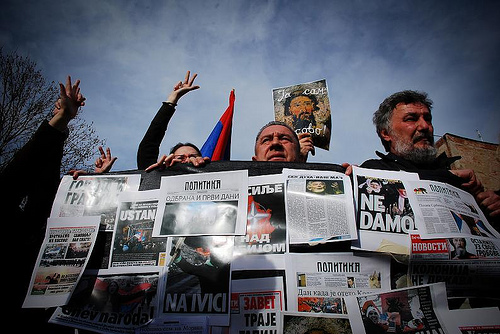 On 9 September, the UN General Assembly adopted a compromise resolution on Kosovo submitted by Serbia and supported by the EU. Kosovo Serbs seem to be confused over what Belgrade’s move actually means, and if this is going to change something in their everyday life

After the summer holiday season, northern Mitrovica is again lively. Students have returned; schools have started. Young people crowd the dozens of cafes lining the streets. Farmers from nearby villages and Serbian enclaves sell late-summer produce; people from other rural parts of Kosovo finish their daily business in Mitrovica North.

Apparently, the town’s usual daily routine is undisturbed. A week has passed after Serbia’s hard talks with the EU to harmonise Serbia’s original draft resolution submitted to the UN General Assembly.

The public widely interprets the softening of the resolution as the new Serbian defeat on Kosovo issues.

Local opposition leaders spread severe criticism throughout the community against the current government’s policy on Kosovo; in particular, they accused President Tadic of “selling Kosovo for the EU”.

Local Serbs and mainly opposition leaders met in Mitrovica to request the Serbian parliament dismiss Boris Tadic from his current position due to his “wrong internal and foreign policy”. They call him “the greatest traitor in Serbian history”, while a local member of Tadic’s party and Serbia's minister for Kosovo and Metohija, Goran Bogdanovic, has lately intensified his rhetoric on the “urgent need” to sit and talk to Albanians.

Ordinary people in Mitrovica are confused when asked to explain what the resolution really means, which comes months after they optimistically supported the foreign minister’s personal lobbying against Kosovo’s independence.

Ana Ivkovic, 23 years old, a Serbian student in Mitrovica of social work regularly follows news on Kosovo and notes: “I think that Tadic and Jeremic are trying to save what can be saved now. They are struggling for our better status, which means to remain in Serbia rather than have Kosovo’s institutions here.”

“Yet, I feel as if people are afraid of being left out by Belgrade,” adds Ana and explains how she hears people around her accusing Belgrade of giving up on Kosovo Serbs. “But I am not really convinced if they truly believe in their own words, because, at the end of the day, they still continue receiving salaries from Belgrade, or any other assistance, and they are deeply attached and incorporated within the Serbian system.”

Asked whether things will change, Ana answered: “I think that nothing will really change in the next year, but, on the other hand, I think that the time has come when something should really change… perhaps our status on paper, but anyhow, it won’t reflect our everyday life”.

Ana adds she cannot really imagine a future for her family staying in the north of Kosovo. “Not with this violence”. she says, recalling the latest incident happened two days after the Serbian-EU resolution received support in New York. Everything started when hundreds of Albanian youth came to the middle of the main bridge, which divides the two parts of the city, shortly after Turkey defeated Serbia at the World’s Basketball Championship in Turkey.

Sasa Radosavljevic, 38, owner of the famous Dolcevita Cafe, next to the main bridge, described what happened on Sunday evening. “We were sitting in a cafe in an outdoor area, watching the match. It was chilly and quiet outside, only a few of us remained, but the cafe was crowded. Everybody was watching the match.”

“But as soon as the game was over, we heard noise coming from the south and we saw people rallying there in hundreds. Then, a large group of Albanians came to the middle of the bridge chanting ‘Turkey, Turkey! UCK, UCK!’ Serbs responded back, chanting ‘Serbia, Serbia!’, and that’s how rock throwing started and shooting as well, before it was halted by international police.”

Sasa adds, “I think it was a test balloon, and it could be connected to latest event about the new resolution, to provoke our reaction.” He expected some changes after the adoption of the resolution, but says, “It did not happen yet.”

“I talk to many people every day. Some people did not want to comment about the resolution.” says Sasa. “I guess, we have passed through so many things here in the past years, so it is just one more win for them,” he emphasizes and then points to the south from his cafe:

“There will be more pressures certainly, and also more pressures on Belgrade.” Sasa, emphasizes, “But people get used to live under pressure on daily basis here. I don’t think that things will change many, many years from now.”

Ivan Radic, 34, a physician from Urosevac, a city in southern Kosovo, has been displaced in Mitrovica since 1999. He regularly travels around the remaining Serbian enclaves in south Kosovo and often talks to Serbian villagers there about the situation.

Ivan says, “People in the south are really afraid, but frankly, they are not either that interested in what is going on. In their hard life, they have turned a deaf ear to everything, as feeling too weak to change anything. But I see that they are quite disappointed with the current Belgrade government.” He emphasizes that some new government would have better results on the ground for Kosovo Serbs.

Ivan observes, “I think that there won’t be much change after the resolution, because the Security Council and Resolution 1244 cannot be excluded. However, I do I think that we embarrassed ourselves with accepting the current content of resolution, which is a bad message for those countries who have not recognized Kosovo’s independence.”

Zeljko Tvrdisic, editor-in-chief of local radio station Kontakt Plus Radio says that most of Kosovo Serbs, in spite of their criticism, are not really aware of a “broader picture” and the long-term implications of a "new" Belgrade’s policy to their future life. He says, “I am afraid that Kosovo Serbs are not really aware of this government’s slow turn regarding its policy in Kosovo. The resolution has not resulted in any concrete effect on the ground for the time being, and any changes will depend strictly on Serbian authorities. What I see concretely is that Kosovo Serbs, in particular here in the north, will have to accept any decision from Belgrade, even if we are damaged.”