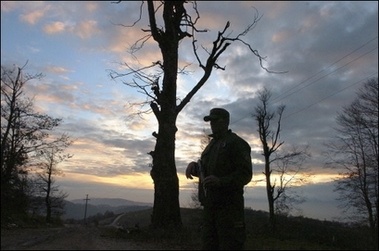 In the few days following Kosovo's declaration of independence, Macedonia remains calm. But for how long? February 17 was greeted differently by the country's two major communities. Whereas Macedonians exercised restraint, Albanians rejoiced

In the few days following Kosovo's declaration of independence, Macedonia remains calm. But for how long?

February 17 was greeted differently by the country's two major communities. Whereas Macedonians exercised restraint, Albanians rejoiced. Major celebrations were organized at the new Skenderbeg square in Skopje (old bazaar area) and in the center of Tetovo. Speeches, dances, and the inevitable shooting in the air, but nothing out of the ordinary. A few cars hit by (probably falling) bullets, but in any case less damage than from a new year of bigger football match.

Newspaper space is crowded by Kosovo coverage, but the government continues its policy of silence.

"The government closely monitors the situation, and it will act in accordance with national interest" is the boilerplate statement to be heard by the spokespeople.

The elephant in the room is, of course - when? When will Macedonia recognize Kosovo? Although the government (probably rightfully) does not put the cards on the table, the question "will Macedonia recognize Kosovo" has lost on significance. There is little doubt that Macedonia will have to follow suit and at a certain point recognize the new neighbor. The government has been long reiterating that it would do what the international community does, and the US and major European states have already stepped forwards and recognized the province.

The fear is, however - the response from Serbia. Even if Serbia does not go with direct sanctions, and at this point in time it is difficult to assess the full extent of direct measures Serbia would be willing to take, Macedonia could be hurt economically by Serbia in many ways. A gathering by the business community the other day voiced the concern that Serbia could promote more "indirect" sanctions against Macedonian businesses in the case of recognition of Kosovo. Enough to stop cargo at the border on whatever excuse, and that is just the beginning.

For the time being, the government, as it tirelessly points out, only "closely monitors." Defense Minister Lazar Elenovski stated the other day that "Macedonia's position on the issue was clear and that independence was acceptable". Government spokesman, Mr. Ivica Bocevski hurried to state that "the statement was Mr. Elenovski's private position on the matter."

On the afternoon before "D" day, Kosovo's Prime Minister Hashim Taci came for a quick visit to Skopje, on what the Macedonian government called an "informal visit". A day before, Macedonian Prime Minister, Nikola Gruevski, spoke on the phone with Serbian President Boris Tadic. Although no further official statement came out of those contacts, one can easily guess the ground those talks had covered.

Of course, the sizeable Albanian community in Macedonia wants Kosovo recognized. Albanian political parties will be expected to insist on prompter recognition. Whereas the Albanian partner in government, DPA of Mr. Menduh Taci, could demonstrate more patience, the opposition DUI would use the recognition issue as a political instrument.

Mr. Taci's DPA said Macedonia would do what the others did "We would not be the last ones to do it" said Mr. Iliaz Halimi, Deputy Defense Minister.

The other major Albanian party, opposition DUI welcomed the independence and called upon the government to recognize it. Its leader Ali Ahmeti, visited the graves of fallen guerilla fighters from the 2001 Macedonia conflict. "This is a great day. Our dream has come true", state Mr. Ahmeti for the occasion.

In the meantime the political party of the Serbs in Macedonia has strongly condemned the declaration of independence. Its leadership went to Kosovo on Sunday the 17th to show support to fellow Serbs in the north.

The issue that resurfaced in Macedonia right after the declaration of independence is that of the Macedonian - Kosovo border. This border has stayed un-demarcated due to Kosovo's undefined status for years(Serbia insisted it was her border), and the issue has several times raised tensions in Macedonia.

The biggest Macedonian opposition party, the social democrats (SDSM) called upon the government to condition the recognition with demarcation of the border.

"The border can objectively be a factor of insecurity if we recognize Kosovo without a demarcation" stated former social democrat Prime Minister Vlado Buckovski.

The point of the view of Albanian parties is that the border is only a technical issue and it will be easily sorted out. According to DUI - after recognition.

A critical point along the border has always been the village of Tanusevci, the place where Macedonian conflict began in 2001. The village, which is practically at the very border, has been declared "free" by a former guerilla fighter, commander Hoxha, who says the place is under his command. He announced he would hold a referendum to join to village to Kosovo. Mr. Hoxha says Macedonian police cannot enter the village.

Worries have already been displayed over the long term possible consequences of Kosovo's independence for Macedonia. Only three days into the independence, the cake has not been eaten yet, the talk of the type "Macedonia will be next" has already begun. Dailies carried predictions by foreign analysts who warn of the risks to Macedonia from a possible de facto partition of Kosovo.

These risks have been well documented and analyzed in the past. It is no secret that the Macedonian conflict was a reflection of the Kosovo one. In the same vain, nobody should deny that the independence of the province will have huge impact on Macedonia.

This will definitely depend on what happens on the ground, especially in the northern part of Kosovo. According to some, partition is already an emerging reality there. Yesterday, angry Serbs burned KFOR border control posts between northern Kosovo and Serbia. They said they wanted to move freely on their land.

Discussing these long term possible risks is not exaggerated, even if a bit premature at this point in time. One needs to see how things will evolve on the ground.

For the time being, the Macedonian government "closely monitors the situation".