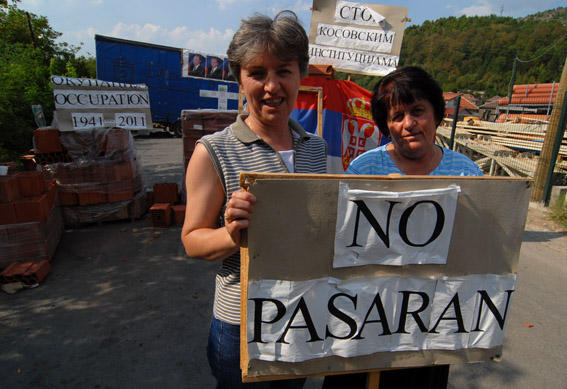 The referendum organised by four Serbian municipalities in North Kosovo riaffirmed their refusal to accept Pristina's authority. As expected, the vote was rejected by the Kosovo government and international authorities. But the referendum marks a turning point in the relationship between North Kosovo and Belgrade, which opposed it fearing repercussions on its EU integration process

According to preliminary results, 99.74 percent of the total 75.28 percent of voters who went to the polls voted “no” in a referendum where the citizens of four municipalities in northern Kosovo decided whether they "accept the institutions of so-called Republic of Kosovo", . Despite exceptionally bad weather, as well as the opposition of Belgrade, the high turnout of citizens was obvious. On the Day of Love and Wine (14th of February), for the first time in many days, the sun shone down on the deserted and snow-packed streets in the north, and from early morning on people trekked to the polls.

However, the votes of just over twenty-six and a half thousand citizens, who predictably circled NO to Kosovo institutions, are invalid on at least three sides: the Kosovo Albanians, international representatives of the West and also the government of Serbia. All three sides, since the end of last year, when local leaders in the north scheduled the two-day referendum during Serbia’s national holiday, February 14 and 15, have opposed its taking place, declaring it unconstitutional and minimizing its importance. "The referendum is invalid" is the almost unanimous assessment of the aforementioned parties.

For international representatives, who have been trying through Belgrade to influence the Serbs in northern Kosovo for several years, it is clear, however, that the north has de facto 'escaped' from the political influence of the government in Belgrade.

"I think that the situation in northern Kosovo at this moment is such that Belgrade really does not have that many effective ways to influence decisions being made there, which does not mean that it could not do so during past years. But I certainly think that Serbia should not be held hostage by the Serbs in northern Kosovo, and that granting of the status of candidate country to Serbia is the greatest help not only for Serbia, but also for all neighboring countries, including Kosovo, and therefore for the Serbs who live south and north of the Ibar River, too," said the European Parliament Rapporteur for Serbia, Jelko Kacin, on the eve of the referendum for Radio Free Europe.

Accusations that the remaining Serbs in Kosovo have been a burden to Serbia for a long time on its controversial road to the European Union have became more frequent since autumn, when the story about acquiring candidate status picked up new momentum. Previous moral support by government officials from Belgrade for Serbian barricades in the north dried up and transformed into implausible interpretations, and revealed a communication gap between Belgrade and northern Kosovo. Belgrade’s opposition to the referendum definitively marked the political discourse of Serbian government officials.

The story of the referendum was lodged between the two Godot-style European opportunities for Serbia, past – in December – and future – in late February. In the latter case, international partners have already indicated to Serbia that it will be a long wait. The referendum was also lodged between two rounds of talks between Belgrade and Pristina, and two illusory agreements: "the free movement of people and goods" through customs checkpoints, at the end of last year, which was strongly criticized by ordinary people, Serbs and Albanians alike, because it complicated their lives, and the adoption of which was the immediate cause for scheduling the referendum in the north; and the forthcoming international representation of Kosovo, the newest hurdle in the Serbian marathon towards Europe.

Votes far from the stage lights

The referendum, like a foreign body, was symbolically placed between two holidays celebrated by the two sides as their respective national holidays: the national holiday of Serbia, February 15, whcih has been celebrated since 2001 as a reminder of the First Serbian Uprising for liberation from the Turks in 1804 and the first Serbian Constitution in 1835, and February 17, the four-year anniversary of the unilateral declaration of independence of Kosovo.

Twenty-six and a half thousand votes from the barricaded and snow-bound northern Kosovo made an unremarkable impression in comparison with the parades of ceremonial uniforms, honor guards, medals awarded in two capitals, both of whom swore once again to guard their respective national interests and territorial integrity.

Finally, the unwanted baby was also renounced by the two state officials whom Belgrade considers to be authentic representatives of the Kosovo Serbs. The minister and the state secretary for Kosovo, both from the north, visibly in a state of mild shock, have repeatedly said that it was not appropriate for citizens to oppose their own government. They rationalized the high response by the citizens’ fear of local leaders if they failed to vote:

"It is clear that people were in a huge dilemma and under tremendous psychological pressure because failing to vote in the referendum would have been interpreted by local political leaders as support for the expansion of Kosovo institutions, but as far as I can see the vote was for the government of the Republic of Serbia or against it," said state secretary Oliver Ivanović for Tanjug news agency.

Before the referendum there was talk about the possible theft of votes. Some government officials were hoping until the last moment that the actual turnout of citizens would not be that high. Many Serbs in the north who are financially dependent on Belgrade were privately afraid to vote, fearing for their jobs. On the other hand, almost until the eve of the vote, there was a striking absence of electoral campaigning. A modest number of posters and billboards appeared a few days before the vote. The backbone of the campaign was a jeep that, like in the heydey of domestic films, cruised the snow-bound streets with the PA system playing a jingle with the seductive voice of the local municipal spokeswoman who, with musical accompaniment, called: "Everyone to the polls."

That the situation would turn out differently than state representatives hoped was indicated by the northernmost municipality of Leposavić, the home of the Serbian minister for Kosovo Goran Bogdanović, which remains under his strong influence. However, this time that influence was not enough to discourage the local government from holding the referendum in the municipality. Although the polls were open only one day in Leposavić, according to preliminary data, the results are similar to those from elsewhere.

Who are the voters?

The high turnout clearly indicates that party affiliation and political influence of the leaders have been put aside. The four municipalities in the north are headed by their respective mayors and municipal prefect, who are members of majority and minority political parties in Serbia. Since the beginning of the so-called July crisis, all local governments headed by these leaders have been completely unanimous in all decisions, including those opposing Belgrade. Although the headquarters of the majority parties in Belgrade attempted to influence local representatives to postpone the referendum at least, many members and supporters of these parties went to the polls.

"We were forced to decide to hold this referendum in order to once again let the international public know that we will not allow a solution to be imposed upon the Serbs in northern Kosovo,” said Krstimir Pantelić, mayor of Kosovska Mitrovica, for local KIM Radio.

There were also voters who were not sure of the answer. They voted at the urging of family, or because the majority was going to the polls.

"I have always believed my country, even when Slobo [trans. note – Slobodan Milošević] was defending us, and I was left without my home… But now? Is Tadić right that we should not vote? I don’t know, child, but I say, I will listen to my granddaughter, she took me to vote," said elderly Vera P., a refugee from the south of Kosovo, pointing to the fragile and silent girl who supported her by the arm.

Nonetheless, the general atmosphere is that citizens voted in visible fear of the threat of the possible dismantling of the Serbian state system and the establishment of that of Kosovo. For the great majority of Serbs this vote was a vital issue. In contrast to it, the alternative they see is the closing down of Serbian institutions and their integration into those of Kosovo.

"It really does not matter whether we will be forced into the institutions of Pristina in half a year or one year or five. The point is that we do not want to be part of a system that is alien and unnatural to us. It is the fundamental right of every human being to defend his system and to resist to the best of his ability the imposition of foreign values and culture with which he cannot identify,” said nineteen-year old Maja V., who voted for the first time.

"When spring is late"

There is an old Serbian adage: "The snow does not fall to cover the hill but for every beast to leave its trail.” The Serbs in the north have cemented a new barricade: the voice of the people by referendum against integration into the social system of Kosovo. Many politicians in Belgrade would like to leave the burden of Kosovo on the wayside, and to make the snow stay at least until the month of May, when the scheduled political elecitions in Serbia will take place.