Not a priority for MEPs on the right 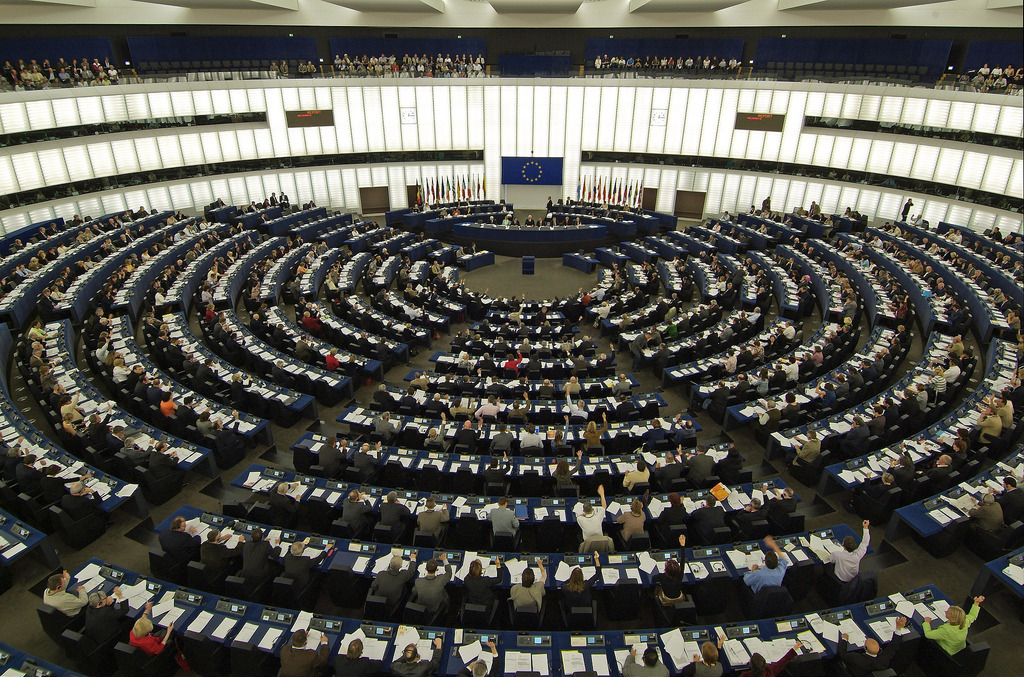 The European Parliament recently adopted a resolution on media freedom and pluralism. How many voted in favour, and how many against? Did geography and ideology make an impact on the vote? A brief analysis

On May 3rd 2018 the European Parliament approved a resolution dedicated to media pluralism and media freedom in the European Union.

The text of the document – driven by growing unease within the EP concerning the ever greater concentrations of media ownership in various European countries, the homicides of journalists Daphne Caruana Galizia and Ján Kuciak, and the increasing difficulties facing journalists just trying to do their job – confronts, among other issues, the risks connected with the digital world such as online bullying and child pornography, and its pervasive potential for the dissemination of disinformation and hate speech. The text also deals with journalists and whistleblowers – or civic informers – as subjects that European institutions should directly protect because of their fundamental role in the defence of the European values of freedom, pluralism and citizenship.

The centre and peripheries of Europe

The clearest opposition to the resolution came from the European Conservatives and Reformists group (ECR), with only 9.52 percent voting in favour, 17.46 against, and 73.02 abstentions; and The Europe of Nations and Freedom group (ENF), with 21.88 percent opposed, and 78.13 abstentions.

Dividing the vote by nationality shows that the majority of those who voted against the resolution or abstained are to be found among the MEPs of the UK, Poland, Hungary, Slovakia, and to a lesser extent, Greece. This would seem to illustrate how within the parliament there is a “centre”, more cohesive in terms of ideology, and a “periphery” which accuses the centre of wanting to erode national sovereignty and impose a hierarchy of values not shared by all. 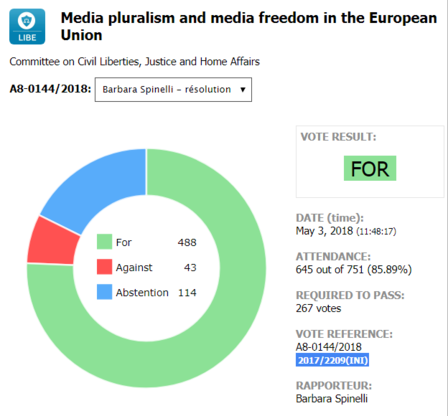 The final text of the Resolution was approved with favourable comments on the importance and urgency of the issues raised. However, as often happens after the initial stages, the text is somewhat weaker than that intended by the rapporteur, Barbara Spinelli.

This was clearly signalled during the debate by the Spanish MEP Estefanía Torrez Martines, from the European United Left – Nordic Green Left (GUE-NGL), and echoed by the Portuguese MEP João Ferreira, who abstained from the vote, claiming that it does not adequately address the problem of the concentration of media ownership . From the same group, but this time from Ireland, MEP Matt Carthy brought attention to the problematic balance between freedom of expression and the battle against “fake news”, highlighting the risk of excessive surveillance and authoritarianism. As a precaution against these risks he called for institutional guarantees such as monitoring of the judiciary.

In the Socialists and Democrats group, Cypriot Demetris Papadakis remarked on the identity of the European Union as a “community of values”, with the human being at the centre. Papadakis also commented that “the digital society has transformed the citizen from the consumer to the creator of news, and this has given rise to a new form of participative democracy; such democratic dialogue should be protected, and I therefore welcome the resolution”.

In the same parliamentary group, Slovak Monika Benova and Italian Nicola Caputo underlined the roles of journalists and the media as crucial actors for pluralism and freedom in society, while their Romanian colleagues Doru-Claudian Frunzulica and Maria Grapini recalled the balance between freedom of expression and the responsibility of those who produce information. Speaking in favour of the provisions for active protection of journalists and whistleblowers were the French MEP Edouard Martin, and Romanian MEP Maria Gabriela Zoana, who deemed correct the allocation of EU resources to such causes.

The liberals of the ALDE group voted almost unanimously in favour of the resolution. The French MEP Jean Arthuis underlined the various forms of violence experienced by journalists, an indication of the increasing erosion of their rights. Catalan MEP Ramon Tremosa i Bacells pointed the finger at certain member states and private subjects, accusing them of being attackers against media freedom and pluralism, and arguing that such attacks are also threats to large communities within those states, such as Catalans in Spain, or migrants in Poland.

Within the European People’s Party there was positive cohesion regarding the logic behind and the resolution’s proposals; taking a different tack, however, was Hungarian Andrea Bocskor, who abstained from the vote and denounced the political targeting of Hungary and Poland specifically, in the proposals of the text.

More negative opinions came from the Conservatives and Reformists group. The Slovakian Richard Sulik, for example, abstained, arguing that it is necessary to keep this topic the business of member states, while also arguing that the state should not interfere with the question of media ownership. Another critical note came from the Croat Ruža Tomašić, who argued that the EU shows scant regard for nationally specific struggles with challenges such as media freedom, and thus chose to abstain from the vote.

Still more critical were the comments from members of Nations and Freedom, who either voted no or abstained. The dominant viewpoint deemed the resolution a measure of political opposition against particular European parties. This was argued, for example, by the French MEPs Marie-Christine Arnautu and Bernard Monot, who abstained, and also raised the argument that journalists are often also political actors.

Within the Europe of Freedom and Direct Democracy group, there was a relatively large amount of opposition to the resolution: 48 percent of their members voted against it. Among these, the British MEP Jonathan Arnott, while claiming to be in favour of media freedom, expressed his lack of confidence in the ability of the EU to protect it, claiming that in such matters the EU should not interfere with national sovereignty. From the same group, but in favour of the resolution, were the Italians Ignazio Corrao and Laura Ferrara, who placed particular emphasis on the importance of guaranteeing such things as internet access, privacy, net neutrality, and editorial independence.