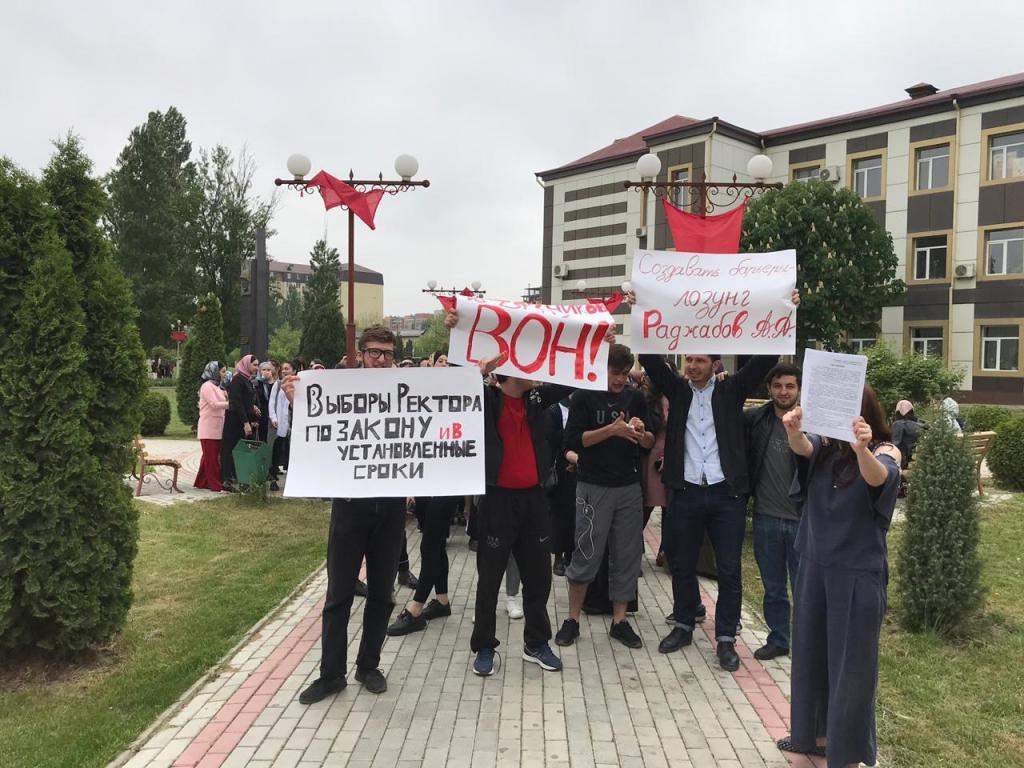 Professors dismissed without warning, bribes paid to see the contracts reconfirmed... The State University of Dagestan is certainly not in good health. But now, with great courage, some students are trying to make a change

Asiyat Gereyeva, a student of the Faculty of History at DSPU told OC Media that the protest began on 6 May after students saw a university guard, under the direction of acting rector Aslan Radzhabov, forcibly removing deputy dean and professor of civil law Zakir Mirzayev from the university building.

Later that day, dozens of students began protesting with placards in the courtyard of the university, which is located in the Daghestani capital Makhachkala. According to Gereyeva, all 172 students of the history faculty are taking part.

She said the reason Mirzayev was fired was not known, and that the university had simply not extended his contract. She said an opening for his position had not been announced.

‘Since then, no one has conducted the Civil Law class for us. The acting rector and head of the Department of Legal Disciplines, Aslan Radzhabov, has not sent a teacher to our class and he hasn’t explained why. Moreover, he refuses to meet with us’, Gereyeva said.

Ruslan Magomedov, another student at the university, told OC Media that 11 other faculty members from various departments whose contracts expired in May were also dismissed. After the protests began, the university administration extended their contracts until 11 July and announced contests for the positions.

‘We are not sure that contests will be held objectively and transparently. We have been attending classes since 13 May, but only out of respect for the dean of the faculty of history, who asked us to do so. But we continue to protest during breaks’, Magomedov said.

According to him, students from other faculties have approached the protestors and expressed solidarity but were afraid to publicly join them saying they were afraid of the possible repercussions.

According to Gereyeva, the entire student body of the history faculty gathered at the rector’s office on 17 May, where a meeting of the Academic Council, with the participation of rector Aslan Radzhabov, was due to take place. She said that the students had questions for Radzhabov in connection with the dismissal of their teachers and the delays in receiving scholarships, but that he did not appear.

Gereyeva also noted that the social scholarship they were supposed to receive three months ago had only been paid to them a few days ago.

On 17 May, the students announced they were refusing to obey Radzhabov until the elections were held for a new rector.

Rector without academic status and with a criminal record

Radzhab Radzhabov, the head of the university’s educational standards department, told OC Media that the acting rector ordered he be suspended from work after he wrote complaints against him to Russia’s Education Ministry and the Prosecutor’s Office.

‘Aslan Radzhabov was initially hired illegally, in September 2018. There is a court ruling against him from 1999 regarding the illegal acquisition and carrying of weapons’ he said. ‘According to the labour law, this is the reason he should not be allowed to engage in pedagogical activity’, he added.

On 17 May, the Prosecutor’s Office of Daghestan responded to his complaint with an appeal to the courts to terminate Aslan Radzhab’s employment contracts.

On 7 May, Federal Security Service (FSB) agents raided the university offices seizing documents in order to investigate allegations of embezzlement at the university. An FSB spokesperson told OC Media they were in the process of interviewing witnesses.

Radzhab Radzhabov told OC Media that Aslan Radzhabov was scheduled to be acting rector from the end of April until 1 June, while another acting rector, Marina Magomedova, was on holiday.

He said that Aslan Radzhabov holds numerous positions in the university, including as an associate professor in the department of life safety, a position he holds despite having no academic qualifications.

He also provided OC Media with a list of salaried university employees — along with official employment orders for them from the university — who he said were employed only on paper and did not attend classes.

She said that readmitting students who were expelled or allowing them to transfer had been ‘commercialised’ by the management.

She added that the summer elections for a new rector were being disrupted ‘in order for the leadership in this team to hit the bank accounts of incoming students’.

the head of the university’s educational standards department Radzhab Radzhabov said that the election of a new rector should take place in the summer, but that so far no meetings of the Academic Council had been held to create the required election commission.

He said the election of a new rector was originally scheduled to be held in 2014 but that it had been repeatedly postponed. In 2015, a criminal case was filed against the former rector of the university, Magomed Abdulayev, for fraud regarding student scholarships.

A spokesperson for acting rector Aslan Radzhabov told OC Media they were not qualified to answer questions about the protests or the dismissal of teachers. The spokesperson said that the telephone in the rector’s office was not working.

Radzhabov was not present at the university to answer questions about the allegations against him.