The Georgian television that speaks Russian 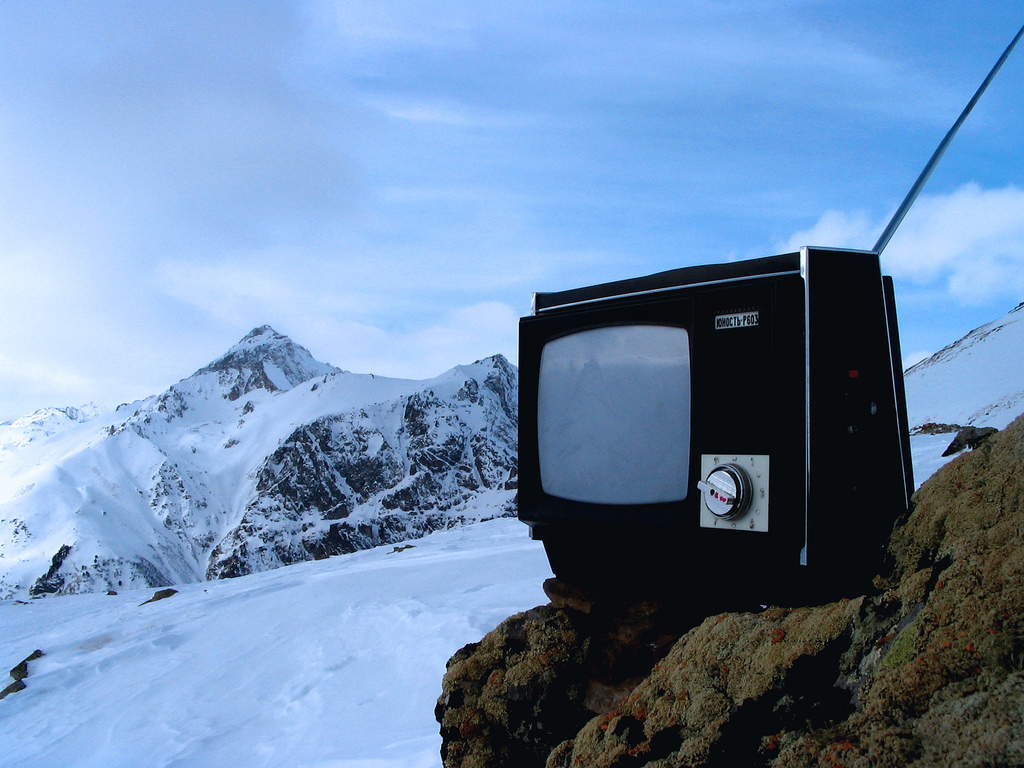 A TV set in the Caucasus mountains (goldenknabe/flickr )

“Pervyj Kavkazskij” (First Caucasus). It is the name of the satellite channel in Russian, financed by the Georgian government and dedicated to all the people of the Caucasus, but not only. Transmission problems, lack of qualified reporters and the opposition of “Gazprom Media” do not seem to be enough to make Tbilisi back down

According to a recent announcement, the programs on the Russian-speaking Georgian channel, “Pervij kavkazskij” (PK, literally “First Caucasian”) discontinued in May will resume with full effect in the next few months. The objective of the channel has not changed: to report information on what happens in Georgia and the Caucasus, not only for those living in the region but also for all those countries with Russian speakers.

The conviction that a Russian-speaking channel addressing the audience abroad was necessary, definitely took shape after the Russian-Georgian conflict of 2008. Tbilisi had not had any particular trouble with the Western public opinion: the major international media, as a matter of fact, also reported the Georgian point of view which, one way or another, had reached both the European and the American audiences.

Things had been very different in the Post-Soviet space, dominated by Russian channels with the exception of the Baltic countries. The Russian-speaking regions are very important for Georgia, be it Ukraine and Belarus, Central Asia or the Southern Caucasus, in Baku and Yerevan, the channels telling what was happening in Georgia were the Russian NTV and ORT.

The initial idea was to simply extend the signal and move to satellite TV the already existing Russian language channel “Alanija” (currently “Region TV”). Instead, on instructions of the national broadcaster, it was later decided to create a new network which would become the third channel (after the two Georgian ones) of the public television company.

Undoubtedly , the objective of this operation was a soft, but not less transparent, way of doing “counter-propaganda” (notwithstanding the fact that the Management of the channel took a clear stand against the term “propaganda”). This was shown also by the facts that programs were hosted by opponents to the Russian power, such as the reporter Oleg Panfilov and Alla Dudaeva, wife of the former Chechen President.

Actually, their programs were of a humanitarian-cultural character and utterly apolitical. However, their being on screen aroused irritation in the Duma deputies. The explanations from the Georgian side had no effect: in fact, the idea that PK is an anti-Russian channel, entirely dedicated to sabotaging inter-ethnic and religious peace in the Northern Caucasus, grew stronger in Russia.

After the start of PK on January 4th, on the 15th the trial programs on the French satellite operator Eutelsat had started also. The trial did not last long, however: at the end of January the Management of Eutelsat decided to shut down PK which, as the French guarantee, had not yet signed the agreement for permanent programs. Formal motivations aside, though, it was without a shadow of doubt the pressure from the Russian holding, Gazprom Media, to convince Euteslat to shut PK down in favor of a much more convenient contract.

For the Georgian network, transmitting the signal on Euteslat had a fundamental meaning, since the Russian channels broadcast on the same satellite. Russian-speaking viewers would have found the PK signal very easily and without having to tune the antenna. The rates offered by Euteslat, moreover, were cheaper than those offered by other satellite operators.

The court case between the Georgian broadcaster and Eutelsat ended on July 12th in Paris, with the victory of the French company. As a result, the Georgian network is now looking for a new satellite which in any case will be more expensive for the same technical conditions.

Furthermore, PK has been experiencing serious organizational and programming problems: after an initial success, programs have become less and less convincing. This is especially because the tradition of journalism in Russian has basically disappeared in Georgia, and the Management suffers from a serious lack of qualified people. In conclusion, in May it was decided to disconnect programs until the installation of a new management. Formally, the network is still working with a small group that performs web information services, but at the moment without a real audience.

The network is currently undergoing a technical and organizational problem-solving phase. The Management is now in the hands of the private company K1, founded by the present General Director, British reporter Robert Parsons. Amongst the Managers, there are another two English people and a Georgian emigrant with British citizenship who worked for BBC for 18 years.

It would seem like the British Management chose the private company so to attain maximum independence from the public television company: indeed, the British did not really appreciate the Georgian TV Managers’ ancient habit of meddling with the editorial activity. To date, PK is officially still part of the public television establishment which de facto, however, has no say.

Up until now, the Georgian government has allocated approximately 4 million Dollars for the channel. Preparation is due to start between August and September, but the actual programs, even on the new satellite, will probably be broadcast around the end of the year.

The main problem for the network is economic sustainability when the 4 million Dollars allocated are over. And sooner or later they will be. Already the opposition and the NGOs are protesting against these investments in a channel that, according to them, is not necessary. With a deficit amounting to 12% of the GDP, this is not an unreasonable objection.

The second problem is the lack of qualified Russian-speaking Managers. An English Management, however, will certainly not be enough to fill this lack. The expenditures for PK will only be justified if the channel enjoys popularity with the audience it is targeted to: the people living in Northern Caucasus, in the other regions of Russia, in the Countries of the Commonwealth of Independent States and the Russian-speaking population in Europe and in America.

These are issues that will surely arise later in time. What is clear, for now, is that the channel will broadcast as soon as a series of technical and administrative issues, such as headquarters, studios, equipment, and so on, are resolved