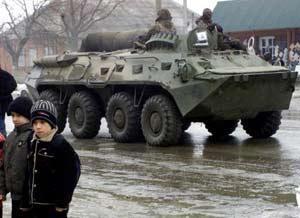 A recently published report from Russian-language news web site, Kavkazskij Uzel, or Caucasian Knot, has summarized in numbers and statistics last year's conflict in the North Caucasus. Review and commentary by Osservatorio Caucaso.

According to a report by Russian-language news web site Kavkazskij Uzel and contrary to the reassuring declarations by the political establishments in Ingushetia, Chechnya, and Dagestan, 2008 did not bring peace or stabilization to the north-eastern Caucasus. The statistics compiled by Kavkazskij Uzel indicate that at least 226 deaths of members of security forces killed in clashes with rebels or in assassinations and more than 420 were wounded.

According to official sources, there have been 65 deaths and 139 injuries of civilians as a result of assassinations, explosions, or anti-terrorist operations in 2008. The report further reads that 315 persons have been arrested on charges of participation in "illegal armed formations" (terminology used in official Russian documents), whereas 231 persons who, according to the security forces, who were part of groups of insurgents have been killed.

Including the guerrilla members who surrendered to authorities (officially more than 80 in Chechnya alone), the so-called "illegal armed formations" lost more than 500 members last year. In March 2008, the commander of the armed forces of the Russian Ministry of the Interior estimated the total number of active insurgents in the entire northern Caucasus to be around 400-500 persons.

In addition, 45 people were kidnapped in the region in 2008; a story chronicled by the 2008 documentary "Missing Lives: Disappearance and Impunity in Northern Caucasus," directed by Zaroma Mukusheva and produced in collaboration with the human rights group Memorial.

The year 2008 brought a significant rise in violence in Ingushetia, a republic of the Russian Federation with a population less than 500,000, located between North Ossetia and Chechnya. The number of casualties among the security forces went from 32 in 2007 to 70 in 2008 while the number of injured more than doubled from 80 in 2007 to 167 in 2008.

Following the murder of Magomed Evloev, Director of and journalist with the independent news site Ingushetia.ru, and the ensuing protests by the local population, the Kremlin had to react in response to the obvious powerlessness of former President of the Republic of Ingushetia, Murat Zyazikov. In October 2008, he was replaced by Yunus-bek Evkurov who was obviously more inclined toward dialog with the local communities.

The clashes between the security forces and the insurgents have created many victims in Dagestan too: at least 34 members of the police and the military and more than 50 persons suspected of actively supporting the guerrillas have been killed. What is of particular concern in this region is that while no more than a dozen people were arrested, 50 alleged rebels were killed.

Even though, last winter, Chechen President Ramzan Kadyrov declared to have definitely defeated the rebels leaving no more than a few dozen guerrilla fighters, there were also violent clashes in Chechnya in 2008.

According to Kavkazskij Uzel, 97 policemen and soldiers were killed compared to 115 persons suspected of taking part in the "illegal armed formations" killed during the anti-terrorist operations (according to data by the Chechen interior ministry, the number of killed insurgents stands at 61; 327 were arrested and 82 surrendered).

Although in North Ossetia the intensity of the conflict is significantly lower compared to the rest of the northern-eastern Caucasus, some of the major political officials in the region have been assassinated. The mayor of Vladikavkaz, capital of North Ossetia, was killed on 26 November 2008; his predecessor was killed on 31 December.

The Kavkazskij Uzel report uses the data and statistics available to discern certain trends in the current phase of the conflict between the security forces and militants from the rebel formations in the northern-eastern Caucasus.

The militias conduct attacks on soldiers and policemen in the region, often managing to avoid casualties on their side during the operations. The security forces react by conducting wide-sweep anti-terrorist operations. Current legislation allows authorities to select a certain area (which can be one house, quarter, or several communities) and to impose a special legal code which limits the freedom of movement of the residents and gives near free reign to the special forces.

Keeping in mind that such operations often lead to killing and not arrest of rebels and presumed terrorists, it is impossible to determine with certainty the number of civilian victims in this conflict whose end is nowhere in sight, and which, in 2008 brought the death of more than 500 people.