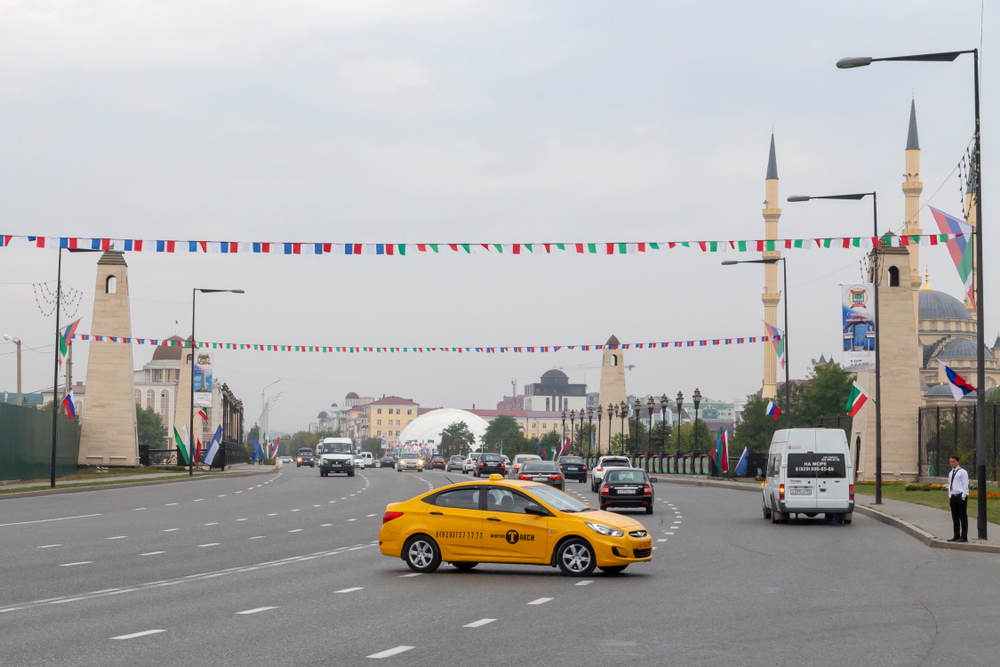 A taxi in Grozny, Chechnya (© Olga.Sh/Shutterstock)

Soon the Chechen women will be able to take taxis driven by women and only for women. An initiative sponsored by an Arab investment fund that caused very different reactions

Very soon, Chechen women will be able to use women-only, female-driver cabs. The initiative, sponsored by an Arab investment fund, has stirred heterogeneous reactions.

The news, announced just four days before International Women’s Day, has attracted more attention abroad than in Chechnya. The inhabitants of the republic were mostly unfazed, and the discussion on social networks never actually started.

“Yes, I've heard about it. Good initiative. We are on the right track”, stated a Chechen man, 43, before quickly changing subjects. This was no breaking news for many Chechens, who believe in the need for gender segregation in transport.

Women also favour the initiative. “It is all very logical. It is a step towards women, for their comfort and security…”, claimed an Instagram user commenting the news . A female student of a religious school in Grozny, interviewed by Caucasian Knot , also supports this business project. “Today, many women study Islam in religious schools and, according to Islam, a woman cannot be alone with a male stranger. I think this kind of taxi will be in demand among the female students of religious schools”.

“More competition…", commented a Grozny taxi driver. "As if it was necessary. Women are separated from men anyway. If a woman takes a shared taxi, no one sits near her”.

Some see the new service as having political implications. Since the beginning of the reign of Ramzan Kadyrov, Chechnya has been labelled as a somehow odd part of the Russian Federation. Journalists and analysts often repeat that the republic has become more independent than Dzhokhar Dudayev (the leader of independent Chechnya in 1991-1994) ever dreamt . International experts have even claimed that Chechnya is a state (or an Islamic state) within the Russian Federation and highlighted how Russia’s laws are not observed. In this politically charged situation, even an initiative like the female-taxi project contributes to the image of a republic which does not live in the legal framework of Russia.

Things might actually be more politically neutral. It is well known that religious identity is quite strong in Northern Caucasus and that many privilege Islam over secular law. Some might recall the suggestion of former president of Ingushetia Ruslan Aushev to legalise polygamy in the early 1990s. Like with the recent women-only taxi initiative, there was a debate on whether the proposal had a political connotation and how much it would deepen the normative cleavage between Ingushetia and the Russian Federation. At the time, the Russian political elite was concerned that Ingushetia would follow Chechnya's lead and start pursuing full political independence.

However, both then and now, these initiatives were not politically connotated. The initiative of the Ingush leader just meant to legalise the status quo. Like in many other Muslim-populated republics of the ex-Soviet Union, in Ingushetia there were cases of polygamy despite the prohibition by the Soviet law.

Most probably, the female-taxi project does not bear any political meaning either. One could say it is not necessary, as today's Chechnya no longer strives for formal political independence. The republic is doing its own mix of local traditions, Islam, and Russian laws. And Moscow seems fine with that.

Therefore, the project is just another step in Chechnya's progressive Islamisation, which always targets women first. In the late 1990s, Wahhabis tried to impose new regulations which would forbid the public appearance of women without headscarves. Kadyrov junior agreed with the idea of imposing a dress-code and started actively putting it in practice a decade later, in 2010-2011. How? Instead of controlling public transport and fining women without scarves, in Kadyrov’s Chechnya women without headscarves were “hunted down” and shot with paintball pellets by the security forces associated with the republic’s leader .

Chechnya's Islamisation has progressed rapidly. Today, Chechen women have lost almost all their rights, as shown by the jarring statistics on "honour killings" and domestic violence.