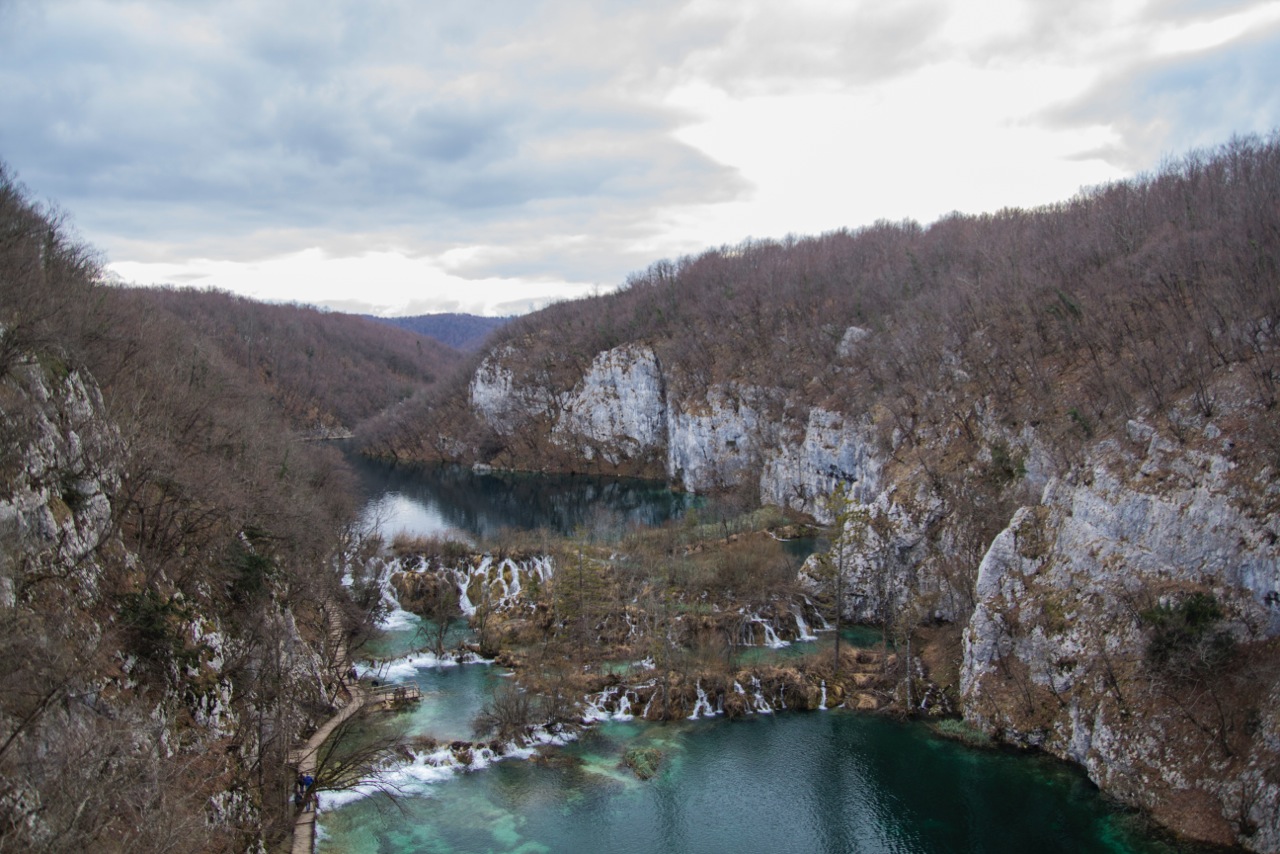 Tourism, traffic, pollution, and constructions. Plitvice, today, no longer rhymes with transparent waters and uncontaminated nature. And the lakes risk to be removed from the UNESCO heritage list

With a red umbrella in hand and the measured pace of those who know the route by heart, Helena Petrović goes up the path that overlooks the Plitvice lakes. Since 1979, when the park was inscribed on the World Heritage list, this distinguished lady leads visitors to discover one of Croatia's most precious jewels. "The park has not changed much in all these years", says Petrović, looking down on the sixteen lakes, partially asleep in winter. "What has really changed is all that revolves around it", she adds.

Tourism, traffic, pollution, and constructions. Plitvice, today, no longer rhymes with transparent water and uncontaminated nature. For this reason, UNESCO asked the Croatian government to send by Thursday, February 1st a list of urgent measures to be taken to better protect the area. Otherwise, the area will be moved to the list of endangered World Heritage sites.

Like MP Branimir Bunjac (Živi Zid), MEP Davor Škrlec – the only representative of the Croatian Greens in the European Parliament – denounced the territorial plan "which favoured partisan interests" and made new constructions possible in Plitvice. The plan was approved in Zagreb by Zoran Milanović's government in 2014, two years after the leader of the Croatian Ecological Party (ORaH), Mirela Holy, had left her post as Environment Minister. In the European Parliament, however, Davor Škrlec has never raised the problem of the Plitvice National Park.

The park, like over 30% of the Croatian territory, is part of the European network Natura 2000  on the basis of two directives: the so-called "Birds Directive", aimed at the protection of wild birds on the European territory, and the "Habitats Directive", which safeguards the biodiversity of natural habitats. In the past, failure to comply with the environmental protection obligations set out in the directives for sites included in the network has led to several rebukes by the European Commission to individual member states.

As we walk around the park, Helena Petrović explains the specificities of the ecosystem and the challenges it faces today. The continuous formation of travertine, the limestone rock that gives life to the famous Plitvice waterfalls, is only one of the exceptional elements that characterise this protected area of almost 30,000 hectares. In fact, the park is home to about twenty endemic plants, 350 species of butterflies, and 42 different types of dragonflies as well as bears, wild boars and deers... A very rich flora and fauna, but strained by the growing pressure of tourism. In fact, since 1979, the annual number of visitors has increased from 500,000 to 1.7 million in 2017, with daily peaks of 17,000 admissions last August – figures too high both for tourists to fully enjoy nature and for the vegetation and animals of the park – open all year round.

A Bed and Breakfast in the national park

However, the most serious threat to the Plitvice lakes is, paradoxically, less visible. "Behind the large waterfall is the village of Plitvica Selo, where most of the new houses were built", says Helena Petrović, pointing to the rise that features the highest waterfall in Croatia. "Until 1991, when we had to leave the park because of the war, not even a house had been built in this area. At the end of the conflict, shortly after 1995, I remember a person who built the first one (actually rebuilding an old ruin) and we were all shocked. Today, there are hundreds and hundreds of new houses around here, all of which built in the last five years", continues the guide, shaking her head. Private investors, both small and large, took advantage of the complicity of local authorities and of a new territorial plan approved in 2014 to intercept the immense flow of tourism that revolves around the lakes, while the administration of the park has no say in the matter.

The UNESCO mission, which visited the park in January 2017, raised concerns about this phenomenon. "Due to the growing demand for housing and business opportunities, there is a rapid growth in properties, with many old farms and other buildings being transformed and expanded into tourist facilities", reads the report approved last July by the World Heritage Committee. New buildings not only "dramatically change the landscape", but "increase drinking water needs", "increase the volume of waste water and car traffic", and "impose better infrastructure". The figures help to give a picture of the situation. "In the municipalities of Plitvica Selo and Plitvička Jezera alone, the number of private apartments rose from 16 in 2009 to over 300 in 2017, with a jump in overnight stays from 600 (2009) to over 30,000 (2017)", says Andjelko Novosel, former director of the National Park.

Responsible for the protection of the park from 2012 to 2016 and director from 2016 to 2017, Novosel talks about "strong pressure" by private investors. "They wanted me to open a third entrance to the park, closer to their properties, but I refused and hope that the new management would continue to do so", says the professor of geology and geography. "The owners of those establishments print their own maps of the park, independently guide the visitors inside, allow them to use bicycles... in short, they challenge the authority of the national park", continues Novosel, who assures he was replaced by the Plenković government because of his firm defense policy of the Plitvice lakes. Within the protected area, our guide Helena Petrović grudgingly admits that this "big problem" exists. "There is a lack of communication between the park and the private sector, and the latter should be more honest with tourists", explains Petrović. "They say 'you are 200 metres from the lakes', and it is true, but in fact the park's official entrance is 24 kilometers away on the other side!". 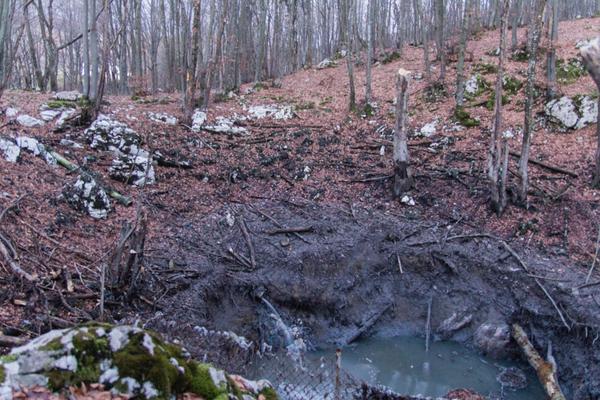 The situation described above appears even more alarming when one visits Plitvica Selo. Here, a group of veterans of the Croatian war of independence took the park's future to heart and organised a protest camp lasting over a hundred days, from June 21 to October 15, 2017. Ivica Jandrić guides us through the streets that branch right above the great waterfall and points to everything that is wrong. "These houses are disconnected from the public sewage system, they get the water they need directly from the lake basin and empty the waste water into the surrounding land", says Jandrić, who shows us what the locals have christened "the 17th lake", a foul-smelling pool in which an unidentified drainpipe is thrown. "I remember very well when there was drinking water at the bottom of the great waterfall. I have an old picture of me drinking it right here!", says the veteran. Today, the analyses show a different situation.

Detergents, pesticides, faecal waters: in the Plitvice lakes, and especially in the waterfalls into the Korana River, these substances are found in abnormal quantities, according to a study carried out at the end of July 2017 by the Croatian Institute of Public Health. In Zagreb, the results pushed Branimir Bunjac, MP of the "Živi zid" movement, to ask the government to stop constructions inside the park and to approve a new territorial plan, making them illegal. "The truth is that both social democrats (SDP) and conservatives (HDZ) use the Plitvice lakes as an ATM. Suffice it to say that the park invests 280 million kuna per year (38 million Euros, ed.), while the region of Lika and Segna in which it is located has an annual budget of just 180 million kuna (24 million Euros, ed.)!", accuses the independent MP. As a sign of proof, Bunjac recalls that "the current territorial plan was prepared by the Lika and Segna Region, governed by the HDZ, but voted in Parliament by the SDP government of Milanović".

Like Bunjac, the war veterans ask Prime Minister Plenković to change the construction rules, but they also demand that all houses irregularly built be demolished. And they warn: "We have already planned a forthcoming demonstration in Zagreb and, if necessary, we will block access to the Plitvice lakes".

Questioned by email on these issues, the Croatian Ministry of Environment and Energy said that it was confident about the future of the park and the decision of the UN agency. "We believe that UNESCO will recognise our efforts and the intense work undertaken in all sectors", assures the ministry, stressing some measures already taken to respond to the critical issues raised by the international delegation: creation of a working group, inspections at the construction sites, and definition of a programme at the local level to develop the water infrastructure necessary for new housing.

As for the possible abuses committed during the construction phase (for example, the veterans have filmed trucks and bulldozers crossing a wooden bridge only meant for cars), the ministry simply responds that "the park administration regularly checks the quality of water and neither the park nor the inspection bodies have noticed permanent damage to the environment, but only isolated cases", and that "the houses themselves do not impact on the outstanding universal value of the park, if water supply and sewerage work properly".

After the deadline of February 1st, the UNESCO World Heritage Committee and the International Union for the Conservation of Nature will decide whether to visit the Plitvice lakes again. After that, a decision will be announced by the Committee within six weeks before its next session, to be held at the end of June in Bahrain. Croatia may then request changes and present arguments. The final decision on the status of the park will finally be taken between June 24 and July 4 in Bahrain.