Water in the Balkans – too much, yet not enough 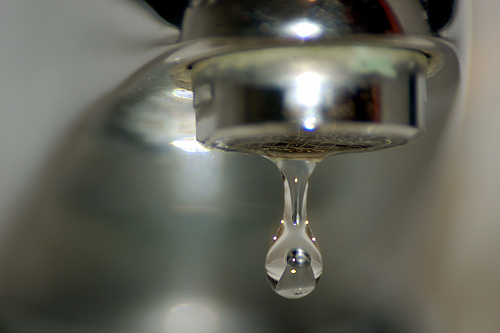 Despite the great availability of water – higher than the European average, the region finds itself unprepared for climate change, risking both droughts and floods

In a European context of more droughts and floods over the last decade that result in high costs and delayed development, the western Balkans have also suffered. Despite the region’s great wealth of natural resources, the European Environmental Agency (EEA) identified serious droughts as well as sudden floods. However, scarce state funding and rare regional coordination limit data collection, the basis for any prevention action. Furthermore, development and tourism result in increasing waste and pollution. As the economic crisis delays urgent investments, the region lacks protection from climate-change issues.

Indeed, the most serious floods involve eastern Europe. The major 175 floods of the last decade – causing death, displacement, and financial damage – include those on the Danube and Elba rivers in 2002, again the Danube in 2006, and the recent disasters in Albania and Istanbul in 2010. Here is a detailed regional overview.

2010, floods in Montenegro, Bosnia and Albania

2010, waves and controversies, after the emergency in Albania

2010, announced tragedy. The picture story by Cobianchi  from Scutari

Water is among the Albanian economy's major assets, crucial for electricity supply, agriculture, fishing, and tourism (250 lakes cover 4% of the territory) as well as industry and drinking water.

However, does the Albanian public care? Hydroelectric plants on the rivers Drina, Mati, and Bistrice produce 97% of Albania’s energy.Yet, surface and underground waters in c 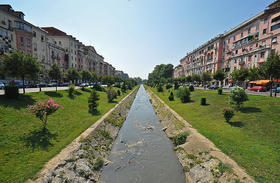 The canal with the small Lana river crossing Tirana (Predrag_Bubalo/Flickr)

ities and some agricultural areas are polluted. Sewers, industry, irrigation, cattle, and landfills cause the pollution, while the solution would be to increase waste incinerators. Several towns currently share sewers, but their poor maintenance and the conduits' limited size sometimes increase pollution risks. In addition, unprocessed industrial waste often flows into rivers. An important priority is stopping the degradation of soft water. As part of the European Union’s Stabilisation and Association Agreement, Tirana is upgrading legislation to comply with EU norms.

Albania's steep slopes cause great variance in the rivers' and creeks' yearly flow, which can increase ten-fold in wet years. Deforestation and other human activities cause soil erosion and floods, especially during the rainiest season between November and March. The greatest risk involves the western plains, where half of the population lives. Moreover, despite the great availability of water, the poor infrastructures cause intermittent supply, with leakage up to 50% in cities.

Water is also an important theme in interventions led by Friuli Venezia Giulia and Tuscany; these actions focus on small business and cross-border entrepreneurial cooperation related to the agricultural, wine, and wood sectors. Istria and Varaždin are jointly involved in the Action, led by Veneto, aimed at  promoting the region’s cultural, historical and environmental heritage,  while emphasising wine and typical products. Emilia Romagna supports strategic territorial and environmental planning related to water.

Water is abundant, and yet increasingly unsuitable for drinking. The deteriorating infrastructure results in an increase in contamination and sicknesses such as typhus and diarrhoea, according to the 2009 Unesco report “Living with drought in Europe”. After the war, the international community specifically designated over 200 million dollars for infrastructure repair, but funds are insufficient. According to the UN agency, "local authorities show inadequate capacities” in tax collection and management, based on water-quality statistics that are “arbitrary and inaccurate”. 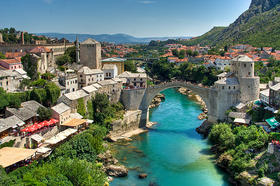 According to the EEA, 600,000 euros would be needed annually to monitor water quality in Bosnia. Aqueducts are currently seldom inspected. "The most used treatment – chlorine – has inconsistent results. Bacteria (E.coli, Streptococcus) often resist and chlorine exceeds allowed levels." The lack of a federal water and environment agency make water management difficult and also leaves the country lagging behind in ratifying over a dozen international protocols.

Rivers reflect the country's history. Before the war, Bosnia was the heart of Yugoslavia’s industry and most rivers were contaminated. The EEA report notes in Water resources in Europe' that "in 1991, when the country had 4.5 million inhabitants, waste in rivers equalled those of a population of 9.4 million." After the war, the economic crisis did not improve the situation. The permanent flood risk involves 4% of the country's territory and 60% of its plains.

Montenegro: between water and energy

Despite great water and energy resources, Montenegro still needs to do a great deal to protect and preserve its resources. Legislation is being adapted to the EU framework directive on water (WFD) and protection of springs, but the deadline was in 2010. 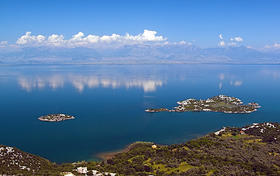 The latest available data in December 2010 indicated that in 2005 there was a loss of 48.2 million of the total 53.6 million cubic metres of distributed water. The European Agency for Reconstruction supports the improvement of sewage management and the installation of purifying systems. Given the weight of tourism in Montenegrin economy, the most visited areas must have working infrastructures that do not increase pollution. In 2006, in order to maximise water supply to the coastal areas with dramatic population increases in summers, the government started to build new drinking water networks from the Shkodër lake to the Adriatic; the work is still in progress.

In 2007, the last great drought left whole communities without water. The OSCE, KFOR and UNMIK addressed the emergency with workshops and campaigns on water saving, but with small results. 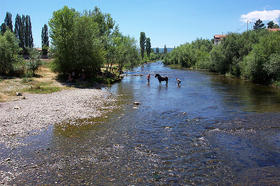 Swimming in the Ibar river, in Kosovo ( JerryGallucci / Flickr)

According to the OSCE, the situation remained “precarious” in the following years because of climate and poor infrastructures; poor management has increased risks for public health and violated a fundamental human right.

In the near future, water shortages may aggravate ethnic conflicts. Kosovo municipalities, that mostly seem to understate risks, depend on KFOR funding and international donors to improve infrastructures. EC studies also note poor payment for water and the lack of a central authority for water. Rain has been increasing in Kosovo over the last years, explains an EC report of May 2010, and "strong measures are needed to stop over-exploitation and waste."

The country has 26 lakes, 20 rivers (including Danube, Sava, and Drava) and cross-border waters (Borut, Neretva) and Karst (Mirna and Cetinja). The Zagreb area registers regular floods (5 deaths, 5,000 displaced, and damage for 25 million dollars in 1989) and the containment of the Sava required strong investments. Regular floods also afflict Karlovac (from the Kupa), Vukovar and Osijek, and Istria (damage for 30 million dollars in 1993). Flash floods have been registered in Rijeka, Split, Šibenik, and Dubrovnik. Drought characterises most of the thousand Croatian isles, especially in summer, while irrigation-related imbalance caused 60% of the dry years in Baranja and Slavonia over the last decade.

Over the last 20 years, human settlement has reduced the groundwater in the Zagreb region and the level of the Drava river decreased by four metres. Despite the still necessary improvements, the EBRD-World Bank report “Water resources management in SEE” noted that, "Croatia has one of the best national water monitoring systems in the Western Balkans" and maintains good quality of water.

Cross-border issues involve the management of the Drava river, influenced by hydro-electric plants in Slovenia, Hungary, and Austria, or the Slovenian nuclear plant in Krsko. Thus, the Croatian government takes part in multilateral committees for water protection, such as those for the Danube basin and Karst waters with Slovenia.

Macedonia: the most vulnerable to climate change

With an average altitude of 850 metres and 75% semi-arid territory, Macedonia has very diverse rain regimes. During the 1990s, severe droughts compromised economy and health, according to the EBRD-World Bank report “Water resources management in SEE”. During the dry season, 40% of water demand remained unmet and water tanker transports relieved the emergency. Only the western areas do not suffer from drought. 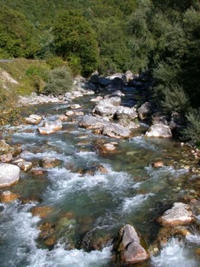 Because of mostly unprocessed urban and industrial waste, the water quality in the rivers' course deteriorates. Human over-exploitation lowered the level of lakes; for example, Lake Prespa decreased by 3.5 metres in 2001.

The country, situated in the temperate climate region, probably will seriously suffer from climate change, with new water and temperature records expected in the next years. The national strategy for agricultural development aims at doubling the irrigated surface (currently 20%) by 2020, but this will require an overall redistribution of water. The country's evapo-transpiration exceeds precipitation: 660 mm against 190 mm. In addition, most of the territory is exposed to high erosion levels, so the irrigation plan will need to include reforestation measures for current agricultural areas.

The regional geomorphology causes a quick discharge of waters into valleys, populated areas, and industrial settlements like Tetovo and Skopje, that registered a dozen severe floods over the last 150 years. According to the EEA, Macedonia is among those European countries (including Cyprus and Bulgaria) where water consumption is becoming unsustainable. 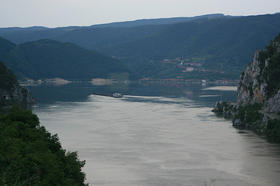 Of the available water sources in Serbia, 85% originate outside the country; the Danube is the core of the water system. Recent urbanisation has increased consumption and sewer-management issues, while drinking-water quality deteriorated due to poor pipes and purification systems (that use chlorine).

Serbia is not a rainy area. Despite protection of several wetlands, some ecosystems also disappeared after the construction of dams. Over the last decade, chemical and bacteriological standards of drinking water have improved in cities where authorities invest in infrastructures. Inadequate water networks characterise poor areas and peripheries, where Roma and displaced people concentrate.

According to the EBRD-World Bank report “Water resources management in SEE”, wide regions are at risk of floods – about 16,000 square kilometres, of which over 12,000 are in Vojvodina. Control systems for the main rivers are thus a high priority on the national agenda – if the economic crisis allows.