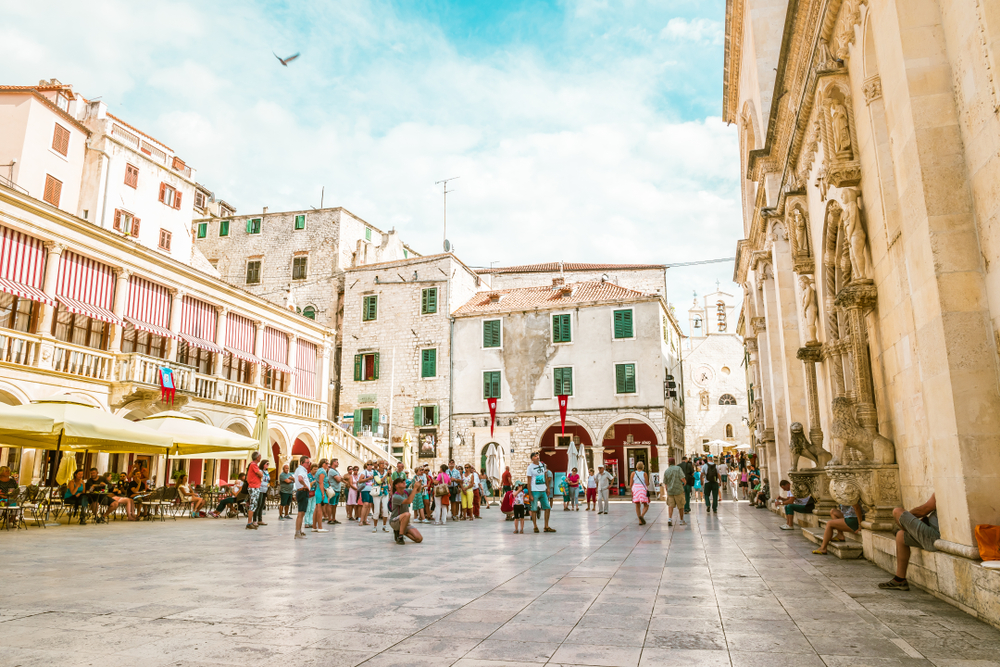 Always regarded as an important economic resource, today mass tourism risks creating serious imbalances in Croatia. To address them, someone started thinking to "Proceed with care"

How to live with a growing number of tourists? How to benefit from it without exasperating the local population? And how to manage visitor flows without destroying the environment? From May 2 to 5, fifty architects, urban planners, sociologists, and other scholars from ten countries gathered in Šibenik for Croatia's first scientific conference on the subject of mass tourism and its consequences.

Organised by Zagreb architectural firm Juračić Skorup, interpreting and cultural tourism management agency Muze, and the IMC communication agency, the conference "Living with tourism. Proceed with care" brought together representatives of various universities in the Mediterranean, including Zagreb's, Ljubljana's, Barcelona's, ​​Istanbul's, Jerusalem's, and the IUAV in Venice.

"The idea of ​​the conference was born in summer 2017, when we witnessed a wave of protests against tourists in Barcelona, ​​Venice, and Dubrovnik. The widespread anger of the inhabitants made us think that it is time to act and let the public authorities realise what is happening", explains Croatian architect Jelena Skorup, one of the organisers of the event.

The aim of the three days of debates and presentations was to discuss the most recent research projects carried out by scholars and doctoral students on various aspects of mass tourism (and with particular attention to the Mediterranean area), and transmit the results to the local authorities, some of which also sponsored the event (the Ministry of Tourism, the city of Šibenik, the office of the Head of State and the Croatian Commission at UNESCO).

"We want to sound an alarm bell", sums up Jelena Skorup, who with "Proceed with care" wanted "to invite public authorities to better manage the opportunities and risks of tourism". 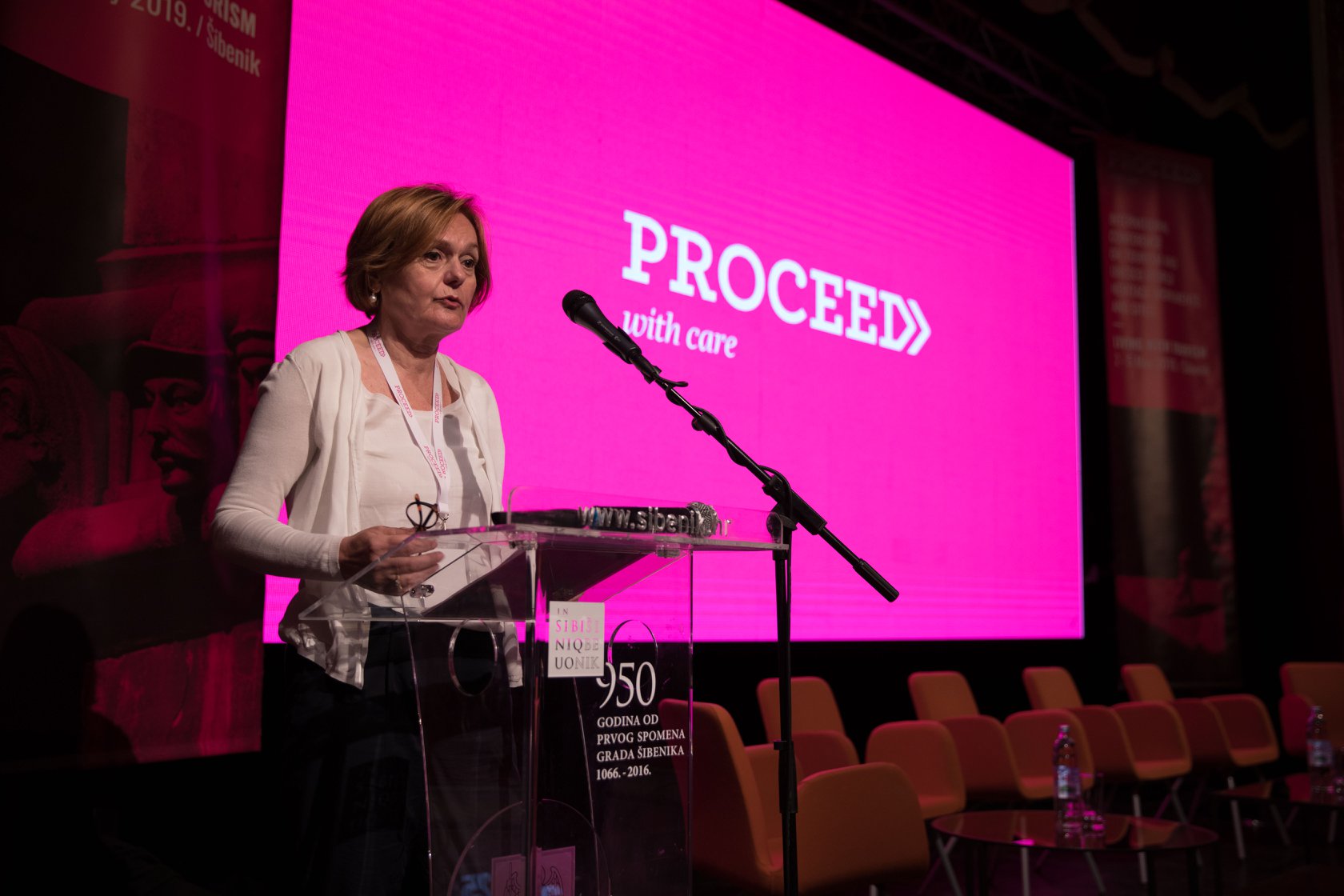 During the conference in Sibenik (photo © Proceed with care)

In Croatia, and particularly in Dalmatia, the risks associated with mass tourism are well known. This country of just 4 million inhabitants received nearly 20 million visitors in 2018, most of whom (around three quarters) chose the coast (Istria and Dalmatia) and did so mostly during the summer season. The imbalance is apparent, almost as much as the wealth generated by tourism – yet, in official speeches, "caution" is often absent, overwhelmed by enthusiastic tones.

In Šibenik, the authorities intervened to kick off the conference. Mayor Željko Burić and State Secretary of Tourism Tonči Glavina took part in the opening ceremony, but both gave a speech celebrating the "successes" registered so far in Croatia. In a nutshell: the number of overnight stays and visitors increases year after year, as does the total income the country derives from this sector.

This positive trend has continued uninterruptedly since the war ended in Croatia (1995), and has been more recently favoured by the country's entry into the European Union and by the political instability that broke out in other competing locations in the Mediterranean (North Africa in the first place). An undeniable asset for Croatia, therefore, but one that authorities often prefer not to analyse in detail.

"The Croatian authorities are covering their eyes, they don't see the extent of the problem", comments Jelena Skorup. What do they not see? During the three days of debates, several critical issues were highlighted. First of all, the most obvious matters. The Dalmatian coast shares the same problems that already affect Venice, Barcelona, and other tourist destinations.

The increase in rents, also because of the spread of Airbnb, and the multiplication of activities for tourism purposes to the detriment of others are causing the progressive "emptying" of old town centres, which lose their local population. In Croatia, Dubrovnik's stari grad is the best known example, but the same phenomenon affects Trogir and Split. In some cases, UNESCO has already warned the government and municipalities that too many tourists are putting at risk the very protection of the world heritage area.

The "apartment-isation" has even more insidious consequences on the economy of cities and regions that are entirely converted to tourism. For example, professor Anica Čuka from the University of Zara noted that on the five Croatian islands connected to the mainland by a bridge (Veglia, Puntadura, Pago, Bua, Morter), that host half of the visitors of Croatian islands, "while the population continues to slowly shrink, tourist apartments are experiencing a boom".

On a national level, it is estimated that one fifth or even a quarter of Croatian gross domestic product depends directly on tourism (depending on whether the data of the competent ministry or those of the World Travel and Tourism Council are considered) – the highest ratio in Europe. The sector is therefore a source of considerable wealth, but also a factor of major imbalances, and the "overtourism" affecting some areas is matched by "undertourism" in inland areas, forgotten by public authorities.

Solving this issue is inevitable not only in order to relieve the coast from excessive pressure, but also to drive development in areas currently affected by poverty and emigration. But how to proceed? Positive examples include Ljubljana, which saw visitors rise from 450,000 in 2014 to 840,000 in 2017, but has been able to remain a liveable city for its citizens. "Green spaces cover 70% of the urban area, while pedestrian areas and the public transport network have been considerably expanded in recent years", explains professor Alma Zavodnik Lamovšek of the University of Ljubljana.

Šibenik itself has successfully used tourism to succeed in its transformation from an industrial city to a post-industrial one. "From 2013 to 2018, while the number of tourists increased by 29%, unemployment fell by 47% and the number of small businesses rose by 16%", says professor Ante Golem of the University of Zara. The city's defensive military structures have been restructured (like the panoramic St. Michael Fort, today an open-air theatre) or are being renewed, and the municipality has created a public body in charge of cultural programming in the new spaces: the Fortress of Culture (Tvrđava Kulture).

In general, the experts gathered in Šibenik highlighted that planning is the basis for coherent, balanced development and successful cohabitation with tourism. "You can't just think about the next summer season, you need to look further", explains Jelena Skorup. Planning must be accompanied by the awareness that tourist flows can heavily (and quickly) transform the urban fabric. Hence, it is necessary to support the local population present in tourist resorts and the survival of activities not exclusively intended for tourists. At the same time, visitor flows should also be directed towards those areas that are currently unknown to most, in order to redistribute the wealth brought by tourists. Finally, developing cultural tourism, or tourism that is more respectful of the environment and local populations, makes it possible to ease the pressure on those areas and populations that coexist with tourism.