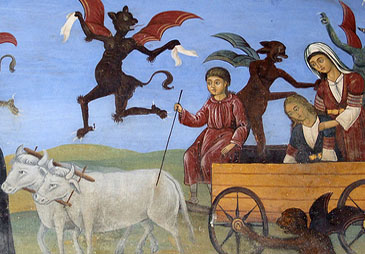 Fresco in the Rila monastery

"The 'new Bulgarian demons' are nothing else but the old ones dressed in new clothes; a mix of the nomenclature and the secret services of the regime." An interview with German journalist Jürgen Roth, author of a book on organised crime in Bulgaria, which stirred debate in Sofia and beyond

The German investigative journalist Jürgen Roth, an expert on organised crime, arrived in Sofia on November 11 to present the Bulgarian edition of his latest book, The New Bulgarian Demons, dedicated to the close links between politics and organised crime in the Balkan country, which has recently entered the EU. Roth's book incited great interest and heated debate in Bulgaria: almost no politician or member of the elite is exempt from criticism, starting from the current partners in power such as the Socialist Party and the Movement for Freedom and Rights (political representative of the Turkish minority) to the "new hope" Boyko Borisov, current mayor of Sofia and the likely next prime minister. The former socialist Interior Minister Rumen Petkov, a central figure in The New Bulgarian Demons, resigned last April because of connections with persons linked to organised crime. He repeatedly threatened to press charges against the German journalist. In an interview for the daily newspaper 24 Hours titled "To Hit the Slanderer", published on the day of Roth's arrival in Sofia, Petkov described Roth as a "liar, slanderer, a spineless swindler", adding that "his mouth, hands, and all other body parts would be battered". His statements were heavily criticized by Reporters Without Borders .

Why did you decide to write a book on the situation in Bulgaria? 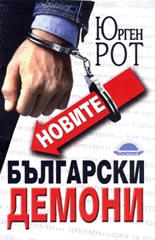 The question is why not? I have already written about Ukraine, the mafia in Italy, and other countries. We are all Europeans and it is important to understand what happens in the member states. I have dedicated a substantial part of my work to the study of organised crime, especially in cases when the latter manages to infiltrate institutions, and a part of this work concerns Bulgaria, a country where this phenomenon has been known ever since the 1980s. At the same time, many signals indicate a worsening of the situation in the country; thus, I decided to do a book on the close links between corruption, organised crime, and the political and economic class in Bulgaria.

What are the most important conclusions you reached during your work on the book? Who are "the new Bulgarian demons?"

In reality "the new Bulgarian demons" are no one else but the old ones dressed in new clothes. The old nomenclature, connected to the old security services of the regime, were and continue to be particularly strong in Bulgaria. Parts of these structures also have links to conventional crime, but above all with economic crime, crime at high levels, and to put it this way, with a relevant part of the political elite.

What were the major difficulties in the process of collecting information for the book?

Because of serious irregularities and the poor progress in the fight against corruption and organised crime, the European Commission, in what is an unprecedented move, refused to renew on November 25 the accreditation of two government agencies in charge of the PHARE program. The accreditations were revoked in July. As a result, 220 million euros from the pre-accession funding, aimed at modernisation of institutions, are definitely lost for Sofia, whereas another 300 million remain blocked. Brussels's decision, described as "disappointing" by Bulgarian Prime Minister Sergey Stanishev, is very significant, and it underscores Brussels's declined faith in the readiness of Bulgarian institutions to fight corruption and organised crime. Disappointment was huge in Sofia, which expected a financial shot to confront the first signs of the economic crisis in the country. The Bulgarian government, which was subject to vocal calls by the opposition to step down, talked of "double standards", emphasizing its "strong efforts" and "specific results" in the fight against crime. Enlargement Commissioner Olli Rehn, although saying he was "sorry" about the Commission's decision, said, "Many of the measures cited by Sofia are only promises without specific results." f.m.

The major problem was that in Bulgaria you are dealing with highly professional economic-criminal class, such as the group TIM. Nobody wants to talk, given that, among other reasons, they also enjoy protection by various institutions. What makes research even more difficult is the high level of manipulation, also of documents, which makes it extremely difficult to collect evidence to support the findings. I had access to different documents that looked absolutely original, but which at a closer look turned to be very sophisticated forgeries. In addition, I should say that doing investigative journalism here means "becoming part of the game", and one often risks being manipulated by different stakeholders, who are often very unreliable sources.

You have often talked of the fear to talk about crime here in Bulgaria...

This is more then just an impression. I know very well the reality of Calabria and Sicily, and here I have encountered the same fear and insecurity. Many fear for their families, or from being beaten or even killed. I got the impression of a very heavy atmosphere.

Your book has caused reactions, even violent ones, by politicians who felt directly concerned by your work. What type of reactions did you get from your Bulgarian journalist colleagues?

There have been different reactions. From what I managed to read and what I was told by my contacts, the daily press and the serious magazines have reacted very positive. Then, some journalists, linked to interests concerned by my book, have, as expected, expressed a very negative criticism.

Your critics have accused you of having reported facts incorrectly, but above all of not being able to prove your accusations? What is your response to this?

What does it mean to prove? Investigative journalism can collect documents, but also statements and testimonies. If some source expresses the wish to remain anonymous, and I think that such a request is reasonable, I report what I have discovered without revealing the source. If I collect a repeated and coherent rumour on something, I report it. I am neither a prosecutor nor a policeman; my trade is to try to get closer to the truth, and this can be done also without actually having factual evidence and documents. In addition, as I was saying earlier, such documents in Bulgaria can lead you off the road.

Is there anything bright in the gloomy panorama you have painted in your book?

I would say no. I read the reports of the Western embassies in Sofia. They all agree that the links between crime and politics in Bulgaria are getting worse.

You have looked into the links between crime and politics in many European countries, for many years. Is there anything that makes the Bulgarian situation a special case?

Bulgaria is, for many reasons, very similar to what happened in Russia, primarily as regards the close links between the old secret services and the organised crime that emerged during transition. The situation becomes especially delicate, in connection with what I said earlier: On one hand, the civil society is very weak and incapable of fighting the economic-criminal networks; on the other hand, Bulgarian political parties do not represent society as a whole but instead they represent exclusively the economic interests of their supporters.

Considering this, do you think Bulgaria admission as an EU member is positive, or do you feel the country should have waited?

Without the EU, the situation in Bulgaria would never change. The EU membership is the only real possibility for civil society to raise its head. Only the strengthening of the Bulgarian civil society can break the vicious circle created in the country. Some signs indicate that this process has began with many little NGOs, the birth of the environmentalist movement, but also in the field of information, especially with respect to online media. Nevertheless, these small and isolated groups must still be supported from abroad, because they have no influence either in the parties or the institutions.