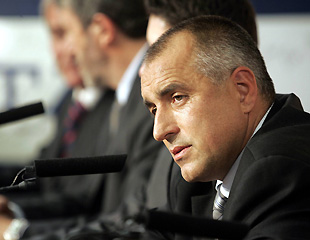 Boyko Borisov, leader of the rightwing and winner of the recent national elections will be the next Bulgarian prime minister. But where does he come from and who is Borisov, known by everybody as "Brother Boyko"? The story of his rise to political power

"We at GERB work so that our leader Boyko Borisov gets the post of prime minister as a gift for his 50th birthday." In early June amidst the election campaign, these words by Tzvetan Tzvetanov, one of Borisov's closest associates (and probably the new interior minister), proved an accurate prophecy.

On the evening of 5 July, with the polling stations closed, and with the certainty of having secured a victory beyond the boldest predictions, Boyko Borisov arrived at the press centre at the National Palace of Culture in the centre of Sofia, with the confident smile of someone who has just completed his mission.

"With this result, I cannot exempt myself from the responsibility to lead the new government," said a visibly satisfied Borisov to the reporters eager to get his first statement as incoming prime minister, while a group of supporters waved flags and chanted, "Victory!"

In a room crowded with supporters competing to get close to Borisov and to applaud his remarks, Borisov dedicated the victory to his grandfather "killed as a dog by the communists in 1944," and sent a succinct message to the people and the media. In sum, he said, "I promised you a victory, and here it is. We will fight corruption and crime; we will re-establish good relations with the EU, and we will confront the economic crisis. Now, let me work."

This was the conclusion of the long and relentless stride to power of the "General", one of Borisov's better known nicknames together with "Bate Boyko" ("Brother Boyko"). It was a march to the sound of the slogan, "I am the only solution for crime and corruption," that has now taken the form of apparently inevitable destiny.

It all started in 2001, at the time of the "miracle of Simeon Sakskoburggotski". The ex-king returned to Bulgaria and in a messianic spirit promised the Bulgarian people prosperity and restitution of the normalcy disrupted by the most difficult and depressing years of transition. Amidst widespread awe, he won the election by a landslide.

In need of loyal associates, Simeon named as chief of police the man responsible for his personal security, and who had previously been in charge of the security of Todor Zhivkov, the longest-ruling communist dictator in Eastern Europe. Simeon chose Boyko Borisov - owner of a security agency "Ipon - 1", former firefighter, police officer and active karateist.

Borisov's years as a "security specialist", starting with 1991, are subject of rumours and suspicions, which have never been fully disproven. In those chaotic years, "security agencies" often functioned as a front for organized crime, and engaged in racket and extortion from the emerging private sector. An article in the influential US magazine "Congressional Quarterly" in 2007, openly accused Borisov of "close connections with known criminals" including the boss Rumen Nikolov alias "the Pasha". The "General" always categorically denied such allegations.

In his years as chief of police, Borisov quickly became one of the best-known public personalities in Bulgaria. Struggles between different criminal groups produced dozens of murders on Bulgarian streets in those years. With his massive, menacing demeanour, usually in a black-leather jacket, Borisov would promptly arrive at the crime scene and, before the cameras, promise investigation and punishment for the criminals.

The poor results did not seem to damage Borisov's ratings. On the contrary, as he would explain, the criminals remained at large, because "we (the police) are arresting them, but they (the corrupt judges) are letting them go". Many were inclined to trust "Bro Boyko". Rough and perhaps with a "wise-guy" attitude, but the only one able to force gangsters and the corrupt against the wall.

With his popularity on the rise, Borisov signalled that he wanted to distance himself from Simeon, whose ratings were rapidly declining because of unfulfilled promises and his government's involvement in scandals. Although elected to parliament from the list of NDSV (the movement of the former king), Borisov declined the mandate in order to continue his work as chief of police.

Rumours spread that Borisov would emerge as a leader of as new political party. The opportunity presented itself with the elections for mayor of Sofia in November 2005. With the slogan "Complete Change", Borisov wiped out competitors from the mainstream parties. The "General's" mandate as incumbent of the powerful post - almost a third of Bulgaria's population lives in Sofia - would again be confirmed with an uncontested victory in 2007.

The next step was the creation of GERB (Citizen's for Bulgaria's European Development) in December of 2006, a few days before the country's entry into the EU. After a period of ideological indecisiveness, Borisov decided to position his party on the right of the political centre, to challenge directly the major party in power, the socialists of Prime Minister Sergey Stanishev.

Before the national elections, GERB marked victories in several local elections and in two voting rounds for the European Parliament, in 2007 and in June 2009. These victories were an overture to the triumphant victory of 5 July, when the party secured 116 out of 240 seats in the national parliament.

Calculations are underway concerning the composition of the government coalition - the different possibilities include a single-party minority government or a two-party coalition with the rightwing "Blue Coalition" or a larger coalition to also include the movement "Order, Legality, and Justice". Political analysts and the media still struggle for the formula that can explain the distinct identity of Borisov and his party, and its election charisma.

The phenomenon of "Boyko" has some things in common with the phenomenon of "Simeon", which is, according to many, the role model for Borisov's party: charismatic leader, relationships involving personal rather than political loyalty and a weak ideological platform.

Simeon's movement, the NSDV, "fell from the sky" together with its leader, and was comprised primarily by bureaucrats - the NSDV became a party only after the election victory. However, GERB had time to organise across the entire Bulgarian territory, where it controls power locally in many places, and hence it can prove to be a stronger and more stable political organization.

In addition, Borisov's charisma is profoundly different from the ethereal and aristocratic charm of Simeon. First known as a "Balkan macho", which according to the polls guarantees him the support of a large part of the female electorate, and subsequently a crimebuster. Borisov has recently also profiled himself as a "master of ceremony", always present at openings and red-ribbon occasions, constantly surrounded by microphones and cameras.

Seeking comparisons easily understood by their readers, Western media frequently compares Borisov to Batman, or other superheroes from comic books. Very few, however, manage to depict his essentially traditional features, in the way he is perceived in Bulgaria. In a society still connected, even if only in self-representative terms, to patriarchal values, Borisov incarnates the authoritarian but fair head of the family, the "big brother" responsible for maintaining social order and equitable distribution of resources; a reliable person, especially in a crisis.

With the strength of his rough charisma, the "General" brought into parliament a party essentially composed of unknowns. GERB is in many ways a political structure whose traits are still not very clear. However, one thing is certain: the movement is made in the image of its leader, given the large number of officers (both from the army and the police), mayors, vice-mayors and regional representatives whom Borisov will take to the "Narodno Sobranie" (Bulgaria's parliament).

The party's ideological and political identity remains rather vague. The sorrowful dedication to his grandfather does not make Borisov a dissident or an opponent of the previous regime. The GERB leader began his career in the structures of the communist state - he was a member of the party - and he has never explicitly distanced himself from that part of his past.

Considered by some analysts as representative of the country's medium-large businesses - Borisov's companion, Tzetelina Borislavova, leads one of Bulgaria's more influential banks, Sibank - GERB presented a rather generic anti-crisis program, that is, if some of its voters actually read it before casting the vote.

Awarded victory primarily for their anti-corruption rhetoric, GERB and its leader will now have to run a country that according to the IMF's most recent estimates will suffer an economic contraction of 7% this year.

Borisov has already invoked an alibi ahead of further developments provoked by the international crisis, whose outcomes are largely unforeseeable On the evening of his victory, he declared, "The previous government has left us a devastated budget. Give us at least one year to bring things in order." He added, "You cannot expect miracles in a few months time." Furthermore, he claimed, "Anyway, we did not promise any miracles."