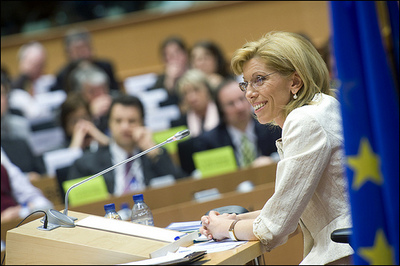 The debacle of Bulgarian European Commissioner Rumyana Zheleva was the first blow to Prime Minister Boyko Borisov's government. Although it is still too early to assess the consequences of Zheleva’s defeat at the national and international levels, the governing party's criteria for choosing its highest-ranking officials should be called into question

“Please accept my resignation from all the positions I currently hold so that I can withdraw my candidacy for the post of European Commissioner”. These are the initial words of the short letter of resignation sent by Zheleva to Bulgarian Prime Minister Boyko Borisov on 19 January. With those words, Rumyana Zheleva put an end to the political agony that had been plaguing her for a week.

On 12 January, Bulgaria’s Minister of Foreign Affairs (who had just been appointed deputy secretary general of EPP and was one of the nominees for the post of European Commissioner for International Cooperation and Humanitarian Aid) underwent the standard hearing required by the European Parliament in Strasbourg for all European Commission candidates.

Rumours about the difficulties that arose during Zheleva’s hearing circulated for several weeks. While, over the last few weeks, many suggested that Zheleva was not competent for the post, even more doubts were raised about the connections between Zheleva’s husband and the powerful Bulgarian economic lobby “TIM”. Although the allegations have never been proved, the lobby has long been suspected of illegal activities, especially of money-laundering. The German daily newspaper “Die Welt”, in an article published on 28 December 2009, described Zheleva as “a gangster’s wife in the European Commission”.

Zheleva was indeed the object of intense criticism, but in a different way than she had expected. European Members of Parliament asked Zheleva to explain her connections with the company “Global Consult” because the candidate was found to hold shares in the company even after she was elected to the European Parliament. She was subsequently accused of conflict of interest and perjury.

Zheleva was barely able to defend herself. She appeared to have trouble answering the MEP’s questions in English and started to speak first German and then Bulgarian, proving she was not able to cope with tension. Some of Zheleva's responses, such as the following, were immediately published in the Bulgarian and international media: “Today I am here because I have nothing to hide [...] If you want, you can come to my country, meet my husband, see my office, and visit the city where I live,” Zheleva told the embarrassed MEPs.

Immediately after the hearing, the candidature of the Bulgarian Minister of Foreign Affairs became “the Zheleva case”. The Socialist, Green, and Liberal constituencies started to insistently ask for her resignation, while members of the People’s Party at first fiercely defended their deputy secretary general, threatening to boycott any socialist or liberal candidate in the case of rejection of Zheleva’s candidature.

As days went by, the European Parliament and the President of the European Commission, José Manuel Barroso, seemed not to be able to decide who should check out the documents related to Zheleva’s business interests. The possibility that Zheleva’s case would have a happy ending became increasingly remote with each passing day. The inevitable conclusion was Zheleva’s withdrawal and the nomination of a new candidate, World Bank Vice-President Kristalina Georgieva. Georgieva's hearing is scheduled for 3 February.

Six months after the elections, the “Zheleva case” is the first actual blow to the government led by Boyko Borisov. Borisov is the absolute protagonist of Bulgaria’s political arena and this defeat hinders the Prime Minister’s European reputation. Borisov invested a lot of his political resources in Bulgaria’s relations with European institutions. Those relations had grown increasingly strained after Bulgaria’s accession into the EU.

A vital goal for today's Bulgaria is securing the release of EU funds allocated to Sofia. The economic and financial crisis has absorbed all state budget resources and public expenses have had to be drastically cut. Furthermore, the release of EU funds is equally vital for the future of Borisov’s government. After the events of the last few days, Barroso, who experienced serious problems related to Zheleva’s failure, might not have a very benevolent attitude toward the new EU member state.

Borisov did not conceal his ambitions for Bulgaria’s role in the Commission when Zheleva submitted her candidature. At the beginning of October 2009, Borisov clearly stated that he wanted Bulgaria’s EU role to grow more and more significant. “We want the post of Energy Commissioner” Borisov stated. The Prime Minister then added he would be “happy with the Regional Development portfolio or the Infrastructures portfolio”. Zheleva, in turn, stated she would like to lead the Enlargement portfolio.

The first disappointment came at the end of November when Barroso officially recommended Zheleva for the post of Commissioner for International Cooperation. This is considered a less prestigious position since it is subject to the decisions of the EU High Representative for Foreign Affairs. Opposition leader and former socialist Prime Minister Sergey Stanishev did not hesitate to define the EU’s decision from Brussels as a “slap in the face” to the new Borisov government. According to Stanishev, the EU was offering Bulgaria a post as a “Commissioner’s helper”.

The government tried to react well, but in the end Zheleva had to face the worst-case scenario: she had to give up her European ambitions completely and resign from her post as Minister of Foreign Affairs. The ambitious former MEP is at the end of an amazingly high-flying yet short political career.

For the Borisov government and the majority party GERB (Citizens for Bulgaria’s European Integration), it is still too early to assess the long-term consequences of the “Zheleva case”. As far as Bulgaria’s internal politics are concerned, Borisov was able to defend himself against the attack even though he was not able to avoid it. The opposition is currently too weak and fragmented to take real advantage of the government’s false step. Besides, the Prime Minister succeeded in arousing in Bulgarians the natural feeling of self-defence one feels when one's country has been attacked.

At the European level, the “Zheleva case” further confirmed Bulgaria’s reputation as the “EU’s difficult child”. However, Borisov can still make up for the mistake he made: Kristalina Georgieva’s nomination, promptly proposed to Barroso, is likely to be approved without further coups de teatre.

Notwithstanding these considerations, the Zheleva case poses further problems for GERB and the Bulgarian government; the question is, are the mechanisms regulating the appointment of the party's highest-ranking officials efficient, and is the system of promotion a valid one? In June, the Bulgarian people elected the charismatic figure of Boyko Borisov. During his electoral campaign, Borisov promised to choose only the best and took upon himself the responsibility of nominating the unknown people he included in his government.

Zheleva’s debacle, however, was a sign that one of the key figures in the government did not meet the transparency and competency requirements the People’s Party and its leader claimed to have strictly applied. This casts a shadow on many other GERB politicians’ behaviour during the last months.

This assumption seems to be further confirmed by the government’s “second choice”: Kristalina Georgieva is not a member of the party, but an experienced expert whose reputation was built during years of hard work in a prestigious financial institution: the World Bank.