Bulgaria, "quasi-media" on the rise 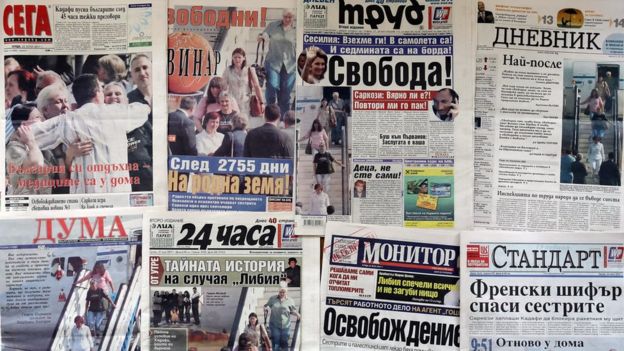 (Originally published by Mediapol, media partner in the ECPMF project)

The growing presence of political and corporate propaganda in Bulgaria's media is the most obvious indicator of the ongoing transformation in media ownership in the country.

The market is increasingly occupied by the so-called "quasi-media", pro-government propaganda agents and publications that carry out smear campaigns against politicians, journalists, and newspapers that "do not follow the official line".

These are the main conclusions drawn in the recently published 2016 Annual Report of the US State Department on human rights.

The report quotes the index on media sustainability annually prepared by IREX (International Research and Exchanges Board), which points out that serious issues related to the media ownership persist in Bulgaria.

"What is most concerning is how corporate and political pressure, together with lack of transparency and growing concentration of media ownership and distribution as well as government control on the distribution of resources and financial support to publishers, seriously limit pluralism of information in the country", states the report of the State Department.

The report also cites a study by the Association of European Journalists (AEJ-Bulgaria), which argues that the "culture of pressure against journalists" restricts freedom of expression in the country in a structural way. 72% of journalists surveyed have witnessed pressure on colleagues, and 67% acknowledge that politicians are interfering heavily in their work. In 2016, the AEJ denounced that public institutions can "put media outlets on the payroll" and influence the editorial content through rules and regulations that allow the direct allocation of public resources to gain visibility on print and electronic publications without need for tenders.

The report of the State Department cites some particularly burning cases: the pressure exerted through fines and sanctions by the former leadership of the Commission for Financial Control (KFN), in the person of Stoyan Mavrodiev, against the publishing group "Ikonomedia", which publishes the dailies Dnevnik and Kapital; journalist Stoyan Trenchev beaten up in the town of Pomorie; the letter from former Minister of Culture Vezhdi Rashidov against journalist Georgi Angelov of public television BNT; the dismissal of caricaturist Chavdar Nikolov from Nova Televiziya; the case filed by Investbank against reporter Ivan Bakalov; and several other similar incidents.

Bulgaria, "symbol of the deterioration of freedom of expression"

Much debate on transparency and regulation of media ownership in Europe was raised in 2013 by the "European initiative on the media", which hoped to collect one million signatures at the EU level. The initiative aimed at submitting to the European Commission a law proposal supported by at least one million EU citizens from at least seven different EU countries, as provided by the Lisbon Treaty.

In 2014, however, the campaign ended unsuccessfully, having collected only 204,812 signatures. However, promoter association "European Alternatives" noted that in Bulgaria, "the country symbol of the deterioration of freedom of expression", the number of collected signatures exceeded all expectations.

Bulgarians have no trust in their own media

Recently, international organisation "Reporters without Borders" (RSF) also published an extensive study that criticises "the serious limitations on press freedom in Bulgaria", arguing that most Bulgarian media outlets are in the hands of a small group of entrepreneurs, that in close collaboration with politicians dictate their editorial line. According to "Reporters without borders", the government buys the loyalty of media outlets through press subsidies, mainly thanks to European funds.

For these reasons, in recent years, Bulgaria – despite being a full member of the EU – has dropped from 35th to 113th place in the ranking of press freedom compiled by the organisation, and in spite of its full membership in the EU remains behind countries like Ukraine, Kosovo, and Uganda.

"A reason for concern is that today only 1 out of 8 Bulgarian citizens trust the media. The EU must insist – in a much more decisive way than it has done so far – for Sofia to distribute financial contributions from Brussels in a truly transparent way. The government should respect the EU's principles in terms of pluralism and professional freedom and independence of journalists", says Cristian Mihr, director of "Reporters without Borders".

Journalists in Bulgaria are often subject to limitations in their work as a result of the strong political and financial pressure. The very survival of many media outlets depends on public funding, through which the government influences the editorial line and rewards the "friendly media", says RSF. As convincingly demonstrated by the Organisation of the Media for South-Eastern Europe (SEEMO), a significant portion of these resources comes from EU funds. According to the organisation, between 2007 and 2012 Bulgaria distributed 3.6 million Euros in all but a transparent manner, with open preference given to pro-government newspapers, radio, and television outlets.

An investigative report by Dnevnik journalist Spas Spasov showed how, over two years, another 1.4 million Euros in EU funds were distributed in ten municipalities, thus securing an "understanding" attitude by the local media.

Few business people control most of the media in Bulgaria, using them to pursue their own ends, especially financial ones. Such networks of plots, clientelism, and lack of transparency are most recognisable in the case of Delyan Peevski, the most influential publisher in the country. According to RSF, his “Nova Balgarska Mediyna Grupa” (New Bulgarian Media Group) has maintained close relations with all the governments of the recent years.

"Today, the publisher and MP owns or controls most local and national newspapers, including Telegraf, Monitor, Politika, some of the most popular news portals like Blitz and Pik, (although not officially owned by Peevski), as well as national television Kanal 3 (also unofficially). In addition, Peevski controls much of the newspaper distribution system and as a business owner remains one of the most influential advertising buyers in Bulgaria", argues RSF.

According to RSF, the deep structure of the media empire that Peevski built with his mother, Irena Krasteva, remains shrouded in mystery, although the two made public the names of the media they own in August 2015. In many cases, the extremely complex management model and the presence of "fake companies" make it extremely difficult to trace the true owner of the print or electronic media.

RSF claims that transparency rules in Bulgaria are not very effective and are applied insufficiently. The situation has not changed since a 2014 law prevented legal entities, registered in foreign tax havens, to control media outlets in Bulgaria. According to many observers, this prohibition mostly hit Peevski's competitors on the media market.

"The links between Peevski and political elites are extremely visible. The loans that have allowed the tycoon to create his media empire came mainly from the Korporativna Targovska Banka (Business Corporate Bank), where the Bulgarian state had deposited most of its assets at the time. At the time, Peevski's media were extremely close to the government (a coalition led by the Socialist Party) and critical of then mayor of Sofia Boyko Borisov.

However, when Borisov became prime minister, the very same media outlets suddenly switched sides, exalting the achievements of his government and attacking – bordering on defamation – its opponents, also intimidating those journalists who dared to criticise the relations between Peevski and the government", says RSF.

The most serious pressure on newspapers

Political control over the media and pressure by political and business circles are the main problems for freedom of expression in Bulgaria also according to a report on media pluralism presented by the Foundation Media Democracy at the end of 2016.

The report describes a high degree of political control over the press, moderate for television, and lower for radio stations. "Publishers and other financial actors regularly exert pressure on editorial policy", is the opinion of Neli Ognyanova, professor of Media Law at the University "Sv. Kliment Ohridski" in Sofia.

According to the report by the Media Democracy Foundation, although there are rules against political interference in the work of journalists, the law does not prohibit or restrict direct or indirect ownership of media outlets by politicians.

"In Bulgaria there are currently two party TV stations, Alfa TV and SKAT, while six daily newspapers are officially owned by MP Delyan Peevski. There are systemic conflicts of interest between publishers, government parties, and political groups. Political influences affect both the national and local media. Against a backdrop of high control on the press, at least the national news agency (BTA), funded with public money, enjoys a reputation of being politically independent", the report concludes.