Divided Cities: Life at the frontier 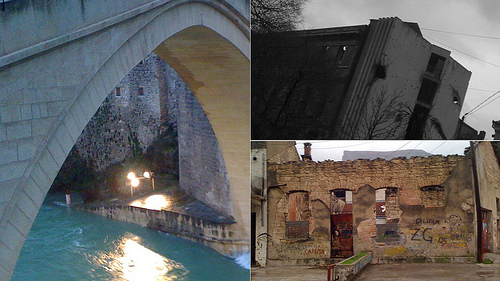 Mostar, Berlin, Kosovska Mitrovica, Beirut. Four cities marked by a common fate: divided, ghettos for their own citizens and frontiers between worlds in conflict. The “Festival of Art in Divided Cities”, held in Mostar in April, sought to demystify stereotypes and to create new connections

Human alienation and occupation of the city's public space were in focus at the “Festival of Art in Divided Cities” organized in mid April in Mostar (Bosnia and Herzegovina) by Mostar’s “Abrasevic Youth Culture Centre”.

The festival was a small revue of human stories from the divided cities of Mostar, Kosovska Mitrovica, Beirut and Berlin. In an attempt to demystify the stereotypes on the divided cities, for five days, the participants could vigorously compare their experiences of life in a ghetto and at the frontier between conflicting communities.

Many of the participants felt that belonging to a “divided city” has a deeper meaning than politics. The “meaning” includes every human tragedy and misfortune of each current and former resident of their cities, the ruins of their past lives and of the urban spirit of their cities, and their striving to rescue the cities’ memories and public spaces from oblivion and new occupiers.

An activist with the Abrasevic Youth Centre, Mela Zuljevic, said, “Our goal was to open new and different public spaces through art.” She adds, “We want people to rally around a piece of art or artistic action and give a new meaning to public spaces, for people to be connected ‘now’ and ‘here’.”

Mela said, “Architecture always reflects a society in which it is created. Architecture in divided cities is a materialisation of fear and control. It is used as a mechanism to maintain the divisions between the communities in conflict.”

An architect from Beirut, Rani Al Rajji (33 years old) believes in physical contact as the strongest weapon to remove fear from borders and says, “Fear comes from not knowing each other. I believe in primal human contact, and that is touch. And, the art is very tactile. Visual art is an easier form of art because you use the greatest human sense, which is sight. However, I think that it is more important to reach the art of touch, to feel the situation.”

Therefore, in Mostar, Rani proposed an unusual public performance of the popular children’s game “Twister” at the Spanish Square, a place connecting eastern (Bosniak) and western (Croatian) parts of the city.

At the performance, next to the usual Twister colours, Rani placed the Croatian and Bosniak war insignias, which provoked two war veterans, a Bosniak, Omar, and a Croatian, Ljubo. While passionately touching the Croatian insignia, Ljubo admitted he was now seeking some sense in life through the comfort of cocaine.

The Spanish Square built at the city’s former park, close to “The Boulevard” dividing the city, was given by the Spanish government to the people of Mostar. However, residents do not really feel the park belongs to them. Fifteen years after the war, Mostar is still a divided city and filled with contrast; skeletons of the destroyed houses lean against reconstructed buildings and fresh facades.

In the eastern, Muslim part of the city, the shopping centre is almost empty. Except for the “Stari Most” bridge area with many tourists, streets are not crowded. At the local bazaar, one can buy stone pieces of the old destroyed bridge, military medals and war tools. People are warm, but their faces show sorrow and apathy.

The western, Croatian part, is different. On first sight, it looks less destroyed, more modern and vivid, defiant and richer – crowded shops, loud music and noise from the crowded cafes and expensive limousines.

Despite a single city administration and police, Mostar is still burdened by divided school systems, utility services, post office and even a street with three different names. Mostar also neglects its common prewar history. In the centre of the city, a construction-site fence now camouflages the grandiose, monumental park honouring the partisans, designed by Bogdan Bogdanovic, the greatest Yugoslavian Communist architect.

Activists from the Abrasevic NGO sneaked their guests into the park through a small crack in the fence. The huge, unmaintained space is now a forgotten scenery. The peak of the monument unveils the beautiful panorama of Mostar surrounded by snow-capped mountains.

A similar snow surrounded other journeys and human sufferings in another part of Europe. An artist from Berlin, Sonya Schoneberger, dedicated her film “Where is the popcorn?”, to her friend Sanna, who recently died and had taken part in this festival preparations.

In the film, Sonya tells the true story of Sanna's illness, later death and her crossing the borders of different countries and recording other people’s stories, thus creating a circle of interweaved human fates. The circle is followed by snow and whiteness. No borders in the end, except for human pain.

Sonya said, “While looking at all of this in Mostar, I was originally thinking that Berlin does not fit into the story on the divided cities. We have the historical aspect of the imposed division. Then, I was thinking, there must be other things. Berlin looks like a capital now, but it is still a poor city because there is no industry, as in the south of Germany. Berlin is some sort of island, it was an island in the past between the two Germanys and perhaps it is still an island.”

Sonya said, “Artists come all over looking for an inspiration, but Berlin has now become a party city, so the question is what about the real life? Berliners are pushed at the margins. The two systems from the two different countries have still not become one, in spite of the promise. It is a process.”

Another film, “What is architecture and what is culture?”, was done by an amateur examining the internal frontiers between residents of the northern part of Kosovska Mitrovica and their streets. Before the film’s projection, the filmmaker, Tanja Vujisic, said that the film is brutal and raw. The shots reflected the brutal denial of urban public space and the pessimism of pedestrians in the northern part of Mitrovica.

She said, “These spaces are taken away from the dwindled urban community of Kosovska Mitrovica. They are destroyed and occupied with hundreds of ugly kiosks, buildings and new construction sites. We have no freedom of movement because there is simply no public space, so my fear comes from a feeling of hopelessness that we will ever get back our wide streets and pavements.”