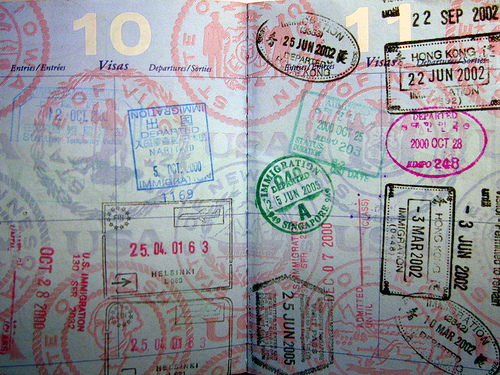 The European Commission proposed visa liberalization for Macedonia, Serbia, and Montenegro, which would bring an end to a costly and sometimes humiliating ritual for people who need to travel abroad. Kosovo, Bosnia and Albania, though, were excluded from the recommendation

A "historic day", the "fall of the wall", the "end of visas", these are some of the headlines in the Balkan media today.

In what was truly a historic day yesterday, the European Commission (EC) proposed visa liberalization for Macedonia, Serbia, and Montenegro. The visa-free travel would ideally be possible from 1 January 2010. Macedonia has already fulfilled all the technical conditions, while some benchmarks still remain to be met Serbia and Montenegro. The EC proposal would next be discussed in the European Parliament, and the final decision on it would be made by the European Council later in the year.

"I trust that this proposal should be adopted by the EU member states by the end of this year after we have also consulted the European Parliament", said Enlargement Commissioner Olli Rehn at the announcement of the Commission's proposal yesterday in Brussels.

Visa liberalization will bring an end to a costly, unpleasant, and sometimes humiliating ritual for people who need to travel abroad.

"For the citizens of the Western Balkans visa free travel means no more queuing at embassies, no more visa fees, and no more collecting of supporting documents such as invitation letters, tickets and paying for their translation", said Commissioner Rehn.

"In a nutshell" he added "this will mean a further Europeanization of the civil societies in the Western Balkans and it is an example that European integration is not only a matter of integrating nations, but also peoples and citizens".

The news was greeted with undivided enthusiasm in the three countries. The issue of painful visa regime has made headlines and topped political agendas for some years."Our citizens deserved this, and this is success of the European idea in Macedonia", said Macedonian Prime Minister Nikola Gruevski, welcoming the news in Skopje.

Montenegrin Prime Minister Milo Djukanovic received the news in Kotor where he was in a meeting with EU's HFSP chief Javier Solana. Mr. Djukanovic said that Montenegro will meet the remaining conditions by October, and expressed confidence that his country will be visa free on 1 January 2010.

"We have fulfilled most of the conditions from the roadmap for visa liberalization and now we have a few more things to do", said Mr. Djukanovic, "there is no doubt that our partners will be satisfied with our results".

In response to the motion from Brussels Wednesday, Serbian President Boris Tadic said that the Commission's recommendation is an important thing for the citizens of Serbia. He added it was good that other countries in the region would also be visa free because that would improve the quality of life in the region overall.

"Serbia is not responsible only for itself, but also for the cooperation in the region, given that it is the central country in Southeast Europe", said President Tadic. Serbian Prime Minister Mirko Cvetkovic added that visa liberalisation would restore people's dignity. "From 1 January the citizens of Serbia will be able to travel without visas to Europe, and this will give them back their dignity", said Cvetkovic.

Serbian Deputy Prime Minister for European Integration, Bozidar Djelic also welcomed the move but underscored work had to continue. "The visa darkness has been lifted from the citizens of Serbia, but there is no time for relaxation. We have to continue the reforms..." Mr. Djelic was also cited by Serbian media to compare the fall of the visa barrier with the national holiday celebrated by the French, the fall of the Bastille in 1789.

Some of the reactions in Serbia expressed concern over the fact that the visa liberalization will divide Serbs in Serbia from Serbs living in Kosovo. The visa free travel will be a possibility for Serbian citizens with biometric passports, but because of security concerns, even with new biometric passports, residents of Kosovo will still need visas. Kosovo authorities accepted the decision as a further recognition of their separate independent status from Serbia.

In addition to Kosovo, Bosnia and Herzegovina and Albania were excluded from the recommendation since they did not make sufficient progress with the needed reforms. Mr. Rehn however left the door open.

"The 'roadmaps' that the EU gave them last year are still valid, and they are still perfectly doable if the authorities in these two countries put their full will into delivering now", said Mr. Rehn. "If Albania and Bosnia and Herzegovina keep up the pace of reforms and thus meet the conditions the Commission could envisage making a new proposal by mid-2010", added Mr. Rehn.

Bosnia greeted the news with expected disappointment, but Minister of Civilian Affairs Sredoje Novic, said Wednesday that the government could start issuing new biometric passports by mid October. BiH officials hope that could allow the country to join the first three countries by mid 2010.

Reactions in Albania also tried to promote optimism. Albanian Interior Minister Bujar Nishani said that Albania only needs to meet a few technical conditions in order to join the visa liberalization process, and that the country would come on target by the end of 2009.

After a longer period of time, Brussels send an encouraging message to the Balkans. For most people in the Balkans the European idea is by and large associated with the freedom of movement.