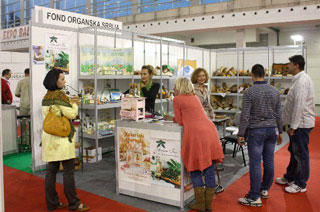 The growth of organic agriculture in the Balkans is inevitably tied to an increase in consumer awareness. Trade fairs in this sector therefore become an indispensable medium. Something has started to move. An interview

Information, communication with consumers and raising their awareness are some of the essential ingredients for increasing the trade in organic produce. Consumers often know little about the production methods used and therefore find it difficult to recognise the reasons for chosing organic produce versus traditionally farmed goods. This is also why consumers are less inclined to pay the extra costs, that normally characterise certified products.

To the popular arguments that organic produce is higher in quality and healthier, one should also add environmental factors, such as less energy consumption, respect for soil and the contribution to biodiversity upkeep. These charactersitics are certainly more complex and difficult to identify directly, that only an extremely careful and well-informed consumer may know of. This is why communication and information strategies are all the more important for the growth of this sector.

The fairs, diverse as they may be (local, regional or international; professional or generalist), remain one of the most used tools for bringing agencies in touch with consumers and for promoting a trust-based relationship between them, another indispensable element in the organic sector.

By now at the European Union level trade fairs in this sector have a strong history (Biofac; Sana), whereas the Balkans are still taking their first steps. Here organic products are displayed in specific areas of agricultural or local product fairs or sometimes even in more generic fairs.

One of the first experiences of a regional fair fully devoted to organic products is the Bio Balkan Expo, launched for the first time in Belgrade in 2010 and repeated in September 2011. We talked about it with Branko Čičić, president of the Serbian Organic Foundation.

How was Bio Balkan Expo born?

South East Europe, including Turkey, has a population of about 140 million in an extrememely diverse territory with significant potential for almost every type of produce: arable crops, vegetables, fruit, livestock breeding, medicinal plants, small fruits, bees. In particular consumer interest and awareness are growing, thus enabling the development of a highly important market, as much for local producers as for foreign ones.

These factors have been recognised even by the Serbian Agriculture, Forest and Water Resources Ministry, by IFOAM - International Federation of Organic Agriculture Movements, by the Serbian Organic Foundation and by the A & L Expo (one of the primary Serbian operators in the trade fair business), that have all pledged to support the initiative.

To create a regional platform for sharing knowledge on organic products, to put producers, distributors and consumers in touch, and promote a culture of organic consumption, both among producers and consumers.

So the target market is not just professionals...

Let’s say that the Bio Balkan Expo can be defined as a multi-target fair: it addresses both local and international producers, as much as consumers. In our view there cannot be a dividing line between producers and consumers, who instead should be connected by sharing a common 'organic culture'.

We are also trying to involve the main distributors in a more active way, especially by organising business meetings for trade at the fair.

Another important component for the involvement of these stakeholders is obviously communication through the media: last year's participation was encouraging and this was mainly due to good media coverage of the event.

Let’s talk about services. What does the Expo offer?

Within the Seenet II action on the development of farm-holiday tourism in the BiH mountains, led by the Piedmont Region, besides the activity foreseen by the project related to the production of a guide to organic and traditional products from the Zenica area, as a result of the training activities held in both Bosnia Herzegovina and Italy in the first year of the Programme, a strong interest in this sector has emerged on behalf of all the Bosnian partners.

What are the statistics of the 2010 edition?

90 exhibitors, 72 local and 18 international, representing 12 countries: Austria, Bosnia Herzegovina, Croatia, Germany, India, Italy, The Netherlands, Slovenia and Hungary. And a total of more than 1,800 visitors. These are obviously smaller numbers compared to the main European Union fairs, but, as a regional initiative exclusively addressing the organic market, I think these are satisfactory results. For 2011 we expect 150 exhibitors, including some national ones.

With a focus on the promoting agencies, what were the most showcased products at the Expo?

And what about products outside of the food sector?

Only a few, but in 2011 the number should grow. In 2010 we had the Indian exhibitor Ram Raj Clothing with clothes made of high quality organic cotton, and producers of essential oils from Bosnia Herzegovina and Croatia.

And looking at the local market? What products are showcased?

We continuously monitor the market in order to understand its developments and especially which products are the most sought out and available. According to some distributors, there’s often a lack of products like pulses (especially beans, lentils and peas), cereals (soft wheat, buckwheat, barley, millet, rye) and pasta. Reserves of local products are sold very quickly and the distributors are left without products for most of the year. There’s also a problem with the variety, in the sense that the range available is quite limited. For example olive oil, dried fruit and organic vegetables were only recently brought into the market.

Moving on to the consumers. What is the profile of the average consumer?

In general I’d say young, educated and mindful of the family. But there are some good consumers among the elderly, as well. In a way economic availabilty is relatively less important, in the sense that it mainly influences the variety and the quantity of purchases, but it doesn’t distance the consumer from organic products. At the open air market of Kalenić (in Belgrade) where some organic products are available, one will often find young and old regularly buying very limited quantites. In these cases the motivation and awareness at the base of the purchasing choices are certainly very strong.

We are obviously talking of very limited numbers still: the average consumer is generally not very aware and probably still not ready to understand the principles and advantages of buying organic products. It’s going to take much longer to get people to become more sensitive, but the steps made in these last years are encouraging.

And at the producer end? Who are the organic farmers ?

According to a study conducted by the German International Development Agency (GTZ in the past, GIZ since January 2011), with the support of AFC Consultants International and of the Research Institute of Organic Agriculture (FiBL), more than 60% of certified organic farms are smaller than 6 hectares, while 25% are between 10 and 25 hectares. With these dimensions, the farms are mostly family run with 50% of them hiring workers periodically during harvest season.

A fact that should be highlighted is the presence of many women at the helm of these businesses, often with extremely positive experiences, proving an increasing interest on behalf of the female population towards organic products. Maternal sensitivity and more attention towards health, probably. And perhaps, even a trend launched in these past few years by some ecceptional celebrities such as the First Lady, Michelle Obama, and the Queen of England, Elisabeth II.

Getting back to the Bio Balkan Expo. Are there any connections with Italian fairs?

Unfortunately there is no collaboration at the moment, but we are trying to get it going, also on the basis of the importance of the organic sector in Italy, both as a market and as a producer. I believe that Italian organic producers should look towards the Serbian market with interest, also because of the strong demand of cereals, oil, dried fruits, pasta, sauces and processed foods.