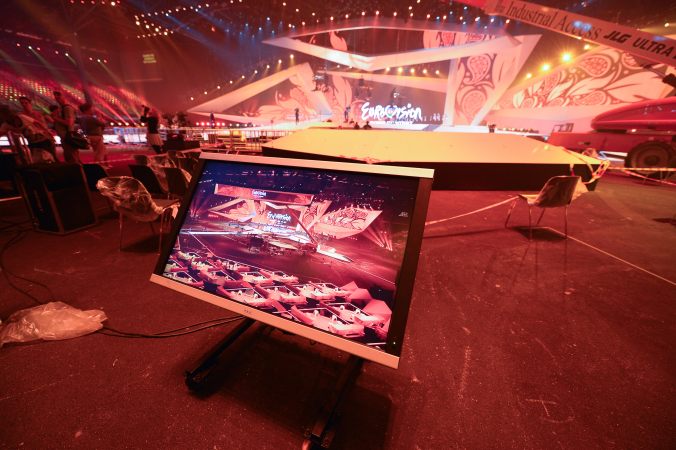 This week, Baku hosts the most expensive Eurovision song contest ever. The government sees it as a chance to boost its image abroad, while human rights activists see it as a unique chance to put in the spotlight the dire state of democracy in the country

Azerbaijan’s duo Ell and Nikki came first in the last year’s Eurovision song contest with their hit song “Running Scared”. The duo was competing against 43 other countries in a celebrated song contest that has been on prime-time television across Europe, hosted in a different country each year, for several decades. For many contestants, winning Eurovision - a kitschy pop song TV competition – doesn't mean much, but not so for countries like Azerbaijan: the winner gets to host the contest in their home country the next year. In the history of the Eurovision contest, the country is topping spending records ($75.5 million USD), surpassing previous years’ hosts Russia ($40 to 44 million USD) and Norway ($37 million USD). This year, Azerbaijan's contestant is Sabina Babayeva who will perform the song “When the Music Dies”. Visitors who will be in Baku during this glitzy song contest are going to see the capital full of bright lights, brand-named boutique shops, lavish restaurants, and black jeeps speeding on the streets of the capital. But one wonders how well all of this glitz and glamour represents the real Azerbaijan, as it certainly doesn't reflect the reality of most residents.

A song contest at the people's expense

A report released in January of this year by Freedom House ranked Azerbaijan as “not free” with an overall deteriorating trend in political rights and liberties. Human Rights Watch disseminated a video earlier this month addressing the country’s appalling human rights record. Its press freedom record isn't any brighter: Azerbaijan ranked 162nd out of 179 countries on the Reporters Without Borders' "Press Freedom Index." According to Amnesty International, there are 14 “prisoners of conscience” as of April 2012, but more would fall under this definition if its terms were broader. Persistent pressure is applied on human rights defenders and lawyers. On its "Corruption Perception Index," Transparency International gives the country a score of 2.4 out of 10, with 10 being the least corrupt, placing the country alongside Russia, Nigeria, and Belarus. International broadcasters such as the BBC and Radio Liberty lost rights to their radio frequencies in the country in 2009. Current President Ilham Aliyev (who replaced his father in 2003) abolished presidential term limits via referendum in 2009. The most recent parliamentary elections in 2010 were described as a farce by Human Rights House, with no opposition party members winning seats.

And amidst all of this, Azerbaijan boasts of it modernity in widely-distributed self-promo videos and in public statements made abroad, conveniently forgetting to mention anything about the illegal evictions that have been carried out systematically over the last three years, especially in the main downtown Baku area, in order to make way for new construction projects (some 4000 houses were demolished in total) and the so-called “city beautification” projects. Nor do any of the promo materials show beaten and hospitalized journalists, arrested political prisoners, and activists...all taking place in a country that has pledged to guarantee freedom of speech as a member of the Council of Europe.

Who doesn’t have arrested journalists and bloggers behind bars?

Ali Hasanov, a senior official in Azerbaijan’s Presidential Administration, recently led the country’s delegation to a meeting held in Geneva organized by the European Broadcasting Union. The event brought together Azerbaijani officials and representatives of the civil society. During the meeting, Hasanov admitted that journalists in Azerbaijan face a dire situation, as does the state of freedom of the press. However, he referred to the international outcry as too harsh. “Which country does not have the problems you see here [in Azerbaijan]? Which country does not have a blogger behind bars?” Hasanov is among many government officials claiming that the Eurovision song contest is unjustly politicized.

In contrast to Ali Hasanov, activists across the country claim the uproar is justified. A parallel initiative, launched in the lead-up to Eurovision broadcast in Azerbaijan and called Sing For Democracy, is working fiercely to uncover the truth about the country’s deteriorating human rights and free press situation. Its core founders are several human rights organizations based in Azerbaijan including the Human Rights Club, Institute for Reporters’ Freedom and Safety, the Institute for Peace and Democracy, and Alliance for Defense of Political Freedoms. There are another 30 local non-governmental organizations (NGOs) and over a dozen international human rights watchdogs supporting the initiative at home and abroad. They are pushing for an "alternative information center" to keep foreign visitors informed of the reality on the ground in Azerbaijan in the run-up and during the contest. And yet, the region’s largest and richest capital shows little concern for this initiative, brushing off the international criticism for its roughshod treatment of the local media and political critics. Not surprisingly, the ruling family is also linked to the organization of the contest: the country's chic, fasion-icon first lady is in charge of the organizing committee and the president's son-in-law, a pop singer, will be performing during the concert. 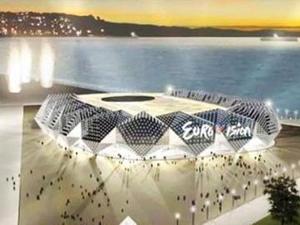 Baku Crystal Hall - a complete glass and steel concert hall to seat 23,000 and built exclusively for the contest cost local authorities an astonishing $134 million USD. According to a spending review published by Tol, part of the funds to build the venue were already earmarked in the budget for renovating water and sanitation systems in Azerbaijan's region and for increasing salaries and pensions.

Described by Leyla Aliyeva, daughter of the Azerbaijani president, it is “unlike anything seen before” with “an amazing seaside panorama”. The hall is located on the Caspian Sea east of National Flag Square with a 162-meter flagpole. The construction of the hall came at a high price, but not for the local authorities. Baku officials ordered the demolition of hundreds of homes around the concert hall and the surrounding area. These claims however were quickly dismissed by the Azerbaijan authorities as being part of larger infrastructural city development project (similar to the city beautification project). After the concert hall was completed, an article in Radio Free Europe Radio Liberty exposed a linkage between the Presidential family and the construction of the hall. According to the article, the family profited from the construction of the venue “through its hidden ownership in the Azenco construction company”.

Political thaw is only temporary

As the city is getting ready to host one of the most-watched and televised events in Europe, local opposition parties and activists have been pushing their own demands: the immediate release of political prisoners, freedom of assembly, resignation of the president and all members of the current regime, and more. In one of the most recent attempts to publicly voice these demands, opposition party members and supporters organized an unsanctioned rally in the capital on May 14th (any demonstrations organized outside of the ruling government’s patronage are allowed only outside of the capital's city center). The rally was dispersed by the local police and several of the demonstrators were arrested.

The main organizer of these small-scale demonstrations is a group known as the Public Chamber (Civic Movement for Democracy Public Chamber). The chamber unites some of the veteran opposition figures and those who are dissatisfied with the current regime. It was formed following the parliamentary elections in 2010, having failed to secure any seats in the parliament. The Public Chamber will also set up a press center during Eurovision to inform the international audience of what is really happening on the ground in the country. However, while some of these demonstrations are happening, human rights advocates and activists at home fear that the clap downs will intensify after Eurovision is over and international attention shifts elsewhere.

But beyond the protests and rallies, the atmosphere in the capital is festive. The city’s residents look forward to the concert. In a video released by one of the local on-line news outlets, people only speak positively and with much enthusiasm. “I am expecting a fantastic show and unforgettable moments,” says a young man in the video. Another respondent claims that this is going to be “the best show in the history of Eurovision”.

Today starts the Eurovision song contest. Thousands, if not millions, of visitors will gather in Baku and in front of their TV screens to watch the competition at the Crystal Hall. Many will watch it inattentively, thinking about the costumes, the performers and their songs. Many will either visit or hear about Azerbaijan for the first time. But the glamour and charm of hand-made carpets, the soft sounds of mugham, and delicious cuisine are only façades covering the bitter reality of a country where people 'run scared' from much more than a simple pop song.