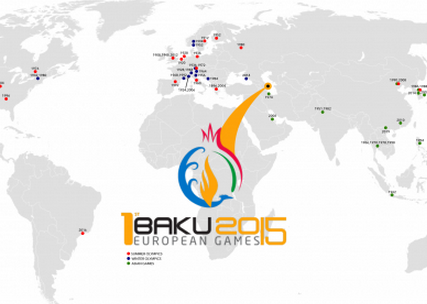 In some three months from now, the capital of Azerbaijan, Baku will open its doors to over 6,000 athletes from around the world. Baku is the host country of the 2015 European Games – the inaugural edition of an international multi-sport event for athletes representing the National Olympic Committees of Europe (NOCs). If all goes according to the plan, the next games will be in four years.

From June 12 until 28, athletes are going to compete in 20 sports with representatives of 50 NOCs.

As guests, international observers and athletes prepare for their trip to the wonderful land of beauty and glamor, as advertised by the government of Aliyev, the time has come to understand the costs of all that glitz.

Baku was chosen as the host of the games following a secret balloting but, for many, the transparency of that decision remains questionable. The country is notorious for “winning” in international competitions. Take for instance the 2012 scandal , when the news of Azerbaijan bribing boxing officials in exchange for two gold medals was leaked to the press. Similarly, there was news of the country trying to bribe the jurors at the 2013 Eurovision Song Contest.

In 2012, the government of Azerbaijan entered the stage of international competitions and contests by winning the Eurovision song contest the year prior. Having seen Russia’s generous investment just three years before (2009), Azerbaijan too wanted to spend big.

This year, the country is hosting a new competition. Rumor has it: the idea of the European Games was created on Aliyev’s request. And it’s turning into an expensive rumor. While the authorities and the organizers of the event are keeping the total spending costs a secret, the games are costing the country some $8billion, according to UK based publication Business New Europe (BNE.eu).

The organizers believe it's going to be “the most fantastic show ever staged in Azerbaijan, one that will make the Eurovision song contest seem like a small, local event”, said BEGOC Chief Operating Officer, Simon Clegg.

Apparently, the artistic director of the 2004 Olympic games, which were held in Athens, is doing the opening ceremony of the games in Azerbaijan.

However, this is going to be a far more costly affair, especially now when the government officially stated its plans to cover expenses of all 6,000 athletes. When the question of the legitimacy of this decision was addressed to Steve Scott, the liaison officer at the European Olympic Committee, a more generic response was provided:

“The issue of support grants, similar to those featured at the Olympic and Olympic Winter Games – and those of other global events of this scale – formed an important part of the negotiations to stage the inaugural European Games. Indeed, the requirement was part of the host city contract, and an obligation placed on the Baku 2015 Organising Committee by EOC.”

The decision was made as part of the obligation on official Baku, and yet, the organizing committee only went public with this obligation once the Guardian broke the story of the Baku organizing committee covering all costs of the entire British team, which includes 160 people. What is not clear, however, is if this obligation was introduced from the beginning. Then why would the British Olympic Association “admit” that the organizers were covering their costs?!

The liaison officer Steve Scott failed to respond to this and a few other follow up questions.

Where does the money really go

During the 2014 Winter Olympic Games in Sochi, half of the $51bn disappeared. Some of it went into personal savings account, some of it just got lost in between multiple transactions, and some of it was rightfully appropriated.

While these games are costing Azerbaijan far less (based on the official information), given the country’s vibrant history of corruption and money laundering, the likelihood of a similar act of David Copperfieldesque disappearance is high. Even if the CEO of the Operational Committee of the Baku European Games (BEGOC) says, “the funds and spending of the first European Games are being strictly controlled, and the public is being constantly provided with information on this subject”. So far, however, the one thing that is constant is the lack of information.

As the official Baku tries to hide some of the information, they can’t hide everything.

Human rights concerns have reached its highest in Azerbaijan in the past year, and on this particular topic there is abundance of information.

In the run up to the European Games, to prevent any awareness and advocacy campaigns, President Aliyev, having learned his lesson from the 2012 Eurovision song contest, has locked up most of the prominent advocates in the country - just in case no one makes a peep. And to make sure they remain in jail long after the Olympics, all of them are accused of grave criminal charges ranging from tax evasion, to misappropriation, abuse of authority and more.

But Patrick Hickley, for instance, the president of the European Olympic Committee (EOC), cares little about the host country’s rights record. In a recent conference call, Hickley said that “the EOC could not have hoped for a better inaugural host – Azerbaijan has the cash to raise the profile of the Games and eager to position itself as an efficient host of major sports events”.

In an interview with Euronews, Hickley’s ignorance was even more visible. When responding to a question on limited press and rights abuse in the country, Hickley said that all accredited media who will be in Baku during the Games will have the freedom to report on the event.

Unlike Hickley, there are many who believe that “accredited media coming to the games” doesn’t mean that the host country has all the freedoms including free and independent media. The report released on March 4 , by the international rights watchdog Amnesty International highlights pressure and persecution. “Ilham Aliyev’s repressive petro-state has brazenly stepped up its harassment of journalists amidst international criticism”.

There are at least 20 prisoners of conscience in Azerbaijan, according to Amnesty International. The list of political prisoners is closer to a hundred. The range of prisoners goes from political activists to civil society heads, to bloggers and journalists. Human rights defenders are too among the long list of inmates of the Baku prisons. Index on Censorship says President Aliyev is using the games to “whitewash” the country’s deteriorating rights reputation.

In the past, most of these big sporting events showed that the costs far more outweigh the benefits. None of this really matters, however, as the authorities are not interested in benefiting the country as a whole, but rather are trying to build an image for a country. So far, the costs of this kind of image building are costing the country its future.

One of the athletes coming to compete at the European Games is Jade Jones, a taekwondo Olympic gold medalist who is also the acting international ambassador for the games. In an interview with the Guardian, Jones said: “We go to different places. Some places are better than others. I’m just going there to do my job and perform”.

The times are changing and the cause of fighting for rights and freedoms has become far bigger in its scope. So, if some places are better than others, perhaps it is better not to go to some places.