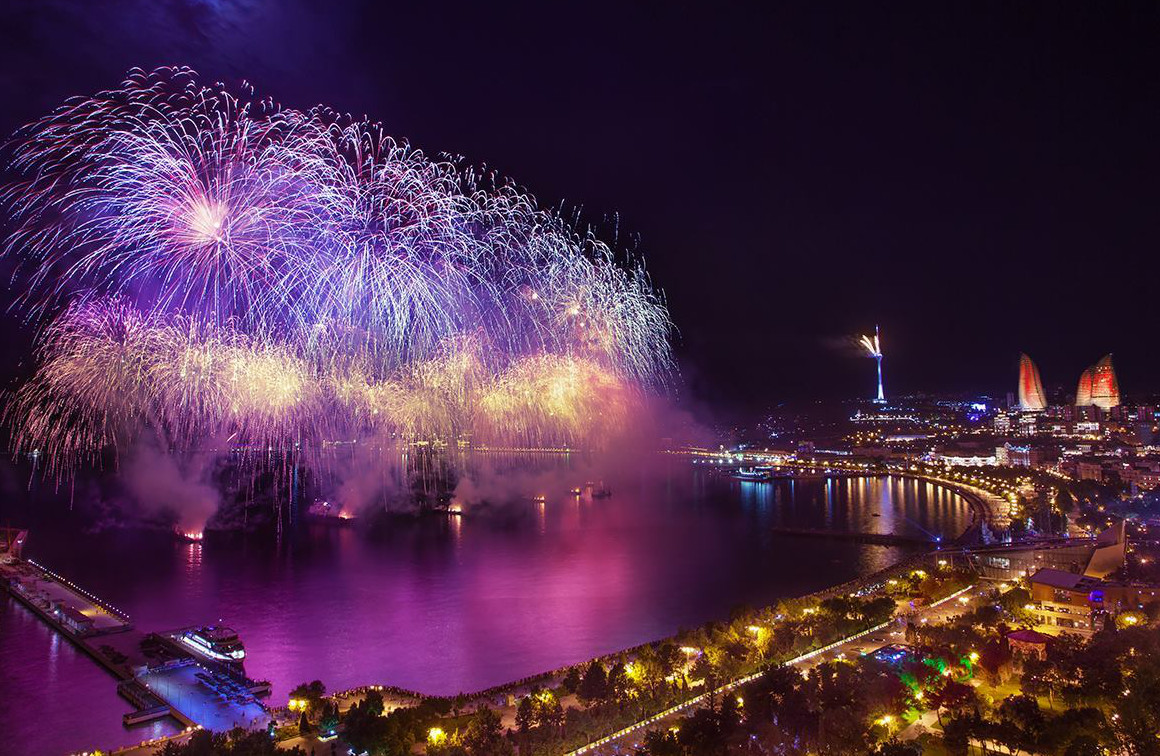 The opening of the Games - Urek Meniashvili

The European Games are not bringing to Azerbaijan the positive media coverage its authorities had expected, investing millions on the event. The best deal was Lady Gaga's

With a price tag of $95million, the opening show had everything in it. From flying carpets to flying bulls, rotating carpet motives brought to life by hundreds of women wearing specially designed costumes to fireworks, lessons on Azerbaijani literature and music, more fireworks, a surprise guest performance by Lady Gaga and her rendition of Lennon’s classic “Imagine”. Finally, more fireworks.

The brand new stadium that could seat 68,000 visitors was full of spectators for the opening. The commentators proudly announced the opening of the first European Games held in Baku. Days before the opening, thousands of athletes ascended to the capital of Azerbaijan representing 50 states and competing in 20 disciplines. They too took their seats among the spectators, having marched proudly through the arena the night of the opening.

But as fans and supporters watched the grand opening of the games, the country was getting heat from the international media outlets questioning not only the importance of these games but also the host. How come a country with a growing record of rights and media violations, a soaring number of political prisoners, a record of murky elections and more, is hosting such an event? Doesn’t it go against the Olympic Charter?

The opening of the games was officiated by the first lady Mehriban Aliyeva, who also happens to be the Chair of the National Olympic Committee, and by the President of the European Olympic Committee (EOC) Patrick Hickey, one of the key figures behind the games. Aliyeva, with a very stern and tense face welcomed the guests, and the athletes. Hickey addressed the crowd with much enthusiasm; after all, his baby project finally came to life despite the criticism. Hickey later noted the opening ceremony of the games was “remarkable”. Just months before the games, Hickey enthusiastically highlighted that “Baku 2015 will come to life through the dedication and effort of your entire country. It has been an absolute pleasure to work with the Azerbaijani leadership. Your professionalism and focus has never failed to impress us”.

Surely, a show worth $ 95 million cannot be anything less than impressive. Especially with such names as James Hadley, Cirque du Soleil’s senior artistic director, and Libby Hyland as creative director on board, helping Hickey to make his dream come true. Hyland previously worked on the Pan American Games.

But the European Games should not be confused with the Olympic games. They simply count as qualifiers for the Olympic games. Rumour has it; they were specifically designed to sooth President Aliyev’s loss in securing the rights to host the 2016 and 2020 Olympics.

The decision to host the games in the capital of Baku was made in December 2012, shortly after Azerbaijan was the host of the annual Eurovision song contest . One of the guests of the show was Patrick Hickey. He was impressed. The EOC was toying with the idea of the games for a while. So, when the time came, the decision to name Azerbaijan as the host was an easy one, even if that included “secret ballot voting”. Azerbaijan was the only country to make the bid in the first place. It is worth mentioning that Hickey’s first choice was Belarus. In 2008, he was behind the award for “Outstanding Contribution to the Olympic Movement” which was then given to the Belarusian leader Alexander Lukashenko. But Belarus did not offer to pick up the tab for the games, Azerbaijan did. Whether Hickey has affection for leaders with a certain reputation is a topic for another article, but the pattern of his chosen countries does raise questions, especially as he praised the latter and spoke of “pleasure” working with the government of Azerbaijan.

Not everyone is as happy as Hickey in working with the government of Azerbaijan. After all, the leadership of this country has a reputation for sacking and silencing those who speak against the decisions and policies of the government, and as many as 12 journalists and bloggers are currently locked up behind bars for expressing their “displeasure”. These individuals are part of some 80 in the list of the country's political prisoners.

Already for a while, the government of Azerbaijan was denouncing a so called “anti-Azerbaijan campaign”, and so it was not surprising to see the crackdown increase in the run up to the games. The authorities launched a massive witch hunt as early as 2014 to clean the playing field of all its well known critics, among them prominent rights defenders, heads of non-governmental organizations, activists and journalists. It also kept reporters from the BBC, The New York Times, The Guardian, ARD TV Germany and Radio France out of the country during the games. In addition to the government’s dislike of foreign correspondents, a number of international rights watchdog representatives were too prevented from coming to Azerbaijan for the games. Among these were Amnesty International, Human Rights Watch and The Platform. These institutions were accused of being members of an army of “anti-Azerbaijan” masterminds who want to discredit Azerbaijani glory. As one recent article in a state newspaper puts it: “The whole world is excited about the European Games taking place in Azerbaijan […] unfortunately some foreign organizations, and media establishments under the influence of pro-Armenian circles are casting a shadow on Azerbaijan’s success”.

Discrediting foreign journalists and organizations under the pro-Armenian propaganda flag isn’t new in Azerbaijan. It is an Azerbaijani version of the naming and shaming game. The same can be said about the country’s own critics who, too, are carriers of such shameful acts. Some of them are already behind bars, precisely for their alleged ties with Armenia. Among them is rights activist and government critic Leyla Yunus. Yunus was arrested last year and is charged with high treason, among other things. Her husband, Arif Yunus, a political scientist, is too in pretrial detention, awaiting trial. Journalist Rauf Mirkadirov, who lived and worked prior to his arrest in Turkey’s capital Ankara, but was handed to the Azerbaijani government last year on reasons that remain unknown, has been too in pretrial detention for over a year, charged with high treason. If found guilty, they all are facing life sentences.

The games end on June 28. Another grand ceremony is expected. The surprise guest appearance of another international star is a possibility. After all, a paycheck of $ 2 millions for one song and a short appearance half way around the world isn’t a bad deal. Even if it entails staying inside a hotel room for three days.

But the glory of being a host to major sporting events does not end here. Baku will host the Chess Olympics and the first grand prix race in 2016, Islamiad – a sports competition for Muslim states – in 2017 and four quarter final and group stage games in 2020 as part of the Euro 2020.

So far, the spotlight on the European Games only brought to Azerbaijan negative coverage – against the government’s hopes. And yet, the government remains defiant and determined to continue advancing its image boosting agenda, even if it means continuing to silence critics at home.