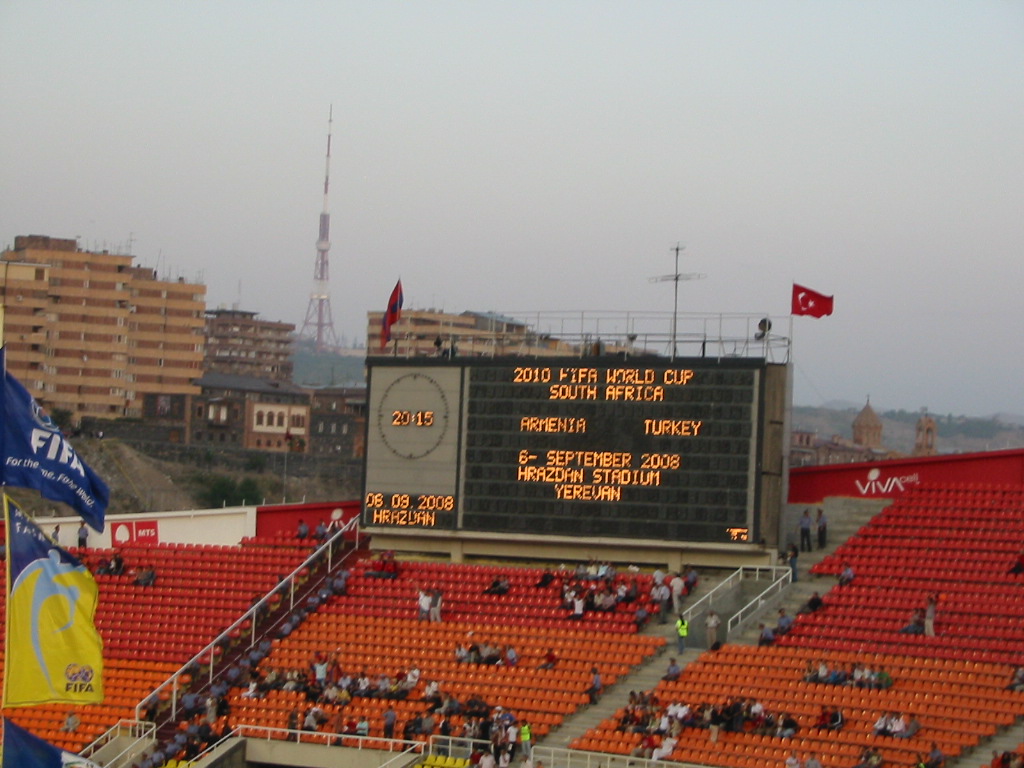 A warm wind blows on Hrazdan stadium in Yerevan. While the two teams on the field play a qualifications match for the World Cup, the presidents of Turkey and Armenia shake each other's hand.

Turkey won the game - the qualifications are for the world championship in South Africa in 2010 - defeating Armenia 2 to 0, but the real game was played in the Tribune d'Honneur where Armenian President Serzh Sarkisian and Turkish President Abdullah Gul watched the game side by side.

The game is of historic importance because the two countries' relations have deteriorated since 1993. Tensions result from the issues of the Armenian genocide (unacknowledged by Turkey) and the war between Armenia and Azerbaijan for the control of Nagorno-Karabakh.

For days, Armenia's capital city, Yerevan, prepared for the event. Police and the army patrolled the city to make sure everything proceeds smoothly for the country's important event. The recent conflict in Georgia reinforced the need to seek new openings in the tight borders around Armenia.

Because of the sealed borders with Turkey and Azerbaijan, Georgia remains Armenia's major trade route. Armenia's international trade vitally depends on one road and railway through Georgia. Both routes suffered damages by Russian bombing and their closure hindered regular trade, above all of gas and oil, causing tension and economic losses.

Only two days before the match, the Turkish President confirmed he would attend. The Armenian government worked vigorously to organize the President's visit, knowing that the relaxation in the relations with Turkey could be an important stimulus for Armenia's economy. At the same time, Turkey is also aware of the importance of regional peace. "A month ago, we witnessed how the unresolved questions in the Caucasus threaten peace in the region", said the Turkish President Gul at a press conference, highlighting the hope that "the game could contribute to eliminating obstacles which prevent the two countries, which share a common history, from coming closer, and to friendship and peace in the region."

Even Armenia's opposition parties, which still dispute the results from the February elections that brought Serzh Sarkisian to power, have cooperated. "A protest has been scheduled for this period," said Stepan Safaryan, secretary of the Heritage party, "but we preferred to step back and allow the dialogue with Turkey. We don't want to hinder this initiative from which we also expect a lot."

The residents of Yerevan were, however, excited and overtaken by contrasting sentiments. Some protestors during the arrival of the Turk President had put up banners demanding acknowledgement of the genocide of the Armenian people. Many were optimistic and honestly hoped for a rapprochement and relaxation of relations. Some feared the arrival of Turkish fans and possible clashes and disorder.

The streets leading to the stadium were closed for traffic beginning in the afternoon before the match. The 62,000 fans patiently walked to the stadium and subjected themselves to the rigorous checks by the police.

Only around a hundred of Turkish fans arrived to watch the game. The banner in their sector conveyed a significant message: "It is time for brotherhood without borders." 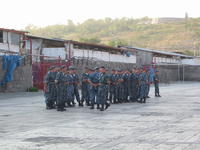 Whistles muzzled the Turkish anthem, but fans and Turkish journalists sang at the top of their lungs. They stayed respectful during the Armenian anthem.

The sports match had little to it. The much superior Turkish team decided the game in the second half with the goals by Tuncay and Semih Senturk.

At the game for peace, presidents Abdullah Gul and Serzh Sarkisian sat close to one another for the first time. The invitation to the Armenian President to watch the rematch Turkey-Armenia on October 14, 2009 opens new horizons, because as Sarkisian said: "We do not want to leave these problems to the next generation."