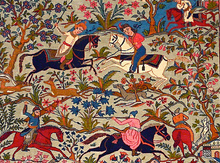 In Azerbaijan, Turkey has always been considered a brother country. In spite of this long-standing friendship, the Azerbaijani government openly expressed its distress about recent signs of rapprochement between Turkey and Armenia

This motto has been taught to every young Azerbaijani since childhood: Turkey has always been and always will be by Azerbaijan's side; we are brother countries; we are a family, etcetera. Turkey has several Turkish schools in Azerbaijan, its channels are broadcast on TV and Azerbaijani people enjoy Turkish music and vote for Turkey in Eurovision contests. Both of the countries share the same religion and similar languages. But how real are these ties between Azerbaijan and Turkey and to what extent are the two governments willing to sustain them, given the recent developments in bilateral relations between Turkey and Armenia?

The initial signs of an eruption

When, in early April, Turkey openly announced its plans to open its border with its eastern neighbour, Armenia, Azerbaijan was furious. A month later, while the fury has somewhat receded, the bitterness and disappointment still linger.

Asim Mollazade, head of the opposition Democratic Reform Party, dismissed claims that normalization of ties between Turkey and Armenia would play well for Azerbaijan-Armenia relations, especially in the context of resolving the Nagorno-Karabakh conflict. He said that Yerevan and Baku were ready for talks and about to reach a possible solution over Nagorno-Karabakh, but as soon as there were signs of a breakthrough in relations with Turkey, negotiations started to drag. However, for Turkey, an open border with Armenia and the normalization of bilateral relations will do no good because Armenia refuses to make any compromise with regard to Turkish denial of Armenian genocide and claims over the territory.

Mollazade is not the only one who thinks that recent rapprochement between Turkey and Armenia will not do any good for Azerbaijan. Mubariz Ahmedoglu of the Center for Political Innovations and Technologies agrees with Mollazade. According to Ahmedoglu, Turkey has, in fact, betrayed the interests of the Azerbaijani and Turkish peoples by embracing the process of normalizing ties with Armenia despite the fact that the cooperation between Azerbaijan and Turkey has always been vital. He said that Azerbaijan had structured its foreign policy in accordance with Turkey's interests and that, officially, Baku had always "refrained from developing relations with Moscow to the fullest extent and did not pursue deep cooperation with Washington precisely because strategic cooperation with Ankara was a kind of beacon, a priority for us."

On a similar note, Parliamentarian Qanira Pashayeva stated that the opening of borders was not only against Azerbaijan's interests, but also against Turkey's. "At the moment, the economic and social situation in Armenia is near total collapse. An opening of the borders would give a definite push towards the development of the Armenian economy. It would also strengthen the country. I hope, Turkey will look into this question with much detail and won't open its border," Pashayeva said.

While betrayal, abandonment by the "big brother," and disappointment have been popular words circulating in Azerbaijani media with regard to Turkey's "behaviour," there have been those who have even gone as far as threatening to ban Turkish music from broadcast on local radio waves. The Executive Director of Baku-based Media FM announced that his radio station "will cease broadcasting Turkish songs if the border between Turkey and Armenia is indeed opened" and urged all other radio stations to join him.

Political analyst Fikret Sadikhov provides a more benign analysis of Turkey's steps toward opening up its borders. "When it comes to the possibility of opening borders, Azerbaijan treats such decisions with grave alarm. Turkey, on the other hand, must weigh all of the possible outcomes that might arise and also not forget about Azerbaijan. We can only hope that Turkey's administration will understand the fragility of the aroused situation and won't step into an uncompromised deal with Armenia."

And while many in Azerbaijan claim that Turkey wouldn't do anything that would be against Azerbaijan's interests, some argue that, in fact, Turkey wouldn't dare to do otherwise. Political analyst Oktay Sadixzade argues that "while on one hand, the trade between Armenia and Turkey already reached $180 million, this is nothing compared to the losses the Turkish economy would have to go through if Azerbaijan cut its gas to Turkey and thus further exacerbated relations between the two governments. Basically, loss of Azerbaijan for Turkey would be very dangerous and these types of steps will only be mistakes."

It is definite that relations between Turkey and Azerbaijan have somewhat deteriorated. In fact, the two countries have never been so close to breaking ties. The Azerbaijani government openly expressed its distress about the recent developments, going so far as to threaten to cut off Azerbaijani gas flows to Turkey.

One thing that is certain for now is that Turkey won't open its borders as long as the conflict over Nagorno-Karabakh remains unresolved. This has been made clear. And yet, the Azebaijani government as well as its people must understand that Turkey, while being Azerbaijan's "brother" nation and a strategic ally, is also an independent country with its own foreign policy.

So far, one of the possible solutions is an alternative discussed widely in Azerbaijan. The so-called 'staged border opening' mentioned by the Deputy Foreign Minister of Azerbaijan Araz Azimov: "...as occupied territories of Azerbaijan make progress and are gradually released from under occupation, there could be a step-by-step opening of roads connecting Turkey and Armenia."

None of the sides - Armenia, Azerbaijan or Turkey - can guarantee whether this could be a possibility as all three are seeking their best interests. Reaching common ground is going to be tough.