Borders closed unless occupation is over 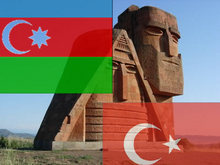 The visit of Turkish Prime Minister Tayyip Erdogan to Azerbaijan healed the wounds opened by the recent Turkish-Armenian rapprochement. Nagorno Karabakh and gas prices were the main issues discussed during the meetings

"Borders remain closed until the occupation is over," stated the Turkish Prime Minister Tayyip Erdogan during his visit to the Azerbaijan capital of Baku on 13 May. The prime minister's visit was the first since Turkey and Armenia agreed on a "road map" for normalizing relations, which Azerbaijan has criticised. In Azerbaijan, the atmosphere has been tense since positive developments in Turkish-Armenian relations. Azerbaijan's stance was clear - only after the Armenian government forces withdraw from the regions of Nagorno Karabakh and surrounding territories, should Turkey normalize its ties with Armenia. The trip was short - arriving on Tuesday evening, the Turkish prime minister was busy the following day. He addressed the national parliament, had a meeting with the president of the Azerbaijan Republic, Ilham Aliyev, and held joint press conference before leaving that same day. So far, his visit seemed to have healed many wounds.

One of the most significant topics of Prime Minister Erdogan's visit in Baku was the issue of steps taken by Turkey to open the Turkish-Armenian border. However, Erdogan, clearly state that the border was closed because of the Nagorno-Karabakh conflict, and that it will remain so until the Azerbaijan government again administers the Armenian-controlled territories. Prime Minister stressed that Turkey had never made any decisions damaging Azerbaijan's national interests and that they do not plan to do so in the future either. The prime minister said in his address to the national parliament, "All the countries in this region know that unless the occupation of Azerbaijani territories is resolved, the desired normalization of relations won't be possible. If there is no progress on the Nagorno-Karabakh problem, it is not possible to have peace in the southern Caucasus."

In his speech, Erdogan underlined the existing cultural and historical ties between the countries. "During the 1920 Bolshevik revolution, Ataturk said: 'Azerbaijan's grief is our sorrow and happiness is our happiness.'"

Before leaving Turkey, in a press statement, Erdogan commented on the current relations between the two countries: "I would like to stress that the strong ties between our countries are backed by sibling-like culture. And I hope that my visit to Azerbaijan will get rid of recent misunderstandings that have been bothering our nations."

In a joint press conference after the two leaders' meeting, the Turkish prime minister commented, "There is a cause and effect relation here. Occupation of Karabakh is the cause and closing of the border is the effect. It is impossible for us to open the border unless that occupation ends." Following Tayyip Erdogan's reassuring statements, the Azerbaijan president, Ilham Aliyev, told the press "Today, I am calling on the Azerbaijani nation to tell them that there is no place left for speculation or doubt anymore."

Aside from Turkish-Armenian-Azerbaijani relations, during his visit, Tayyip Erdogan accompanied by Turkey's energy minister, Taner Yildiz, also underlined the importance of the two countries' economic ties, which include the European Union supported, 7.9 billion-euro Nabucco gas pipeline project planned to open in 2013. The pipeline should reduce Europe's dependence on Russian gas. Once ready, the pipeline will annually carry 30 billion cubic meters of gas from the Caspian and Middle East reserves and thus meet 5% of Europe's demand.

Part of the talks centred on the price Turkey pays for the gas. According to Bulent Alirza, an expert at the International Strategic Research Center in Washington, D.C.; negotiations over price should not be a problem once Turkey and Azerbaijan stabilise their relations. He said in an interview with radio Azadliq, the Azerbaijani language version of Radio Free Europe/Radio Liberty, "The uncertainty in the political sphere has influenced gas talks as well. Prime Minister Erdogan says that the price asked for gas is very high...If political ties become better, then, I think, resolution of this kind of energy problems will be easier as well."

Erdogan's visit attracted many positive comments among local politicians. A parliamentarian, Penah Huseyin, said to journalists waiting outside of the parliament (it was a closed session): "He gave a grand speech." Ali Ahmadov, Deputy of the New Azerbaijan Party (the main government party) said, "The prime minister's address answered all my questions." Similar satisfying comments came from another parliament member, Qanira Pasayeva, who told journalists, "I am content with Tayyip Erdogan's explanations; I hope his statements and his position will find their place in the road map."

In her statement to local media, parliamentarian Gultekin Hajiyeva said, "Even before the prime minister came to Azerbaijan, I never had doubts in Turkey's position towards our country and Armenia. Both the Turkish President Abdullah Gül and Prime Minister Erdogan have said many times that the most important clause in Turkish-Armenian relations was the end of occupation of the Azerbaijan territories."

Now that the tension between Turkey and Azerbaijan seems to be over, Azerbaijan must reconsider its position towards Turkey and Russia. According to political analyst Azer Rasidoglu, the Azerbaijani government must understand Turkey's importance for Azerbaijan, especially given the fact that Turkey is a NATO member. "Turkey's officials stated their position on the border opening a number of times, but Baku refused to listen or accept the facts and decided instead to get close to Russia, turning its back on Turkey and the West. And given the recent events - shooting at the oil academy, murder of the General Rail Rzayev - Azerbaijan should carefully plan its policy with Russia."