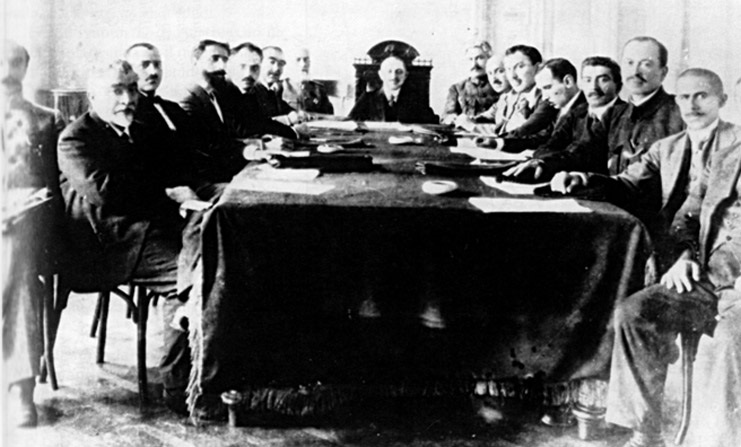 May 28th 1918, the Azerbaijan Democratic Republic (ADR) declared its independence

In May Azerbaijan celebrated the 100th anniversary of its republic. Little is left of the democratic principles that inspired the founding fathers

On May 28th, 1918, Azerbaijan – then known as the Azerbaijan Democratic Republic (ADR) – declared its independence. Its founders, a group of intellectuals once described by Woodrow Wilson as “dignified and interesting” people, hoped to build a liberal, democratic, and free country where both men and women would have equal rights. For its brief existence, that lasted 23 months, the ADR hoped to achieve a truly pluralistic government.

As the country celebrated the 100th anniversary on May 28th, 2018, it took the ruling government less than 23 hours to start a new wave of arrests against the county’s current intellectuals, proponents of the very values the country’s founders had hoped to build the republic on, one hundred years ago.

Crushing the spirit of the ADR

Azer Gasimli is a member of REAL, a political party led by Ilgar Mammadov, who has languished behind bars since 2013. On May 29th, Gasimli was arrested on grounds of resisting the police. In a quick trial, Gasimli was sentenced to 30 days in administrative detention. The following day, standing outside the detention center, Gasimli’s wife Samira desperately tried negotiating with the prison guard to see her husband, but was refused permission. The guard claimed all prison meeting rooms were under construction, but that Gasimli would be allowed a call to his family the next day.

Azerbaijan’s civil society activists believe that detentions and questioning are related to a growing fear within the regime of losing its grip over the people. In an interview with Azadliq Radio, Azerbaijan Service for Radio Free Europe, former political prisoner and veteran journalist Rauf Mirkadirov said that these arrests are part of internal politics. “Authorities want to establish a community that is easy to control. This would explain the new wave of arrests”.

It was not me

Fear of losing its grip over the crowds has forced the local authorities to underreport the turnout at protest rallies organised by the opposition, or have the local state-sponsored media provide diminishing coverage. This time, however, fear has taken a new turn. Rather than saving face following revelations that the government of Azerbaijan paid a number of former MPs at the Parliamentary Assembly of the Council of Europe (PACE) to lobby on its behalf, authorities seem to have decided to use similar accusations against political activists at home, where no one can hold them accountable but themselves. So, on May 26th, a statement by Azerbaijan’s General Prosecutor Office and Ministry of the Interior claimed that the opposition Popular Front Party was involved in a financial fraud for 412,000 dollars.

The authorities claim that these illegal transactions were carried out by a man named Saleh Rustamov. Rustamov is currently in a four-month pretrial detention after being arrested on May 8th and accused of drug trafficking. Rustamov’s nephew, Vidadi, arrested two days after his uncle, is also accused of drug trafficking. The statement issued by the Prosecutor Office and the Ministry claims that Rustamov transferred money to four men, who then transferred the funds to Vidadi, who then transferred them to the three members of the Popular Front to finance their activities.

Rustamov was tortured into signing a confession against the Popular Front Party and its leadership, wrote on her Facebook page investigative journalist Khadija Ismayil. The allegations of torture explain the following arrests of three high profile Popular Front members – Agil Ali Maharram, Babek Hasanov, and Ruslan Nasirli – all sentenced to pretrial detention on charges of appropriation of funds through illegal business and legalisation of appropriated cash acquired through criminal means.

In addition to big party names who took part in the march on May 28th, members of the NIDA civic movement were also invited for questioning. On May 30th, Abulfaz Gurbanli was questioned in the city of Sumgayit, but was released after two hours.

Yet, none of the people who took part in the march to mark the centenary violated any rules – according to Azerbaijan’s constitution, freedom of assembly is guaranteed. And yet, the police prevented the large crowd from marching to the Monument of Independence, located just a few hundred metres from the meeting point.

In response to the arrests, one hundred representatives of Azerbaijan’s civil society – including journalists, lawyers, doctors, and many others – signed an appeal, addressing the Minister of the Interior. “If it is an administrative offense to mark the centenary of the first democratic republic; to walk with Azerbaijan’s three colour national flag; and to remember with respect the great men who founded the Republic, then we call upon you to hold us accountable as well”, read the statement.

The spirit of solidarity is certainly what Azerbaijan’s founders would have been proud to see – alas, not the government reaction. The distaste for the ADR’s legacy is visible not only in the persecution of political activists, but also in the budget allocated to celebrate the day. Marking the birthday of former president Heydar Aliyev in a lavish celebration of “Flower Day”, between 2004 and 2014 alone, local authorities spent 114 million dolars according to some estimates. To mark the legacy of the Republic, the government originally announced it would spend 5 million AZN. The most lavish part of the celebration were fireworks.