Azerbaijan: a circus trial, clowns and a glass cage 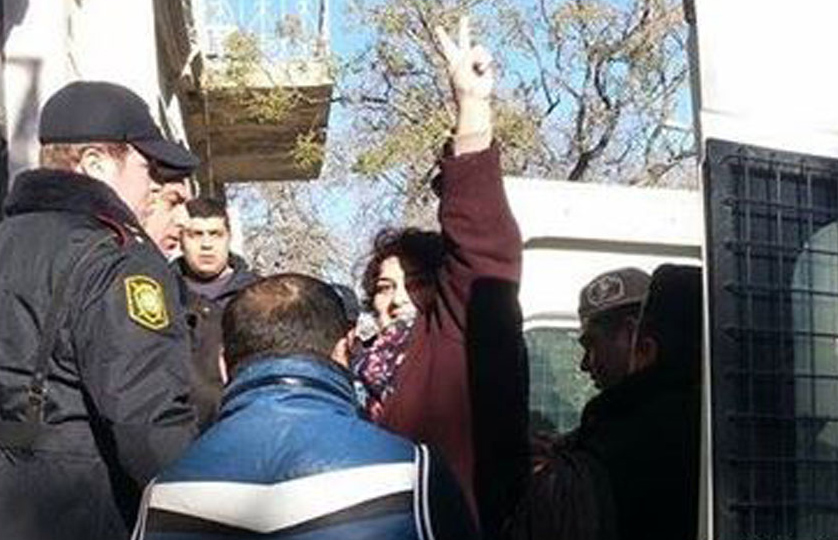 The trial of Khadija Ismayilova, the main investigative Azerbaijani journalists in prison since last December, began last July 24 and may close as early as this week

It is a crowded entrance to the courtroom- journalists, colleagues, friends, observers and family patiently waiting outside, hoping to get in just this time. With the door just barely ajar few men appear sheepishly looking outside overwhelmed by the crowd. Quickly they let someone in, and then inform everyone else waiting outside that the room is full. Frustrated observers yell helplessly but there is no one to answer their questions but a locked metal glass door of the Baku Court for Grave Crimes.

Inside a young woman is brought into the courtroom. She is seated into a glass container, or a “glass cage” as some call it instead. Unlike civilized countries where defendants are allowed to sit next to their lawyers here, the lawyers must raise a motion for this to happen. Welcome to the circus trial of Azerbaijan’s prominent investigative journalist and recipient of a number of international journalism and courage awards, Khadija Ismayil.

For the past five years, Khadija Ismayil uncovered and reported on multi billion worth business dealings of the ruling family of Azerbaijan, the Aliyev clan. From properties in London, Dubai and Czech Republic to ownership and shares in gold mines, telecoms and other ventures, to corruption prevalent on all levels of the government of Azerbaijan- Khadija was able to track down and expose it all through meticulous investigations.

She knew there is a price to pay. After all, she has seen it all during her work as a journalist– murdered colleagues; jailed colleagues; intimidated and beaten colleagues. But as she said in one of her interviews, “keep fighting for human rights, for those who are silenced. If the arrest is the price for it, it is ok, it is worth it”.

The next act involved accusing Khadija of additional charges including fraud, tax evasion, abuse of power and illegal entrepreneurship. Those familiar with the power hungry and abusive authorities in Azerbaijan the next acts were easy to predict. But even the best script writers of Aliyev’s regime were not expecting their first hero to turn on them.

The man named Tural Mustafayev who originally claimed Khadija was directly responsible for his attempted suicide recanted his complain a few months later. Confessing his deed in a video he released in May Mustafayev said he was forced to name Ismayil against his own will. It was not because of Khadija he tried to end his life but because his fiancé at the time wanted to break up with him. “I was forced to write the letter. They [Baku City Prosecutor’s Office] blackmailed me. They said they would release secret camera recordings of my apartment if I didn’t comply […] I want everyone to know that I have no complaints against Khadija.”

Only a few days short of completing her 8th month in pretrial detention, the date for Khadija Ismayil’s first trial was announced –July 24 – the following act in the circus trial. Mustafayev’s confession changed nothing, his requests to remove him from the list of victims was turned down by the presiding judge. And despite various motions raised by the lawyers throughout Khadija’s court, the charges of “incitement to attempt suicide” still stand. And so are all the other charges despite all the evidence presented at the court suggesting otherwise. Since the start of the trial, none of the witnesses testified in court implicated Ismayil in any of the crimes.

Needless to say, they were no relatives of Mrs. Ismayilova but on the call “volunteer observers” who came to courts in return for petty cash. Former political prisoner, journalist Avaz Zeynalli who has been coming to Khadija’s court confirmed these people were indeed there to simply fill out the seats and leave no space for friends, family members, journalists and international observers. “This is not uncommon. Often there is a list of on the call names that are invited when they need to fill out the courtroom. In return they get 5-10manat for the service provided”, said Zeynalli during one of the hearing last week.

From the very start many considered the criminal cases launched against Ismayil and her arrest the result of her journalist work, so did Khadija. On July 24th Ismayil in her defense speech said, “He [President Aliyev] imprisoned me to hinder my journalistic activity and to prevent me from continuing my investigative work”.

Recent wave of arrests and persecutions only suggest that the President Aliyev has grown weary of lengthy trials and wants this to be over as quickly as possible. After all there is more important business to attend to like preparing the country for another series of sporting events and also the country’s next parliamentary elections. This would explain the hasty trial. Ismayil too believes the court is rushing to jail her. “I understand you have been ordered to jail me. You must already know in fact how much you are going to jail me for. You are telling me you are sentencing me for 15 years. I am ready to spend 25 years in jail. But at least let me defend myself using my rights – give me my rights”, said Khadija during the trial last week [August 13].

The final acts of the circus are likely to take place this week. Khadija Ismayil’s trial has begun on August 18. It might as well be her last.