The battle for Yerevan 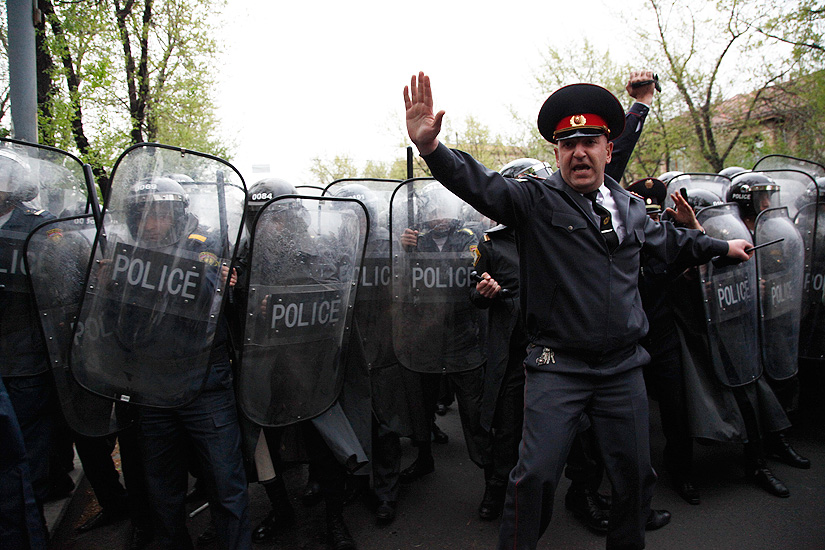 Tensions remain high in Armenia following clashes during the presidential inauguration of April 9. The opposition hopes are for a turning point at the May 5 municipal elections in Yerevan, home to one third of the country's population

As Armenia’s capital Yerevan is getting ready for the municipal elections on May 5 2013, the political situation is showing few signs of cooling off. The crisis that was triggered by the February 18 elections, when opposition leader Raffi Hovannisian refused to accept official election results, continues. While it seems that the opposition has so far failed to mount protests strong enough to force the government to cede to its demands, the opposition is getting ready for a new fight at the municipal elections in the capital.

According to the Armenian law inauguration of the president-elect happens forty days after the elections, which, as elections took place on February 18, meant that April 9 was the date of the inauguration. Hovannisian, who had refused to accept the official results of the elections, which awarded victory to incumbent Sargsyan, had announced that on April 9 there would be an alternative inauguration ceremony. Hovannisian’s supporters called on Armenians to take to the street on April 9 in order to protest what they believed was election fraud and to show that Sargsyan was not a legitimate president. 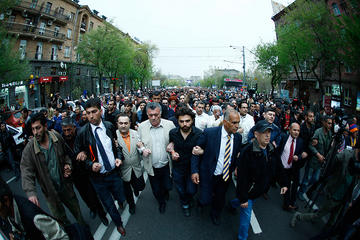 Thus tensions were running high in the days before the inauguration. On April 9 Yerevan reminded a battle ground. Police troops in riot gear were stationed on the major streets, while opposition supporters started gathering from the morning at the Liberty Square in central Yerevan, where Hovannisian’s “inauguration of the New Armenia” was taking place. Many feared the repetition of the tragic events of March 1 2008, when ten people died and dozens were wounded as a result of clashes. However, if the March 1 events of 2008 became one of the most tragic episodes of post-Soviet Armenia’s history, the events of April 9 2013 will probably be remembered as one of the most bizarre episodes of Armenian politics.

While traditionally Armenian presidents’ inauguration is taking place at the Opera House, situated at the Liberty Square, because of the protests, it had been decided that Sargsyan’s inauguration would take place at a concert venue far from the city center. Members of parliament, representing Hovannisian’s “Heritage” party and other opposition parties boycotted the Sargsyan’s inauguration ceremony. Another major parliamentary party “Prosperous Armenia”, did not boycott the inauguration altogether, but its leader Gagik Tsarukyan, was conspicuously absent. This testified to the increasingly isolated position, in which Sargsyan and the ruling Republican Party have found themselves in the aftermath of the February 18 election.

About the same time as Sargsyan was being sworn in as president, Hovannisian read out the text of “the Oath for New Armenia” before his supporters at the Liberty Square. However this was not enough for most protesters, who wanted to march to the Presidential Palace. Hovannisian reluctantly agreed and lead the protesters to Baghramyan street, where most government buildings are situated and which had been sealed off by the police. As clashes between the police and the protesters started breaking out, some activists were detained. Hovannisian entered negotiations with the Chief of the Police, Vladimiar Gasparyan, and suggested a compromise solution: instead of the march towards the Presidential Palace a march to the Memorial of Genocide Victims.

Some protesters followed Hovannisian, escorted by Gasparyan to the Memorial, where the opposition leader and the police chief prayed together. This was probably the most Kafkaesque moment of the day, especially since at the same time in another part of town tension was growing between the police and those protesters who refused to leave Baghramyan street. The stand-off with the police was getting tenser, but the arrival of Hovannisian and Gasparyan helped to diffuse the tension and finally, already late at night, remaining protesters were allowed to march towards the Presidential Palace. However, by that time many protesters, especially those with more radical views, had left the stage of the rally, disappointed with what they saw as Hovannisian’s lack of decisiveness.

First we take Yerevan, then… 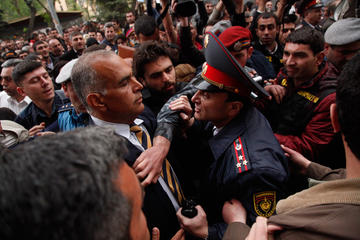 Thus, the events of April 9 not only dealt a blow to the legitimacy of Sargsyan as incumbent president, but also somewhat undermined the image of Hovannisian as the frontrunner of the opposition. He came under criticism from various figures in the opposition camp, who accuse him of inefficient leadership. Hovannisian’s supporters retorted that at least Hovannisian managed to avoid major clashes and bloodletting. In any case, it may be hard to assess the real outcomes of April 9 at this point. Civic activist Arsen Kharatyan, who took part in the demonstrations, agrees that there were certain issues regarding the organization of the protests. However, he believes it is important that large-scale violence was averted, especially given the fact that Armenian society still has not fully recovered from the shock of the tragedy of March 1 2008.

While some opposition supporters may agree that they have lost a battle on April 9, they still hope that the municipal elections in Yerevan on May 5 will become a turning point. Voters in Yerevan, which is home to one third of Armenia’s population, will be electing the Council of Elderly of Yerevan, which in turn would choose the mayor. Six parties and one electoral block have put forward their electoral lists. A victory for the opposition in the municipal elections could change the overall balance of power in the country, breaking the monopoly on power which the Republican Party and its allies have held for about 15 years. In their campaign Hovannisian’s “Hello Yerevan” electoral coalition stresses that the municipal elections are the continuation of the presidential campaign and calls on those voters who supported Hovannisian not to lose hope in the final victory.

However, the opposition may face serious difficulties in these elections. The ruling Republican Party is betting on the young mayor of Yerevan Taron Margaryan, who is not associated with the much hated old guard of the party and the “oligarchs”. There is also little doubt that the so-called administrative resource, i.e. the government structures, will be used to provide the necessary number of votes for the ruling party. Another factor, which may influence the election result, is the failure of the opposition to unite. Opposition parties Armenian National Congress and Dashnaktsutyun, who avoided participation in the presidential elections, will be taking part in the municipal election, as well as “Prosperous Party”, which prefers to call itself “alternative to the government” rather than opposition.

As a result, the pro-opposition vote may be split between these parties, allowing the ruling Republicans to take control of the Council of the Elderly. On the other hand, as supporters of these parties argue, the participation of various opposition forces might make it more difficult for the pro-government to try to falsify the election results. In any case, the municipal elections on May 5 may become instrumental for shaping the political landscape of Armenia in the years to come.