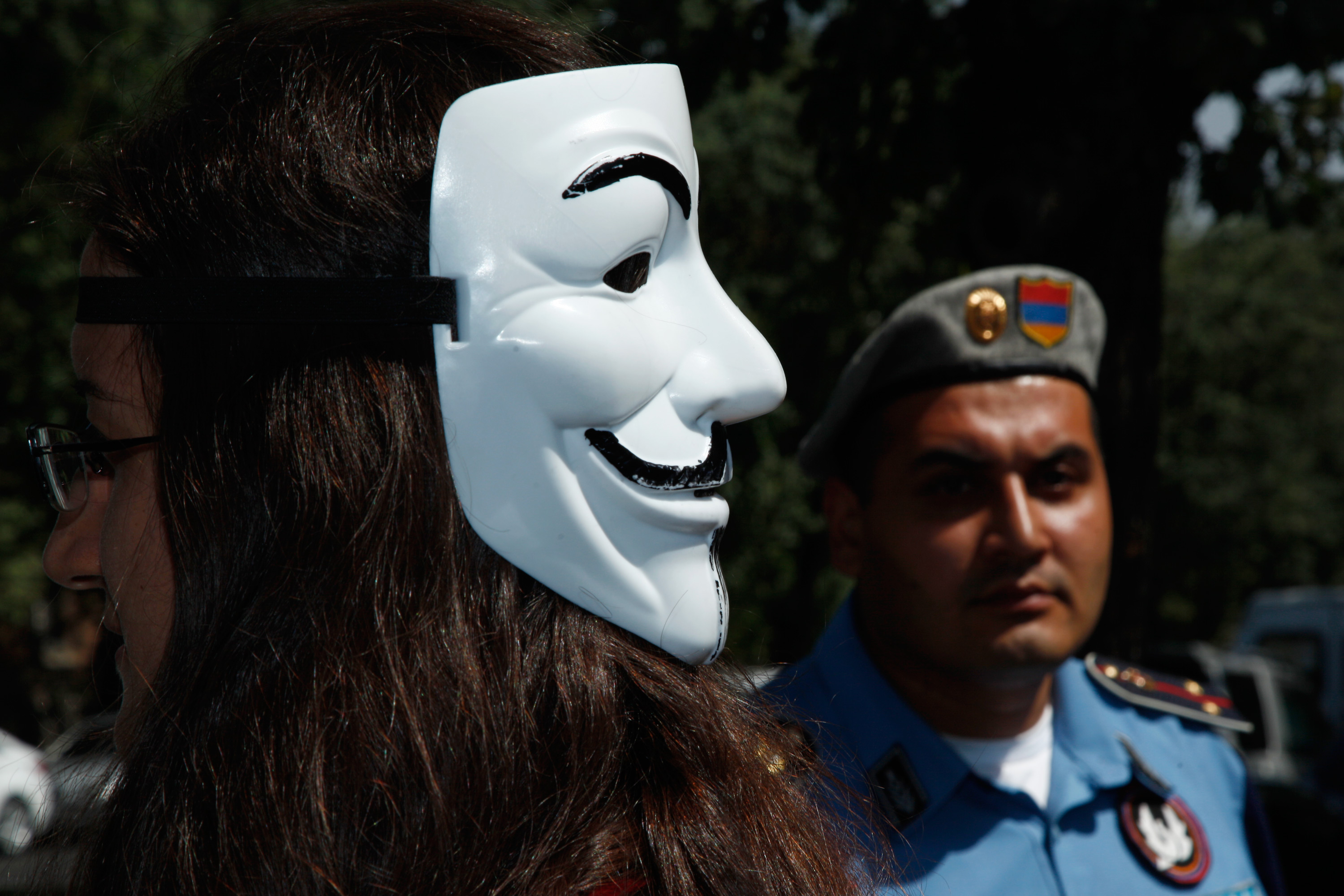 Protests at the residence of the Armenian President, September 4 (PanARMENIAN Photo_ Tigran Mehrabyan)

A Customs Union with Russia, Belorus and Kazakhstan turns Yerevan away from signing an Association Agreement with Brussels. While the Armenian public opinion is divided, civil society activists have been intimdated

On September 21 Armenia celebrated its 22nd day of independence. Along with celebrations in various parts of the Armenian capital, a very different kind of demonstration took place in central Yerevan. Civic activists had called a march to protest what they saw as a threat to Armenian sovereignity. This was one of the several protests that took place after Armenian president Serzh Sargsyan announced in Moscow on September 3 that Armenia would be joining Customs Union with Russia, Belorus and Kazakhstan.

Serzh Sargsyan's announcement came as a surprise not only to most Armenians but also to EU's foreign policy representatives. Several years’ negotiations between Armenia and EU on signing Association agreement had been concluded and Armenia was expected to pre-sign the agreement in November. The most essential element of the Association agreement is the establishment of Deep and Comprehensive Free Trade Area (DCFTA), which is incompatible with Armenia's membership in the Customs Union, as EU officials had warned on several occasions.

Armenian officials seemed to be aware of that. Thus, in a TV interview given this spring, Sargsyan unequivocally ruled out the perspective of Armenia's participation in the Customs Union. However, after the Moscow statement, Armenian officials were trying to convince the EU to sign the Association agreement without the trade provisions. This, however, would make the Association agreement an almost symbolic gesture, devoid of any practical significance. Therefore, the EU officials sent out a clear signal that they would not consider this option. The Moscow statement also led to a complete reversal in the rhetoric of the Armenian government: officials are praising the Customs Union and declaring that Armenia has always had the long-term goal of joining it and it was simply waiting for approval from Customs Union members. However, European officials also seem to see the Russian shadow behind the abrupt U-turn in Armenia's policies.

A struggle for influence

Armenia seems to be caught up in the struggle for influence between EU and Russia. The field of struggle is the region covered by the EU’s «Eastern Partnership» program (EaP): Ukraine, Moldova, Belorus, Armenia, Georgia, Azerbaijan. The big prize in this struggle is Ukraine. Russia, which sees Eastern Partnership as a part of EU's expansive strategy, has been trying to persuade Ukraine to join the Customs Union, rather than sign the Association agreement. Some commentators believe that the statement regarding Armenia's inclusion into the Customs Union, was supposed to send a signal to other EaP states , most of all Ukraine. If it was, however, it backfired, as not only Ukraine, but also Moldova and Georgia announced that they would definitely continue the process of Association Agreement with EU, including the DCFTA.

In any case, Armenian government's credibility suffered a serious blow, first of all in the eyes of the European partners. EU enlargement commissioner Štefan Füle, who recently visited Yerevan, lamented the lack of trust and confidence in relations with Armenian government . Russian government, however, also seems to be disappointed by what it sees as Armenia's attempts to forge relations with EU behind its back. Many commentators pointed out, that contrary to expectations, no high-ranking Russian officials, were present at the inauguration of the newly-built enormous Armenian cathedral in Moscow on September 17, which was attended by Armenia's president.

The reaction in Armenia itself has been mixed. Political forces, wary of spoiling relations with Russia, which could damage their chances of coming to power one day, tried to refrain from criticizing openly the Customs Union. Certain opposition forces, like the Armenian National Congress, however, criticized Sargsyan's government for its way of handling the issue, which has led to a loss of credibility both with Europeans and Russians. The decision to advance integration with Russia may also be popular with many Armenians, especially those of middle or senior age, who, having grown up in the USSR, have a strong emotional connection to Russia. Besides, a smear campaign, orchestrated by a previously unknown organization called “Armenian Parents’ Committee”, which aimed at discrediting European values by equating them with sexual promiscuity, might have further damaged the image of EU in the eyes of many ordinary Armenians, who are known to be conservative on social issues .

Civil society organizations, however, namely those that have been involved in EU-backed democratization efforts, have been more vocal in their criticism of the government's conduct . The way the decision was taken, without any public discussion or consultations, under obvious foreign pressure, is what most alarmed its critics, who fear that, as a result of Sargsyan’s policies, Armenia is losing the capacity to act as an independent player in international affairs. Various groups of civic activists, using Facebook, organized protests against the president’s decision. Two of these activists, Haykak Arshamyan and Suren Saghatelyan, were severely beaten after one of these protests on September 5. “A gang of six or seven people, all well-built, in black T-shirts, ambushed us near my home, in the darkness” says Haykak Arshamyan. The attack followed a series of similar attacks on other civic activists, who had taken part in other protests, though these protests were related to local issues rather than foreign policy. The police has failed to find the attackers so far. Arshamyan believes the aim of the attacks was to intimidate activists and prevent them from protesting. “This tactic may work with some people”, he says, “but it won’t work with others: activists will only become more determined”.

The protests, as well as attacks against activists that follow them, may be a sign of a coming instability. While the majority of Armenians are largely unaware of the intricacies of the European integration or Customs Union, they are immediately affected by social issues. The rise in the prices of Russian gas this spring has led to a chain reaction, as prices for various products and services started growing. Attempts of Yerevan city authorities to raise the prices for public transportation triggered a civil disobedience campaign, when mostly young activists refused to pay the new fee and staged sporadic protests. City authorities eventually backed down and re-introduced the old fee, but they are planning to raise the prices in autumn. Armenian universities have decided to raise their fees as well, which also promises headaches to the authorities, as student activists are vowing to protest this decision. Veterans of the war in Karabakh, unhappy with the size of their pensions, are also protesting. All this means that Armenia may be heading into a rough ride this autumn, and that makes Armenian government extremely weak, given the intensity of the pressures coming both from inside and outside of the country.