Concerns raised over extension of Russian military presence in Armenia 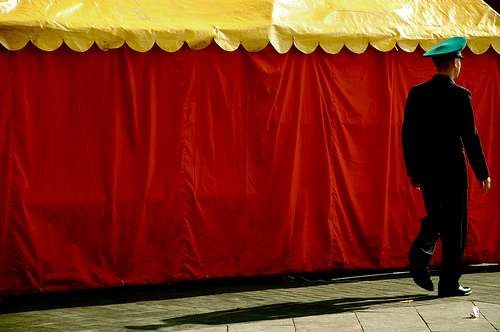 The reactions to the signing of the August 20 deal between Russian president Dimitry Medvedev and his Armenian counterpart, Serge Sargsyan, extending Moscow's military presence in its former satellite by more than two decades. The internal and regional scenario, the consequences for the Karabakh conflict

Three days before Armenia celebrated the 20th anniversary of the adoption of its declaration of independence from the former Soviet Union, Russian president Dimitry Medvedev signed a deal with his Armenian counterpart, Serge Sargsyan, extending Moscow's military presence in its former satellite by more than two decades. While official Yerevan touted the agreement as a success, opposition groups and some analysts instead voiced concern.

From the outset, the pact, signed on the eve of an informal meeting of the Collective Security Treaty Organization (CSTO) in Yerevan, seemed more like an official state visit. Huge Russian flags were hung out in the center of the Armenian capital next to similarly sized Armenian ones. Indeed, as Russia's only reliable ally in the South Caucasus, such a reception was perhaps natural, especially as Federal Border Guards guard Armenia's border with Turkey and Iran.

Russia's lease of its main military base in Gyumri, Armenia's second largest city, had been due to expire in 2020, but has now been extended to 2044. The Armenian government says the new deal guarantees the country's security and makes the possibility of a new war with Azerbaijan over the disputed territory of Nagorno Karabakh unlikely. Others, however, disagree, considering that it might instead confine the conflict to within Azerbaijan.

Such concerns are amplified, they say, by so far unconfirmed reports that Russia will sell S-300 missile systems to Azerbaijan, something that Moscow has not yet denied. “The acquisition [...] will limit Armenian armed forces’ ability to repel a large-scale Azerbaijani attack,” the extra-parliamentary opposition's Levon Zurabyan told RFE/RL’s Armenian service. […] this […] can only localize a military confrontation. [...] such a war would be “devastating” [...]”

Criticism of the deal was even harsher from Armenia's first foreign minister, Raffi Hovannisyan, now chair of the parliamentary opposition Heritage party.

“While Yerevan’s “strategic” relationship with Moscow continues to serve as the bedrock for regional peace and security, the nature of the Armenian-Russian embrace is unduly lopsided. The asymmetry of the Russian-Armenian relationship is most manifest in the fundamental lack of equal and mutually respectful cooperation,” he wrote in an open opinion piece published on many Internet sites.

Hovannisyan also criticized other aspects of the agreement, and particularly the fact that the previous 1995 pact could have been extended for another five years when it expired in 2020. Moreover, Armenia does not receive financial compensation for the base. “Such a mortgaging of Armenian national security is unacceptable and demands immediate redress,” he stated.

Armenian-American regional analyst and Director of the Armenian Center for National and International Studies Richard Giragosyan agrees. “This is the only base outside of the Russian Federation where the local host country has to pay for all of its costs. Kyrgyzstan receives millions of dollars from Moscow for the base there. Second, in military terms, there is little to benefit Armenia and suggests a “colonial approach” by Russia,” he told Osservatorio.

“Even Russian Foreign Minister Sergei Lavrov confirmed that the mission and mandate of the Russian base will not change in terms of any significant military capability,” Giragosyan says. “There are serious signs of this lack of respect, most obviously over Russia’s consideration of selling new weapons systems to Azerbaijan and its strategic takeover of key sectors of the Armenian economy, including acquisition of the energy sector and much of transport.

“These are strategic areas where no foreign country, no matter how friendly, should be allowed to dominate, especially for a small, landlocked country like Armenia that is still under threat form its neighbors. The stakes are simply too high for Armenia to trust too blindly in Russia’s vague promises of support and unfulfilled expectations of partnership.”

Yet, although Lavrov has said there will be no actual change in the mandate for the base, the Armenian government claims the opposite. Official Baku is already seeking assurances that Russian forces will not be used against Azerbaijan in the event of renewed hostilities. The spokesperson for the ruling Republican Party therefore accuses critics of populism and seeking to exploit concerns for internal political gain.

“This will rule out a military solution to the Karabakh conflict. That is important not only for the Republic of Armenia but also long-term peace and stability in the region,” Eduard Sharmazanov remarked.

This view is also supported by others such as Andrei and Dimitri Trenin from the Carnegie Moscow Center. “By expanding its guarantees to Armenia and extending the treaty's term, Moscow has given a warning to Baku to drop war as an instrument of policy,” they wrote in an opinion piece published by RFE/RL. “Now it needs to make another step, by producing incentives for both Armenia and Azerbaijan to reach a peace deal.”

But, in an interview with Yerevan bureau for the Prague-based radio station, prominent academic Gerard Libaridyan disagrees with both reactions.

“The 1995 treaty has a provision, which I’m sure will remain in the new one, that if there are military hostilities within Armenia’s borders Russian won’t automatically come to [Armenia’s] aid,” he said. “In the case of Azerbaijan, I’m not sure that Russia would come to Armenia’s aid because I’m sure that Azerbaijan would not launch such an attack without Moscow's tacit or vocal consent.”

Although others are unlikely to share the same opinion, the former foreign policy advisor to the country's first president, Levon Ter-Petrosyan, also added that the latest developments in relations with Russia, ahead of Medvedev's visit to Baku, instead highlights Armenia's “failure to make peace with Azerbaijan and Turkey.”