Armenian Spring in the Making? 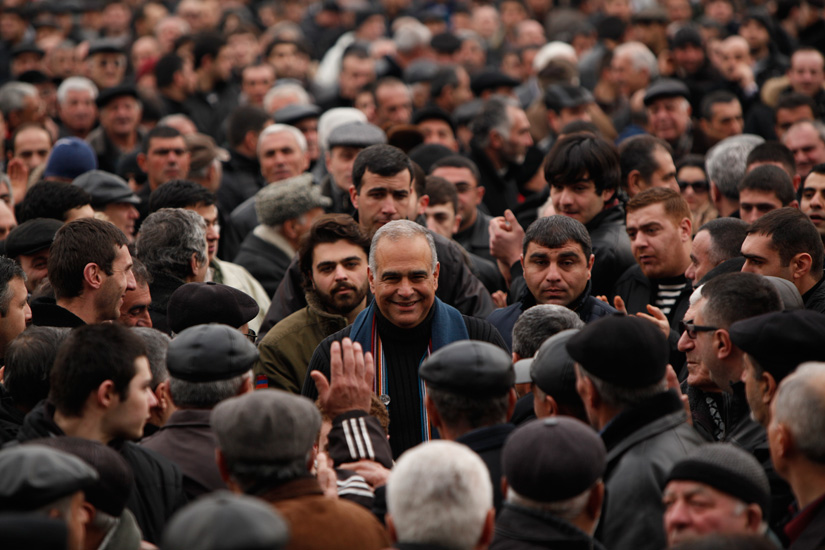 Opposition refuses to accept the official results of the Presidential election, as former Foreign Minister Raffi Hovannisian announces the “Revolution of Hello”

There were few surprises expected in the presidential elections on February 18, 2013 in Armenia. Analysts, politicians and journalists seemed to agree that the incumbent Sargsyan was set to win a victory with a comfortable margin. The main political rivals of the ruling Republican party, including three of the five political parties represented in the parliament refrained from taking part in the elections . As for those opposition leaders who were running in the elections, including the former minister of foreign affairs, Raffi Hovannisian, few observers viewed them as serious challengers. Hovannisian, US born diaspora Armenian, who repatriated in early 1990s, distinguished himself with an innovative campaigning strategy, going door to door, greeting people and talking to them. However, he was not backed by strong party machine, and some commentators ridiculed his way of campaigning as imitation of Western political technologies, unsuitable for Armenia’s post-Soviet realities. There were some incidents during the campaign, such as unsuccessful assassination attempt against one of the candidates, former Soviet dissident Paruyr Hayrikyan, but in general the campaign seemed to mostly calm and even boring.

Thus, the election outcomes came as a surprise for many. Official results awarded victory to incumbent president Sargsyan, with over 58 % of the votes, while Hovannisian received just under 37 %. This is quite an impressive result for opposition in a post-Soviet country: in neighboring Azerbaijan incumbent Aliev received 87 % of the votes in 2008. Another impressive achievement for Hovannisian: official results acknowledged that he won several major towns, including Armenia’s second largest city Gyumri. However, his supporters believe that the actual number of votes he received was much higher. Hovannisian refused to accept the official results, proclaimed himself the winner and called on his supporters to go out on the streets.

Of course, it is hard to assess the veracity of Hovannisian’s claims at this point. In any case, the level of trust towards elections in Armenian society is extremely low. Previous elections in Armenia have been marred by claims of fraud and massive post-election protests suppressed by force. The latest protests lead to a violent government crackdown on March 1 2008, which left ten people dead, as dozens were injured and arrested.

A ballot for breakfast

As a reflection of this atmosphere of mistrust, thousands of voters spoilt their ballots on February 18. Sometimes, the ways of expressing protest were quite bizarre. Some disillusioned young citizens “voted” for pop-culture heroes, e.g. vintage blockbusters star Chuck Norris or reality TV diva Kim Kardashyan (who happens to be ethnic Armenian). One disgruntled voter ate his ballot at the polling station, explaining that “it is easier to swallow a piece of paper than to digest five more years of the regime”. A group of activists expressed their protest by dancing to global YouTube hit “Gangnam Style” in front of the Central Election Commission office. After the official results came, social networks like Facebook were full of accusations of fraud on specific polling stations, coming mostly from people who served as election committee members, proxies or monitors.

Hovannisian held several successive rallies at the Freedom Square in central Yerevan and in the regions of Armenia, attended by thousands of people. He was joined by several important figures who supported his claims, including not only politicians, but also one of Armenia’s most famous singer/songwriters Ruben Hakhverdyan. Hovannisian met with president Sargsyan in his office on February 21 in order to negotiate a way out of the political crisis, a step was criticized by hard-line opposition supporters. However, the two politicians failed to reach a compromise and Hovannisian continues to hold rallies both in Yerevan and in the regions of Armenia. Hovannisian even went as far as to claim that the movement represented a peaceful revolution, and even coined a name for it, “revolution of hello”, hinting at his pre-election campaign strategy.

In spite of all that, the assessment of elections by the international community has been mostly positive, albeit with some criticism: Sargsyan has already received congratulations upon his re-election, not only from Putin, Ahmadinejad and several post-Soviet leaders, but also from western governments including those of France and Italy. Representatives of EU and US State Department gave generally positive assessments, while criticizing some aspects of the elections. This assessment was probably based on the OSCE monitoring mission’s statement praised the elections as “well administered… with respect for fundamental freedoms”, but criticized the lack of competition and misuse of “administrative resource” by the government. As Armenian analyst Samvel Martirosyan says, the monitors’ report seems to have been written before the voting day: thus, they criticized the elections for being non-competitive, while in the light of the election results and post-election developments this assessment seems somewhat premature. In the past international monitors have been accused of stamping positive assessments on rather dubious elections, which has diminished the trust towards them among many Armenians. This mistrust was manifested by young activists who attempted to disrupt the observers’ press conference on February 19th and demonstrated in front of the OSCE/ODIHR observing mission office on the following days.

It seems that the pro-government camp was not quite ready for the post-election developments. Analyst Gegham Baghdasaryan says the government thought everything was under control during the election campaign: “while previous president Robert Kocharyan was outright authoritarian, Sargsyan experimented with allowing more media freedom and freedom of assembly, thinking that the government still had ways to control the situation… however, reality turned out more complicated”. Even though opposition heavy-weights like Armenia’s first president Levon Ter-Petrosyan were not running, the elections proved that there is a substantial anti-government electorate in Armenia, which is ready to mobilize around new leaders. Ironically, the fact that several opposition parties stayed out of the elections, proved unfortunate from the government’s point of view, since it allowed the opposition electorate to consolidate around a single candidate.

The government and police response

In any case the government response to the protests has so far been quite reserved, compared with post-Soviet standards, as well as Armenia’s previous experience. Of course, some ruling party members’ comments were patronizing and dismissive, and sometimes outright insulting. Thus, social networks fumed over comments by a ruling party MP Hayk Babukhanyan, who said that “only homosexuals, heretics and simply non-conscious people voted for Hovannisian”. However, such comments have so far been voiced by secondary representatives of the ruling party, while major figures have either stayed silent, or remained relatively respectful in their words. When it comes to handling the protests, Armenian police has so far been more professional and less heavy-handed, especially compared to the events of 2008.

At this point it is hard to predict which way the developments in Armenia would swing. On the one hand, it seems that the protesters do not have a clear strategy. Hovannisian has vowed to struggle until the end, using peaceful methods. It is not quite clear, however, what methods of peaceful struggle can be used, except for rallies, which, as experience shows, tend to exhaust themselves as the time goes by. The incumbent government has received statements of supports from both East and West, while international media seems quite indifferent to developments in Armenia. On the other hand, it is also clear that mobilization of the sort that is taking place in Armenia itself would not simply fade away. Cracks may start appearing in the government camp if the movement continues to grow wider. As one opposition supporter said “they [i.e. the government] owe us a spring, and we will take it, one way or another”.