Armenia: elections without a choice 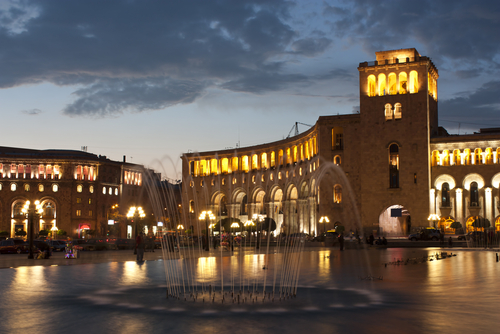 A deep economic crisis and complicated regional scenario will seemingly not stop the incumbent, Serzh Sargsyan, to be elected for a new term as Armenian president

On February 18, 2013 Armenia is going to hold a presidential election. The answer to the most important question that arises with every election is already clear: the incumbent president Serzh Sargsyan looks set to win the election, as no other candidates can credibly be expected to win the elections, or at least make it into a run-off. The campaign, however, raises a question, which both Armenian and external observers find difficult to answer. In most European countries, governments that had seen their economies suffer as a result of an economic crisis, were defeated in elections during the recent years. How is possible that in Armenia, one of the hardest hit countries, the incumbent government is expected to win with a landslide? Moreover, an incumbent president whose first election was marred by allegations of fraud and mass protests is today facing virtually no competition. All of this would be easy to explain in a country with an authoritarian dictatorship, however, Armenia’s political system, though hardly a functioning democracy, can also hardly be described as a brutal dictatorship.

The current situation, in which incumbent president’s victory looks quite secure, is especially astonishing, if one looks at how complicated both internal and external situation of Armenia is today. The economy has been hit hard by the economic crisis, and today many Armenians are looking for work abroad. The already complicated external settings have become even more complicated during the last years. The attempt at Armenian-Turkish reconciliation which was launched in 2008 with support of USA and EU has collapsed: the Armenian-Turkish protocols signed in 2009 are virtually dead. While not long ago mediators were talking about “windows of opportunity” in Armenian-Azerbaijani negotiations over Karabakh conflict resolution, today this process also looks frozen. Moreover, in late August, Ramil Safarov, an Azerbaijani military man serving sentence in Hungarian jail for murdering an Armenian officer, was extradited to Azerbaijan, where he was not only released, but also treated as a national hero and the ensuing diplomatic scandal marked probably the lowest point in Armenian-Azerbaijani relations since the ceasefire in 1994. The Safarov affair and constant skirmishes on the line of contact of Armenian and Azerbaijani forces should serve as a warning of how close the sides have come to an open military confrontation. When it comes to relations with global and regional powers, Armenian government has to balance its European aspirations and its cooperation with European Union in the framework of programs such as the Eastern Partnership, and the military-political alliance with Russia, a task that often seems virtually impossible.

However, while Armenia is facing so many difficult issues, there is surprisingly little discussion on how to deal with them in Armenian society in the run-up to the elections. Most discussions during the months preceding the elections focused rather on who the potential candidates would be. The reason for that was the fact that two of the candidates considered the most probable competitors to incumbent Sargsyan, hesitated for a long time. Until December it was not clear whether Armenia’s 1st president and leader of the opposition block “Armenian National Congress” Levon Ter-Petrosyan, and one of Armenia’s most wealthy man, the leader of semi-opposition Prosperous Armenia Party, Gagik Tsarukyan, would stand in the elections. Eventually both of them decided to abstain from nominating their candidacies.

So why did the candidates that had the most chances to become a serious challenger to incumbent Sargsyan decide to skip the fight? Most probably, Ter-Petrosyan’s decision not to take part in the election was a reaction to the developments that took place within the last year, which showed that he does not have high chances if he runs for president. In parliamentary elections in May 2012 Ter-Petrosyan’s ANC received only 7 % of the votes. Apparently, ANC which had been a rising force after 2008 elections, has been outmaneuvered by the incumbent government, and today is standing at the brink of a break-up. On the contrary, Prosperous Armenia (PA), which until recently has been a part of the ruling coalition, did quite well in the parliamentary elections. It was able to exploit its position of a party that has left the ruling coalition and yet has not declared itself opposition, refraining from openly criticizing the incumbent government. However, such a position cannot be maintained for a long time. The decision to challenge Sargsyan in the presidential election would have meant openly joining the opposition camp, which in Armenia, as in other post-Soviet countries, is associated with many risks. Many prominent members of Prosperous Armenia, including its leader Gagik Tsarukyan, are wealthy people with a lot to lose, who are not ready to risk their property for the sake of politics. Criminal persecution with charges of embezzlement, which started against a prominent PA member, former minister of foreign affairs and another potential presidential candidate Vartan Oskanian, showed to PA members what they could expect in case the party decides to become a genuine opposition force.

Thus, in the absence of serious challengers, Armenia’s voters will be presented with a somewhat bizarre list of candidates, which includes 8 names, most of them having few chances of receiving more than 1 or 2 % of the votes. Probably, the most exotic is Vartan Sedrakyan, a self-proclaimed “eposologist” (i.e. a researcher of epic folklore, the term makes as little sense in Armenian as it does in English). He succeeded in attracting some attention by his statement that he will use Armenian folklore epic “Sasuntsi David” as his political program and with his election motto “there is God above”. Most other candidates are less eccentric, but their chances of succeeding are not much higher.

There are, however, two candidates, former prime-minister Hrant Bagratyan and former minister of foreign affairs Raffi Hovannisian, who may leave their mark on the elections. Even though neither of them has any realistic chances of beating the incumbent, they both have the opportunity to gain a significant percentage of votes. The significance of these votes is that they can serve as a basis for consolidating the opposition in the future. It is obvious that even though Serzh Sargsyan is the most probable winner of these elections, there is a lot of discontent in the country, and whoever is able to position himself as the main challenger to Sargsyan in these elections, will be able to capitalize on that discontent in the coming years.

These two candidates, however, have their own limitations. Bagratyan is often associated with the questionable economic policies of the early 1990s, which means that he is deeply unpopular with some voters, especially those of older and middle age. Another factor unfavorable for Bagratyan is that the Armenian National Congress, of which Bagratyan is still formally a member, is not supporting his candidacy, and is calling for a boycott of elections. Hovannisian, an American born Diaspora Armenian, who decided to move to Armenia in 1991, enjoys a reputation of a patriot and someone who does not share the corrupt and cynical style typical for post-Soviet politicians. However, to some Armenian voters his western background may seem as a handicap, since he is often seen as out of touch with realities on the ground. Hovannisian’s political reputation recently suffered as a result of unsuccessful attempt of alliance between his party “Heritage” and another party “Free Democrats”. While the alliance did make it into parliament as a result of 2012 parliamentary elections, many prominent “Heritage” members were left out. As a result, the alliance is de facto non-existent and “Free democrats” are not even supporting Hovannisian’s candidacy in these elections.

Thus, the incumbent political force has today found itself in a situation, in which its domination over Armenia’s political life, which seemed so endangered only a couple of years ago, is today unchallenged. Old opposition has been fragmented and sidelined, new opposition has not emerged. However, what seems a short-term victory for the ruling elite may yet lead to trouble in the long run. It is obvious for both Armenians and international community, that the election will be one without a real choice. The incumbent government has been haunted by a lack of legitimacy in the eyes of a large part of the Armenian society after the disputed election of 2008, which lead to mass protests that were violently suppressed. These elections, even though they most probably will award a victory to the incumbent, will hardly solve the issue of the alienation between the government and the society. Serzh Sargsyan said in his inauguration speech in 2008 that he would try to break the wall of misunderstanding between the government and some of Armenian citizens. While the upcoming elections look set to award him a second term, they would hardly help him to break that wall.