Restless Armenia: before and beyond Electric Yerevan 22/10/2015 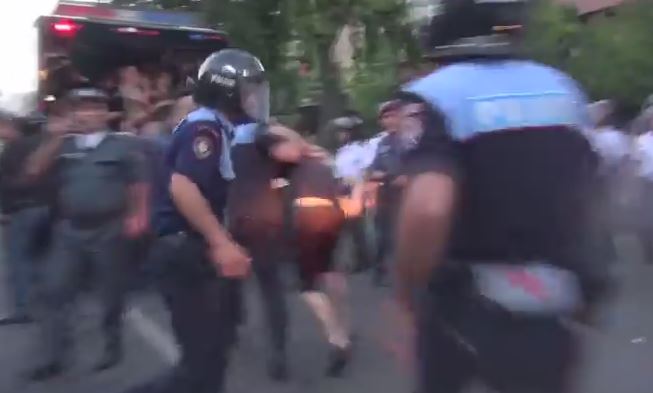 A rally in the Armenian capital against yet another electricity price increase triggers the police. Beatings, insults, and even violence against journalists

Journalists and camera people were arrested, abused, and beaten, their materials seized and destroyed. It happened a few days ago in Yerevan, where the media present were targeted for covering the violent eviction of Baghramyan street, near the residence of President Serj Sargsyan. The attempt to put a gag on them, to prevent them from telling about the police's many acts of violence against demonstrators, was however unsuccessful. The repression took place at dawn and hit hard on the many demonstrators performing a sit-in, with 237 arrests and dozens of injured, many requiring hospitalization.

All this did not, however, stop civil society. The protest, started on June 19th after yet another increase in the price of electricity (the third in the last two years), has been going on day and night without interruption.

In the background of a crippled country, where poverty and unemployment affect many people – especially the young – on a daily basis, youths are the real stars of this festive, peaceful protest, that the media renamed Electric Yerevan. Despite various attempts to manipulate the protest, especially by the foreign press, social and economic reasons outweigh political implications at the national and international level, which exist, but remain in the background. Let us look in detail at what happened last Tuesday morning, when the police resorted to the iron fist to try to end the protest.

The testimony of journalists

We are told what happened by Tehmine Yenoqyan, a journalist for the information site Lragir.am. Tehmine has become a symbol of Electric Yerevan thanks to a video of the protest, the most popular with over 240,000 views so far. In the footage, the young journalist bravely documents the arrests and violence by police and plain-clothes agents and proudly resists to numerous assaults, finding the strength to resist and fight back. "On June 23rd, at about 9.30 am, the police kicked off a special operation against the peaceful demonstration in Baghramyan in Yerevan, making use of water cannons, batons, and shields. No violence or provocation against the police had taken place: people were sitting on the asphalt road in a peaceful act of civil disobedience. The brutal police raid was not caused by any illegal or violent act by demonstrators".

Tehmine tells us about those hectic hours: "From the start I was harassed by police officers trying to disturb my work, take my camera, and plug the lens with their hands. They pushed me and grabbed my hands too, but I managed to escape and keep my camera running. I filmed scenes of arrests and brutality, humiliation and beating of citizens by the police. A taxi driver helped me run away and took me home. Not all of my colleagues were so lucky: most of them had their cameras broken by the police, some were brutally beaten and traumatized, many were hospitalized. The police were eager to shatter cameras and destroy the memory cards to erase all traces of the events. They harassed me and shouted obscene insults against me. I will take them to court, since I recorded the words and faces of those who attacked me".

Gevorg Ghazaryan, an Armenian public TV journalist covering the protest as a freelance photographer, was another victim of that morning. The story of Gevorg, who is still struggling to speak because of the beatings, is no less impressive. It also happened at dawn on June 23rd, in the frantic moments of the police offensive against unarmed demonstrators: "At one time there was a girl lying on the ground, begging the police to stop beating her. The officer insulted her, called her a whore. I told him to stop to kicking her. Meanwhile, another officer arrived and gave the order to take us away. A group of special forces came and loaded us into cars. I was taken away from there and the officers started to beat me. There were least five against me. One of them hit me in the face with a baton and broke my glasses, another took my camera. I asked it back, and I was hit hard to the stomach. Then I was taken to a police station, where I was identified and detained for over an hour before being released".

Unfortunately, Tehmine Yenoqyan and Gevorg Ghazaryan were the only journalists who suffered violence and abuse on June 23rd in Yerevan: over ten were detained, including Garik Harutyunian of Radio Azatutiun, Arsen Sargsyian of Armenian News, and Ani Hovhannisian and Hrant Galtsian of HETQ. Even more were abused and beaten. Paylak Farhadian of Gala TV reported a broken rib and several visible bruises on his face.

After the 23rd, there was no more violence by the police against demonstrators and journalists. Still, tension remains high. Many are wondering for how long Armenian authorities will tolerate, without intervention, the occupation of Baghramyan. It is a central artery of Yerevan, home to various embassies, the parliament, and the residence of the President of the Republic. As of now, however, the Yerevan Electric square is more alive than ever and there are no signs of weakening on the part of the demonstrators, who say they are determined to go all the way.