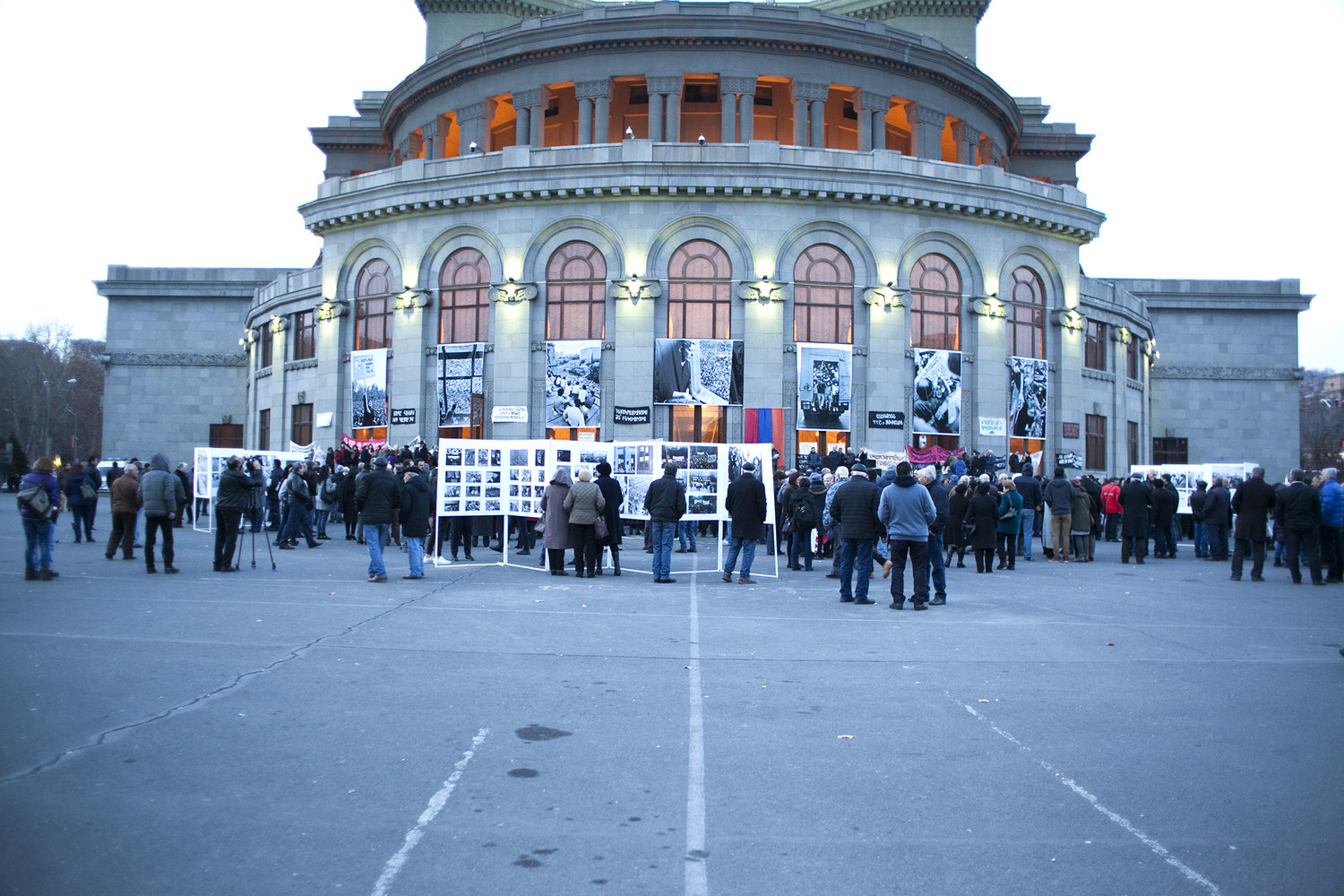 The protests of these days in Armenia against the appointment of Serzh Sargsyan as prime minister - resulted in his resignation - have as their ideal and symbolic place the Freedom Square of Yerevan. The history and the present of this square

Yerevan’s Freedom Square testifies to Armenia’s aspiration for freedom, truth, and social justice. For decades, this round esplanade in the heart of the city, the site of its opera house, has been the stage where Armenians gather to commemorate events, voice discontent and call for change.

“Let’s go down to the Opera” has become a byword for “Let’s go and demonstrate.”

Known as Theatre Square during the Soviet years, the area was renamed Freedom Square in 1991 when Armenia regained its independence.

Its link with Armenia’s national identity, though, had started decades before, when, on the evening of April 24, 1965, thousands assembled in the square to remember the 50th anniversary of Ottoman Turkey’s mass murder of ethnic Armenians and to call on the Soviet government to declare the murders genocide.

Water cannons dispersed the crowd, but, soon afterwards, the government started constructing a genocide memorial on Tsitsernakaberd, a hill overlooking the city.

In the dying years of the Soviet Union, the square again came to life, but this time over the environment. At the end of 1987 and in the beginning of 1988,  demonstrators returned to the site to protest against waste from both the nearby nuclear power plant of Metsamor and the sprawling chemical factory of Nairit.

Yet politics soon creeped into these protests. On February 13, 1988, demonstrators in Nagorno Karabakh had appealed to the Kremlin to unite the region with Armenia, then a Soviet republic.

What started as a plea to the central government morphed into a defining moment in Armenia’s history. The Nagorno-Karabakh movement, which eventually would transform the South Caucasus’ geopolitical landscape, was born.

Disputes over the official election result, which gave the presidency to Serzh Sargsyan, then turned the square into a non-stop protest site. On March 1,protesters and police clashed; at least 10 people were killed and a 20-day state of emergency was declared.

More recently, Freedom Square has been the stage for protests related to social welfare – against electricity price-hikes or for reform of the pension system. In a country where one-third of the population is estimated to live in poverty, these demonstrations, too, have resonated.

Photographer Inna Mkhitaryan tracked down those whose lives were marked by protests on Freedom Square. These individuals -- politicians, activists, ordinary citizens -- are portrayed next to images of the historical events in which they took part.

(right) In 1965, Katya Ghazaryan was a 20-year-old university student who actively participated in raising awareness about the genocide by printing and distributing leaflets. Her father, Nerses Ghazaryan, was a genocide survivor who had fled to Armenia in 1915 from eastern Turkey.

On the day of the demonstration, Ghazaryan was arrested and charged with “indecent language” -- a criminal offense at the time -- and remained in custody for three days.

‘We decided that everyone would be dressed in black,” she recalls, as she stands in the square today. “We thought we would change a lot of things, that we would take back our fatherland [territories in eastern Turkey once inhabited by ethnic Armenians]. We were naive.”

February 1988: A Painter and Protester

Fifty-nine-year-old artist Zaruhi Muradyan was 29 (right) when the Karabakh movement started in 1988 in Yerevan’s then Theatre Square. Believing that Armenia was at a turning point, she filmed the protests with a video camera her father, renowned painter Sargis Muradyan, had brought her from an exhibition trip to the US.

But, today on Freedom Square, she has no sense of that same energy.

“I was upset on the 30th anniversary [of the start of the Karabakh protests]. I believed that the square would be full of people, but no,” she laments. “Right now, it is a dead space for me. It no longer pulses with life."

Apres Zohrabyan, 48, is a veteran of Freedom Square. The yoga teacher joined the 1988 demonstrations for Nagorno Karabakh (right) when he was 18 and went on to fight in the conflict. His activism has not lessened with time -- he has participated in milestone political protests in 1996, 2008 and 2013 as well as demonstrations against copper mining in the Teghut forest. A self-described believer in the power of the people, he is a supporter of the Sasna Tsrer, or Daredevils of Sassoun, a group that, in 2016, took police hostages in Yerevan in an unsuccessful bid to secure the release of the group’s imprisoned founder, Zhirayr Sefilian,and the resignation of President Sargsyan.

Mathematician Vazgen Manukyan was 42 when, in early 1988, he joined the Karabakh Committee, whose campaign for Armenian control over Nagorno Karabakh was centered on Freedom Square. Jailed for six months for his activism, he later became independent, post-Soviet Armenia’s first prime ministerand then its defense minister.

When, as head of the National Democratic Union, he lost his 1996 bid to succeed President Levon Ter-Petrosyan, his supporters, denouncing the vote as rigged, assembled in Freedom Square.  Rallies were suppressed and the government declared a curfew and state of emergency.

But, asked about his memories of the square, Manukyan’s thoughts are not of protests. "I remember how I used to ride a bicycle there when I was young,” he says, laughing.

Artur Khachatryan, 46, governor of the region of Shirak, is a longtime member of the Armenian Revolutionary Federation (ARF-Dashnaktsutyun), commonly known as the Dashnaktsutyun.

As a university student, Khachatryan took part in protests on Freedom Square against a 1994 bill, signed by President Levon Ter-Petrosyan, which effectively outlawed the Dashnaktsutyun. It stated that political parties’ leaders could not be citizens of countries other than Armenia. Many of the ARF’s members were from the Armenian Diaspora.

Police eventually started arresting the party’s leadership on charges of attempting a coup. In Freedom Square, ARF supporters and others (pictured left) made prison bars with their fingers to denounce the arrests.

Nikol Pashinyan, 42, head of the parliamentary opposition bloc Yelk (Way Out), played a key role in the opposition demonstrations leading up to Armenia’s 2008 presidential vote. At the time, Pashinyan, a prominent journalist and Ter-Petrosyan activist, was known for his emotional orations in front of the opera house on Freedom Square.

He was sentenced to seven years in jail for allegedly fomenting disorder during the March 1, 2008 protests that erupted after Armenian President Serzh Sargsyan’s election. Pashinyan was amnestied three years later, after coming out of hiding in 2009 and surrendering himself to police.

February 2008: A Friendship Built on Protests

The friendship between Karine Gevorgyan, 60, and Gayane Hovhannisyan, 58, was born on Freedom Square. They both participated in the 1988 demonstrations for Karabakh’s separation from Azerbaijan, but met 20 years later during Yerevan rallies against presidential-election results.

They were caught on camera (left) in February 2008. They’ve been friends ever since. One evening, they went home to rest from the protests and returned in the morning to find the square blocked and the protesters dispersed.

The two women do not go to Freedom Square just for a stroll. “For us, it is a  place for struggle, not for walking [around],” says Gevorgyan. 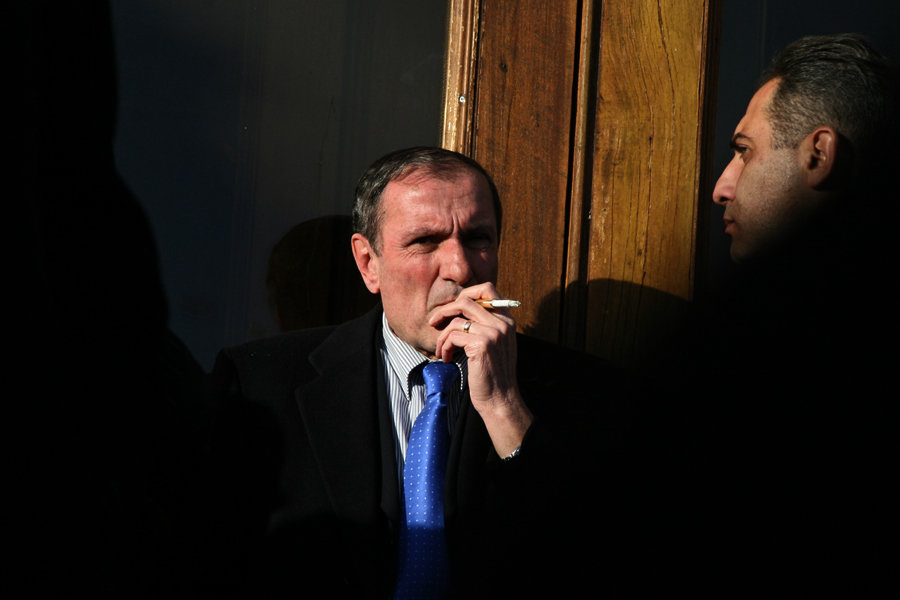 In 2013, former Foreign Minister Raffi Hovhannisyan, 58, was on a hunger strike for two weeks in Freedom Square after losing that year’s presidential election to the incumbent Serzh Sargsyan.

Hundreds congregated around the American-born politician, who called the movement supporting him the “BaRevolution.” A play on barev or “hello” in Armenian, the name refered to Hovhannisyan’s practice of greeting and chatting with ordinary people on the street – a novelty in Armenian politics.

In a speech after his hunger strike, Hovhannisyan claimed the square had become a place for “freedom, independence and national unity.”

Karo Ghukasyan (left) defies water cannons during massive 2015 protests in Yerevan against a hike in electricity rates. The image, embodying the spirit of activists defying police brutality, turned Ghukasyan, now a 24-year-old economist, into an icon of Electric Yerevan, as the demonstrations were called.

The protests started in Freedom Square, but later moved to nearby Baghramyan Avenue, the site of key government buildings, including the presidential residence.

Ghukasyan was 14 when, in 2008, he first went to election-results protests in Freedom Square as a casual onlooker.

“Freedom Square is a special space for me, I walk through it with great pleasure. I believe that revolution in Armenia will start directly from this square,” he says.