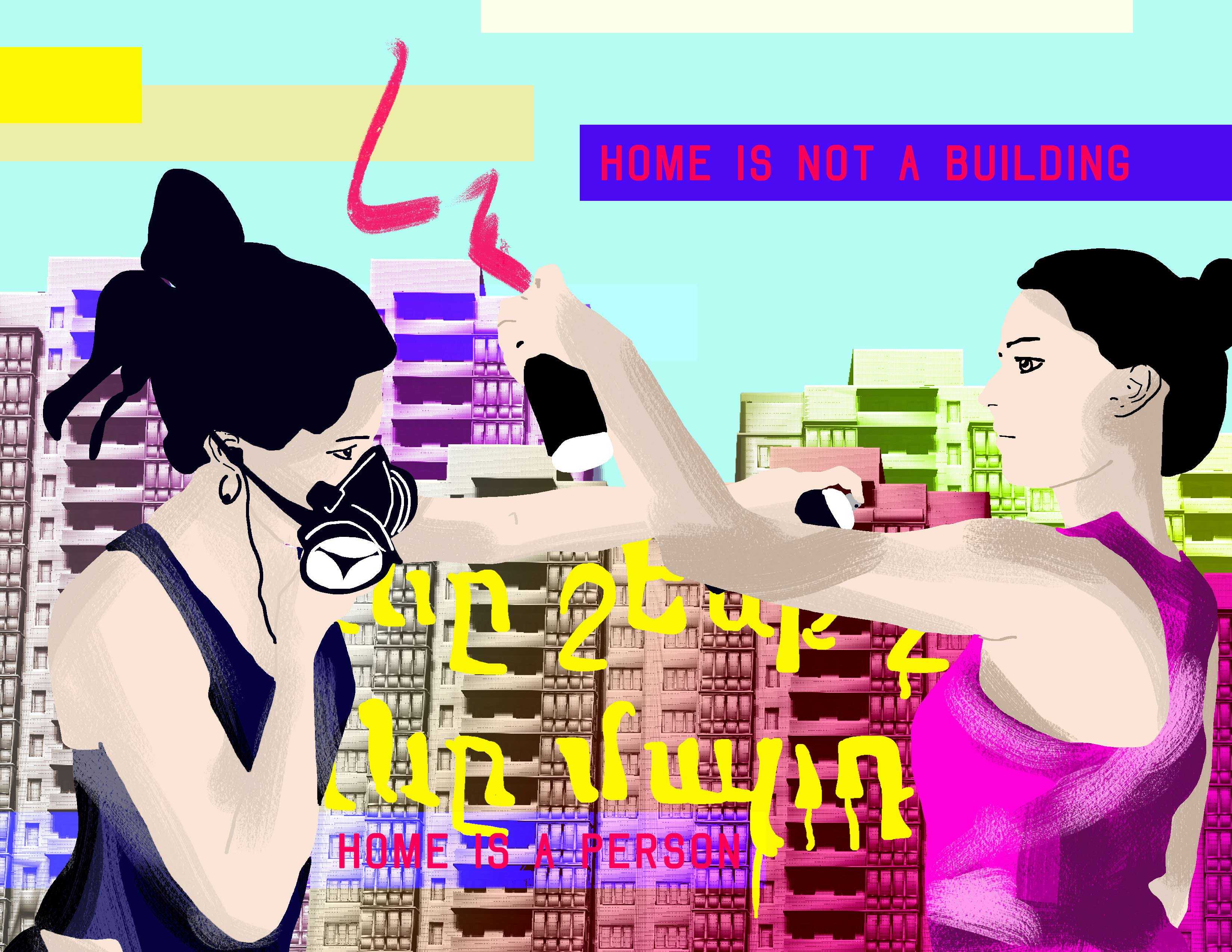 Graffiti on the walls of Yerevan are both art and political activism. A reportage

Those were the first words activist Nvard Avetisyan, 26, painted in protest.

She scrawled the message on a wall in the Armenian capital Yerevan during a demonstration against the 2013 election results.

The message was clear enough to those who understood the protest—but abstract enough that it was open to interpretation.

That sweet spot between direct political commentary and personal interpretation became a theme in Avetisyan’s work over the years.

For instance, when she participated in the 2015 Electric Yerevan protests—which demonstrated against higher electricity rates—Avetisyan started to cover walls with messages that, at first glance, had nothing to do with the rallies.

Together with her friend they wrote «#Աչքներս լույս»- a famous Armenian idiom that literally translates into “light to our eyes” meaning “congratulations.” They decided to paint the message on the walls of Margaryan Maternity Hospital. As a result, many people first thought it was a message congratulating new parents. Later they painted the same message on other buildings, mostly in the city centre so it was more accessible for a large audience.

Avetisyan also used graffiti to try and force people to think about the policies being implemented in the capital. For instance,  she created a couple of well-known street art pieces in protest against the city’s demolition campaign, including “Home is not a building, home is a person.” Her work became well-known to Yerevan citizens, but not everyone connected it to the city’s demolition campaign. “I did [it] on the buildings, which were slated for demolition,” she says, noting that she hoped her words would force people to think. 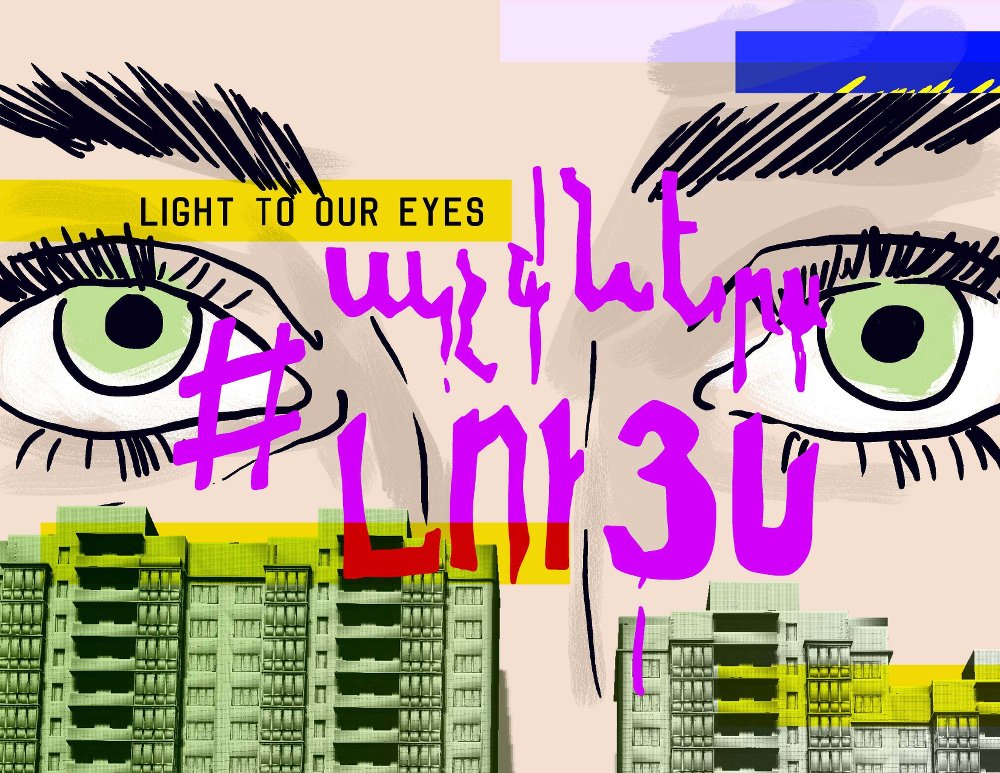 Art historian Hasmik Barkhudaryan notes that around 2015, artists in Armenia started to use graffiti to express acute criticism.

“It was the best way of protest that an artist could think of during that period,” she says.

Anna Zhamakochyan, sociologist, agrees that due to the lack of other protest platforms and spaces, street art became “one of the best ways” to express resistance.

“When there weren’t many spaces available for protest, the only public spaces left in the city were the walls, where it was possible to express protest and make it visible so it penetrated into everyday life,” she says.

Zhamakochyan recalls a wave of protest-inspired graffiti started with environmental protests, like the 2007 demonstrations against mining in Teghut.

For Avetisyan, who does not consider herself an artist, street art was a natural evolution in how she expressed protest.

She also began writing on the streets as it allowed her to make the political messages more accessible to the public. Also, she gives big importance to streets on ideological level supposedly related to the fact that all the political protests she participated in, took place in the streets.

Graffiti allowed her to write, and most importantly write in the streets, where citizenship, according to her, begins.

“The paper and pen formed the space of my creation,” she says. By swapping pen and paper for paint and walls, graffiti became another tool for her struggle. Avetisyan notes that it was ideologically important for her to write on the streets—and graffiti allowed her to spread her message to a larger audience.

In its essence, street art implies resistance, according to art historian Barkhudaryan. “Before becoming a tool for protest or having the potential of speaking up of a certain issue, it is already a protest within the field of art,” she notes.

Compared to other forms of art, “street art has an interesting phenomenon of collective discretion,” Barkhudaryan adds.

“Therefore, it has a larger impact and the chances are higher that it will penetrate different layers of society and more quickly become a matter of public discussions.” 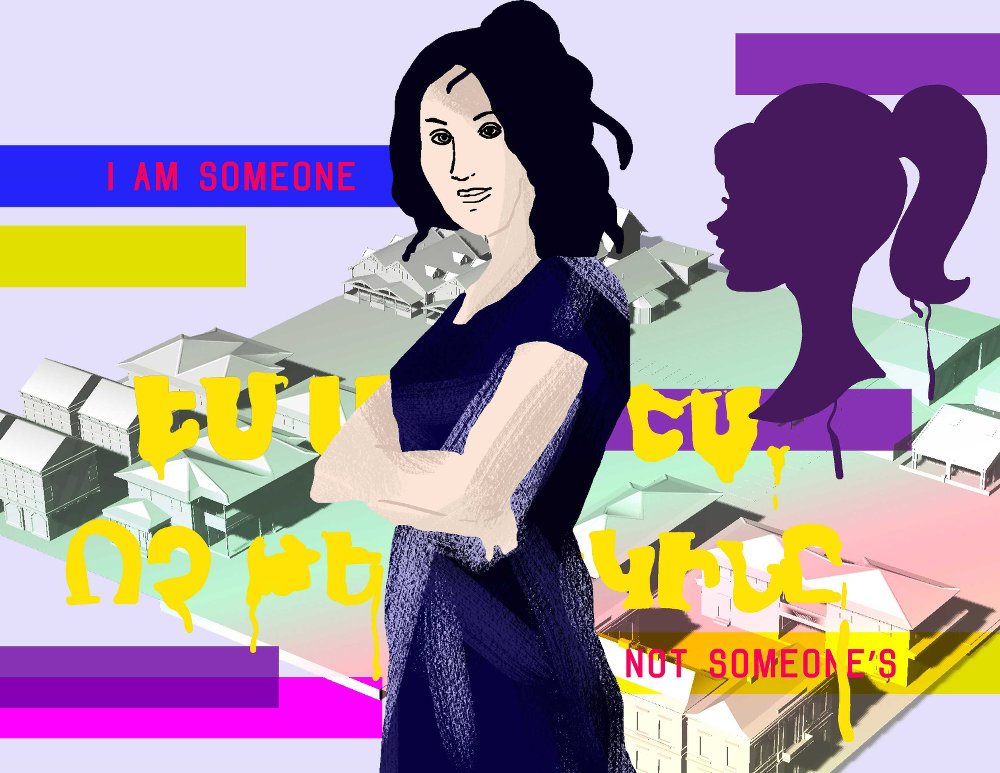 Marukyan, 21, is the co-founder of Girls Talk initiative.

She says the group sees that “the situation between men and women is not entirely equal” and they want to change “the inequality that is deeply rooted in society.”

Drawing people’s attention to gender issues has become a very personal fight for Marukyan. “We all, despite everything, deal with these issues,” she says.

“Doing something to change the existing situation is very important to me…we are raising issues which we as a society do not recognize as a problem, but it is something we feel is a problem.”

Starting from the autumn of 2018, the group began traveling to regions outside of capital Yerevan to create street art about women rights. They put up their first messages in the northern city of Gyumri: A portrait of a woman with the slogan: “I am someone, not someone’s.”

The text refers to the belief that women are first their own separate person—not, as tradition dictates, just someone’s daughter, sister, mother or wife.

They also created the slogans  “50/50” and “Yeah! It’s a girl” referring to the birth of baby girls, an event that is not always celebrated in Armenia.  In Hrazdan, a town northeast of capital Yerevan, they put up slogans such as “A woman belongs to the place where she wants to be” and “Why does my freedom scare you?!”

The group’s efforts are not always appreciated. In Gyumri, a group of men sat in a car, making rude comments while the girls worked. In Hrazdan, it was a woman who threatened to pull down their posters.

But Marukyan believes interacting with the public is part of the process. The power of the graffiti is that it is accessible, she says, noting that “we all pass through these streets.”