Is an Armenian “Maidan” possible? 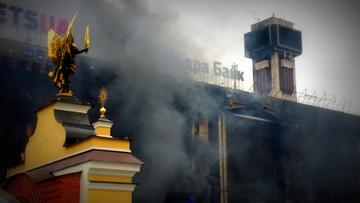 The Armenian political elite and the general public are divided on the account of the Kiev events. The main question, however, is whether the Ukrainian revolution may spill out to Armenia

In the evening of February 20, in the Armenian city of Spitak, several young activists appeared on one of the central squares, named after Viktor Yanukovich. They covered the plaque that read “Viktor Yanukovich square” with a self-made sign with the name “Sergey Nigoyan square”.

Sergey Nigoyan, an ethnic Armenian from Eastern Ukraine, was one of the first victims of the clashes in Kiev, allegedly killed by a pro-government sniper on January 22.

As for Yanukovich, he was the head of a construction company that took part in the reconstruction of earthquake-hit northern Armenia during the last years of the Soviet Unions, and the square was named after him a sign of gratitude for this work.

Of course, there are doubts as to whether Yanukovich’s role in the reconstruction would have been so highly appreciated had he not become an influential politician: the square was named after him in 2008, when he was already the leader of the Regions’ Party in Ukraine.

Arayik Harutyunyan, member of a recently formed “Civil Contract” political movement, says that he had been thinking about the symbolic renaming of the square for months, after he heard about the first cases of violence against protesters.

When on February 20 the news spread about the bloodshed in Kiev, he had no more doubts.

“I do not think Yanukovich deserves a square named after him”, Arayik explains. “Thousands of people helped Armenia after the earthquake, including many Ukrainians, but the square was named after Yanukovich... this was a purely political decision”.

The choice of Sergey Nigoyan’s name was not a coincidence: for many young Armenians he became a symbol of liberty and resistance.

Nigoyan was not the only ethnic Armenian among the victims: Georgi Hyrutiunian, from the western Ukrainian town of Rivne, was killed on February 20, when the clashes escalated. 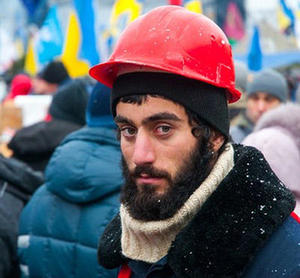 However, not everyone in Armenia shares positive views about the Ukrainian revolutionaries.

Many Armenians are wary of the Ukrainian events, seeing them as a showdown between Russian and Western secret services, rather than a popular revolution.

Russian language sources, both on television and Internet, remain the main source of information about the events in the Post-Soviet space for the majority of Armenians.

Therefore, the image of chaos in Ukraine that the Russian state media has been promoting, has influenced the perceptions of the Ukrainian events in Armenia.

Some Armenians even share Moscow’s view of Ukrainian revolutionaries as “fascists” and “criminals”.

Even after Nigoyan’s death captured the attention of Armenian media, some of the commentary aired the view that Nigoyan’s death was in vain, since he had found himself on the wrong side of the barricades.

This ambivalence about how to react to the Ukrainian events seems to go up to the highest echelons of the Armenian government. On the one hand, they do not want to displease the Russian authorities, but simply subscribing to Moscow’s view would further complicate relations with Western partners.

Higher-level government officials have been more careful in their comments, preferring to avoid the topic, especially after the defeat of Yanukovich became obvious.

When in the National Assembly the opposition suggested a minute of silence in memory of the Ukrainian protesters killed during the clashes, the parliament speaker agreed, but he added that the deputies should honor all victims, including those from the police force.

The opposition is more outspoken about the Ukrainian events, pointing to similarities between Armenia and Ukraine, and implying that Armenian government may repeat the fate of Yanukovich. However, opposition politicians are also careful to tone down their comments when it comes to the geopolitical rivalry between Russia and the West, as no political force wants to come off as anti-Russian.

Armenia and the Ukraine: so similar, yet so different

Of course, the biggest question is whether the Ukrainian revolution may spill out to Armenia.

Similarities between Ukraine and Armenia are plenty: both lack energy resources and are heavily dependent on foreign supplies, both were hit hard by the financial crisis and never fully recovered, both have a serious corruption problem.

In both countries, the government has been accused of election fraud and other authoritarian tendencies, but both countries have a degree of political and media freedom, which puts them ahead of typical post-Soviet autocracies like Belarus.

However, there are also important differences.

The Armenian opposition has been in disarray since the presidential elections of 2013, when, in spite of claims of election fraud, the opposition failed to unite, and post-election protests ended in a fiasco.

Also, given Armenia’s geopolitical situation, the European option, which mobilized at least part of protesters in Ukraine, seems relatively feeble for Armenia.

Finally, Armenia is involved into an ongoing conflict with Azerbaijan and has unresolved issues with Turkey, and against that background an internal stand-off of the kind that happened in Ukraine would be extremely risky for Armenia.

With all that in mind, it is clear why many Armenians are skeptical that the Ukrainian events will have any substantial influence on Armenia.

Poet Marine Petrosyan, who is also well known for her political activism, says “I remember 1987, when protests had started in various places all over the USSR, and many people in Armenia were saying that Armenians are different, there is no way they will rise up against the system… Only a few months later the Karabakh movement started, and hundreds of thousands were on the street protesting”.

Arshak, a small business owner from Yerevan, says he was shocked by the casualties in Kiev: “I don’t want something like that to happen in Armenia and I don’t think it’s possible”. But, he says, “Armenians need to do something in order to remind the government that it is supposed to serve the people, as Ukrainians had done… Whoever comes to power in Ukraine, all those deaths would not be in vain: from now on, people in power will realize that sooner or later they will have to answer for what they are doing”.