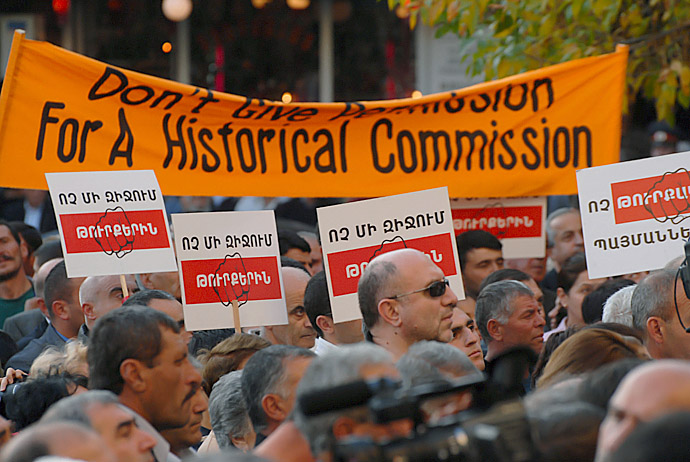 The reactions in Armenia to the signing of the protocols with Turkey. The political scenario, the public debate. A survivor of the 1915 genocide speaks out

After months of secret negotiations, the announcement of two historic protocols to first establish and then normalize relations between Armenia and Turkey were finally signed on 10 October. If ratified by the parliaments of both countries, the border - closed by Turkey in 1993 in support of Azerbaijan during the war with Armenia over the disputed territory of Nagorno Karabakh - could be opened within two months. Predictably, despite the promised benefits of economic development and stability in an otherwise troubled and highly volatile region, nationalist and other political forces in Armenia as well as its Diaspora, Azerbaijan and Turkey are up in arms against such a move.

Yet, despite initial concerns about the possibility of large scale protests against the agreement in Armenia, and not least following last year's highly controversial presidential election, there has so far been little visible opposition since the protocols were announced in August. Indeed, the main nationalist Armenian Revolutionary Federation -- Dashnaktsutyun (ARF-D) has even called off its round-the-clock strike held outside the two main government buildings on Yerevan's central Republic Square. It did so the day before the historic agreement after barely managing to rally more than 10,000 people over an issue considered central not only to local ethnic identity, but also to its own ideology.

Moreover, a second demonstration held on Friday in direct response to Wednesday's football match between Armenia and Turkey was even less successful. Key members of the party might say that opposition to the protocols will eventually snowball, but only an estimated 1,500 people turned out even though the protest was staged on a busy central Yerevan street. Speaking to Osservatorio Balcani e Caucaso and the Wall Street Journal just an hour before the demonstration, Armenia's foreign minister, Eduard Nalbandyan, seemed confident and calm despite calls for his resignation from a party that was until recently part of the ruling government coalition. It resigned in April precisely because of this new push to normalize relations.

Even so, the traditional extra-parliamentary led by Armenia's first president, Levon Ter-Petrosyan, argues that the ARF-D cannot be taken seriously until it sets its sights on removing the incumbent president, Serge Sargsyan, from power. Armen Rustamyan, Dashnakstutyun's head, admitted that there are no such plans yet. "That's an explicit demand. That is not a resignation demand yet, but it could logically develop into a resignation demand," he declared at Friday's rally. The same line is echoed by Giro Manoyan, head of the party's Hay Tahd (Armenian Cause) office, a body which considers recognition of the 1915 massacre of up to 1.5 million Armenians in the Ottoman Empire as genocide to be non-negotiable.

The last remaining survivors of that tragedy would agree. Speaking at her Yerevan apartment, 99-year-old Yelena Abrahamyan, for example, is steadfast in her opposition to a border opening until Turkey apologizes. She is also unlikely to be swayed by reassurances from the government that the establishment of a historical commission as part of the normalization process would not lead to eventual denial of what many historians and countries already consider as the first genocide of the 20th Century. Activists and nationalists in Armenia and the Diaspora are also opposed to the recognition of the existing border. They instead believe that Turkey should make territorial reparations to Armenia even if many more Turks and Kurds now inhabit the land.

Even so, it is difficult to accurately gauge the majority view held by most Armenians and many suspect that those voicing their opposition to the protocols face an uphill struggle. This is especially true for Ter-Petrosyan's extra-parliamentary Armenian National Congress (ANC), which might be considered somewhat disingenuous if it tried too hard to exploit the signing only for the sake of regime change. Nevertheless, that hasn't stopped the ANC from toughening its stance in a statement last week condemning the signing as "immoral and inadmissible." Despite this, however, neither the ARF-D nor ANC appear willing to work together to prevent the protocols from being ratified. Both, in fact, face a serious dilemma.

"Those who have traditionally had pro-government positions but are known for their nationalist views are in a difficult situation," wrote the Hraparak newspaper about such dilemmas. "If they ARF-D welcome the normalization of relations with Turkey, it will mean a betrayal of their century-old stance. If they don't welcome it, it will mean that they betray Serzh Sargsyan. No less difficult is the plight of those who have traditionally had an opposition stance but have always spoken of development and democracy, good relations and open borders with neighbors. ... So from any vantage point, the winner in this situation is Serzh Sargsyan."

Another more moderate opposition paper spells out the situation even more directly, and especially as it relates to what seems to be the extra-parliamentary opposition's hope of exploiting concerns about a possibly parallel process to resolve the Nagorno Karabakh conflict. Nalbandyan, however, is adamant that the Armenia-Turkey protocols and a peace deal with Azerbaijan remain separate processes although the international community must surely hope that normalization of relations with Ankara might at least assist resolution of a conflict on hold since the 1994 ceasefire. Ironically, despite opposition claims, anti-Turkish sentiment within Azerbaijan is reportedly on the rise because of the protocols.

"Before, Serzh Sargsyan was with the party of war, while Levon Ter-Petrosyan with the party of peace," Aravot editorialized, noting how the conflict is often used for internal political purposes whatever the situation. "Now they seem to have swapped roles. But in reality, the real supporter of peace is he who takes into account the Karabakh people's opinion and the biggest pacifist is he who removes the Karabakh issue from the agenda of the political struggle in Armenia. There are so many things that can be said of the authorities that they did not have to invent Karabakh's sellout by Serzh Sargsyan."

Moreover, such accusations merely end up confusing people. One taxi driver approached by Osservatorio, for example, said he was in favor of open borders with Turkey, but then paused before continuing. "They say the government is going to ignore the Genocide and sign a peace deal with Azerbaijan, but I don't know what to believe anymore. It's all politics at the end of the day and neither side will let me decide anything." More confusingly, while one senior activist in Ter-Petrosyan's HIMA! youth movement has been using Facebook to turn others against the agreement, he instead declined an interview with the BBC on the grounds that he actually supported the protocols.

For now, therefore, with society divided and also disorientated, neither Ter-Petrosyan's extra-parliamentary opposition nor the ARF-D appears strong enough to prevent the Armenia-Turkey protocols from being ratified by the Armenian National Assembly. Instead all eyes are on Turkey, which should present the protocols to parliament on 21 October. In Armenia, the protocols will first have to be sent to the Constitutional Court, then to the President's Office, and only then on to the National Assembly. One local diplomat speaking on the condition of anonymity said a speedy ratification by the Turkish parliament would theoretically see the same happen in Armenia.

But, however the much-touted football diplomacy plays out in the political realm, other such as British-Armenian businessman Charles Masraff remain hopeful. Although planned eight months earlier and without any knowledge of the existence of the protocols, the marriage of his ethnic Armenian son to a Turkish fiancée coincidentally occurred on the same day that the agreements were signed in Switzerland. Last week, on his return from the wedding in Turkey, Masraff held a special party at his Yerevan cafe just two days after the Armenia-Turkey football match to celebrate both events and to symbolically usher in what many hope could be a new chapter in relations between the two countries.

Time will tell if such optimism is warranted or not.