One Year After the 2020 Karabakh War 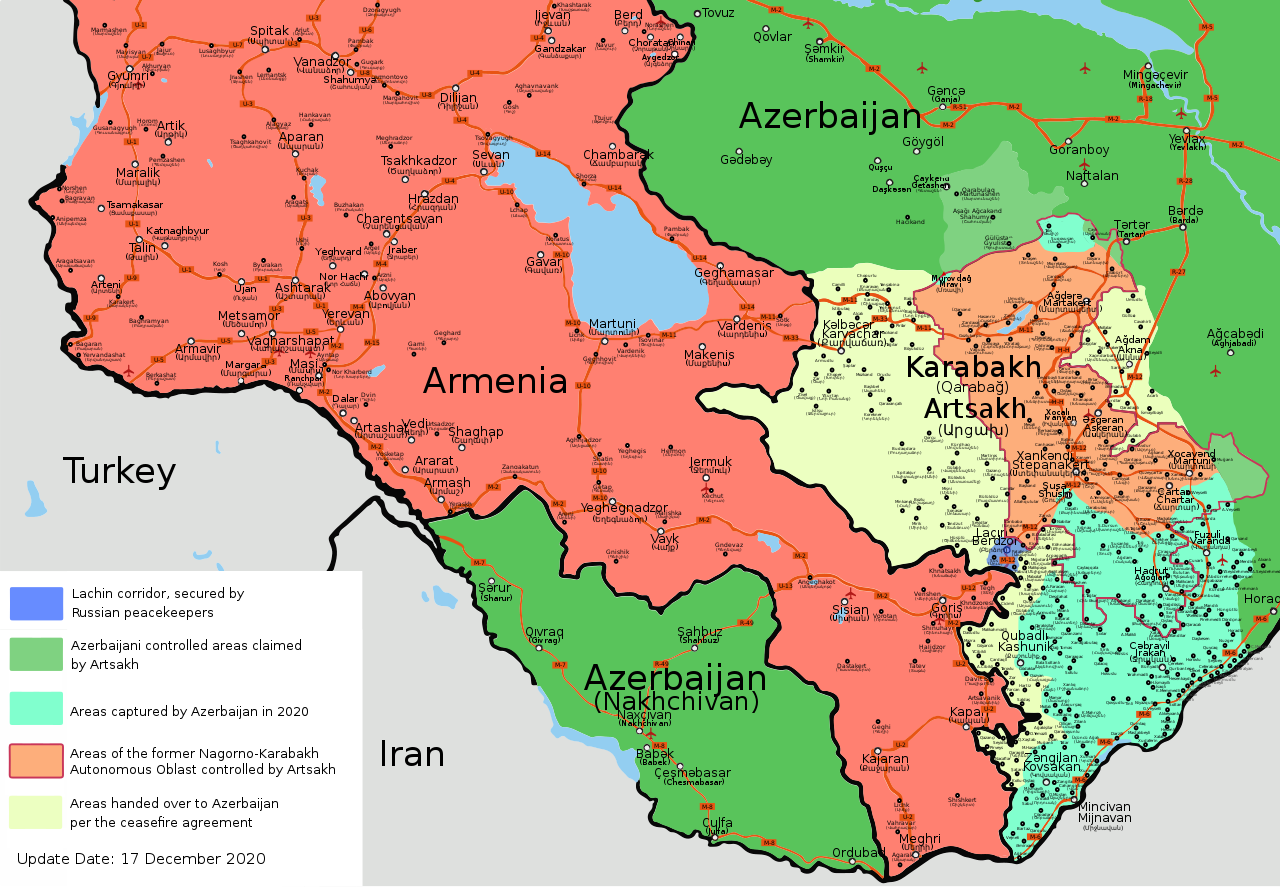 Though the future remains unpredictable, last year’s war between Armenia and Azerbaijan over the disputed territory of Nagorno Karabakh changed the geographical and geopolitical landscape in the South Caucasus after three decades of bitterness, conflict, and division. Now, some analysts hope, there is an opportunity to turn a new page in Armenia-Azerbaijan relations

The 9-10 November 2020 ceasefire that ended last year’s fighting should have clarified this future, but a lack of transparency and a drought of objective or informed analysis has left the public in both countries confused and in the dark. Certainly, some provisions of the agreement remain unfulfilled, though that might change in the coming weeks and months.

Armenia wants Azerbaijan to return the remaining captives that it holds while Baku is frustrated that an anticipated transport link running through Armenia to its exclave of Nakhichevan, as dictated by the ceasefire agreement, has not yet been established. It also demands that Yerevan hand over any maps of minefields in territory now back under Baku’s control.

Meanwhile, despite more frequent talk of normalising relations between Armenia and Azerbaijan, and possibly Armenia and Turkey too, there have been no clear signs as to when such developments might happen.

“For 12 months, the Armenian government and much of the population has been limited to a state of denial where it took many, many months in order to accept a new reality,” says Richard Giragosian, the director of the Regional Studies Center (RSC) in Yerevan. Now, he says, those signs might be on the horizon.

“The turning point," he says, “came on the sidelines of the UN General Assembly in New York [in September] when the Armenian and Azerbaijani Foreign Ministers with the OSCE Minsk Group mediators were able to reconvene in a meeting that heralds the return and resumption of diplomacy over the force of arms.”

“This marks a return to diplomacy and a belated Armenian adjustment to a painful, unprecedented new reality.”

Indeed, two weeks before the first anniversary of the 2020 war, veteran Armenian journalist and Karabakh watcher Tatul Hakobyan announced that unnamed official sources alerted him to the possibility that Armenian Prime Minister, Nikol Pashinyan, and the Azerbaijani President, Ilham Aliyev, would meet in Moscow with Russian President Vladimir Putin.

According to Hakobyan, two new documents would be signed – one on border demarcation and the other on unblocking of economic and transportation routes in the region.

However, at time of writing, there has still been no official confirmation of such a meeting, although there has also not been any categoric denial either. Instead, Russian Foreign Ministry spokesperson Maria Zakharova simply stated that if such a meeting was to occur then there would be an official announcement from the press services of both governments.

Even so, on 7 November, just days before the first anniversary of the ceasefire agreement, Kremlin Spokesperson Dmitry Peskov confirmed that a video conference between the three leaders was being arranged on a date still to be determined.
Giragosian and the Baku-based director of the Caucasus Policy Analysis Center (CPAC), Ahmad Alili, believe that such a meeting is possible. “We are waiting for other documents to be signed in the upcoming weeks or months,” says Alili. “There’s a lot of positive developments in this regard so let’s hope that it will take place.”

But such developments could prove controversial. Border delimitation and demarcation might prove to be especially sensitive given tensions on the new Armenia-Azerbaijan Line of Contact (LoC). Moreover, there are fears among many in Armenia that recognition of Azerbaijan’s borders might effectively also mean acceptance of its territorial integrity.

Nevertheless, there is reportedly progress on this issue and Russian President Vladimir Putin has already offered assistance with the process and access to Soviet-era maps.

Giragosian, however, believes that this late intervention into the matter was by design. Up until now, he says, Armenia and Azerbaijan had been using different maps from different eras and also different scales.

"I think it was on purpose to exploit the insecurity, hence the Russian military buildup in southern Armenia and Russia’s very quiet acquisition of Armenia’s third external border,” Giragosian says, referring to the deployment of Russian forces on the border with Azerbaijan as well as its existing presence on the Iranian and Turkish ones, leaving Yerevan responsible only for its border with Georgia.

“I would agree with Richard that Russia wants to use this to gain more leverage over Armenia and Azerbaijan,” says Alili. “Any rational foreign policy actor would do the same.”

Meanwhile, Iran has reacted to the changes underway in the region, with tensions between Tehran and Baku simmering because of plans to link Azerbaijan through Armenia to its exclave of Nakhichevan. This, believes Alili, was Iran warning that regional stability and security is unlikely without its consideration and participation.

And it is this route, believed to run close to the Iranian border, that raises other questions, not so much in terms of its happening, but rather in how it functions. Perhaps counterproductively, Azerbaijan has fed uncertainty in Armenia by referring to the route across Armenia as the "Zangezur Corridor,” sparking fears that this means ceding territory to Baku, although recent official remarks make it clear that each country will retain sovereignty.

“The link from Azerbaijan to Nakhichevan,” says Giragosian, “may actually be a roadway and railway from point to point with no exit in Armenia proper and the other sticking point was the specific financial amount of Armenia’s transit fees for the tons of cargo or passengers in terms of using both connections.”

However, notes Alili, the last point of the 9-point ceasefire agreement is quite clear.

“The tripartite statement says there should be ‘unobstructed movement’ of cargo and passengers,” he says. “So this means that in no way Armenia can stop any car passing through. This is what Azerbaijan means when it says ‘corridor.’ The big question is will it apply to foreign vehicles too?”

Nevertheless, Alili continues, recent statements from the Azerbaijani president indicates that there is progress on this matter. And last week Pashinyan acknowledged that Armenia is fully in favour of enabling the route in return for one through Azerbaijan to Russia. The issue of customs duties was also mentioned.

But the regional implications and benefits are far wider than simply Armenia and Azerbaijan. Ankara could benefit too.

“I really think Turkey was in a losing position by the end of the war,” explains Giragosian. “In other words, at the beginning, Turkey provided unprecedented direct military support for Azerbaijan but at the end it was Russia that came in with the unilateral deployment of peacekeepers and swept the geopolitical prize.”

For Turkey, he says, the normalisation of relations with Armenia is a way to “regain a seat at the table in terms of the all-important regional trade and transport dynamic.”

The Armenia-Turkey border was closed in 1993 after Armenian forces took the Azerbaijani region of Kelbajar. Now that it is back under Baku’s control, along with the other regions surrounding the former Nagorno Karabakh Autonomous Oblast (NKAO), there is no longer a justifiable reason to keep it closed. Even Baku now says it has no objection to Armenia and Turkey mending relations, although this might be contingent on Armenia-Azerbaijan normalisation.

Following the August 2008 Russia-Georgia war, Ankara had already tried to do this with the much publicised ‘football diplomacy’ and the signing of two Armenia-Turkey protocols that were never ratified and eventually revoked because of resistance from Azerbaijan. But Alili believes the situation is different this time round.

“In 2009, some decision makers in Turkey wanted to separate these processes but that didn’t succeed,” he explains. “These are parallel processes and now I’d say that Turkish-Azerbaijani foreign policy is much more aligned than it was before. But can Armenia normalise relations with Turkey without Russia?”

Giragosian goes further and says that Armenia-Turkey relations might instead actually be decided by Ankara and Moscow. “Armenia will have to struggle to make sure that the implementation of normalisation is on its terms rather than externally between Russia and Turkey,” he says.

The future of a proposed 3+3 regional format supported by Azerbaijan, Russia, and Turkey and involving Armenia, Georgia, and Iran, also remains uncertain, not least because of Tbilisi’s traditional resistance to cooperation with Moscow. Yet, even if there are still more questions than answers a year after the 2020 war, Giragosian remains cautiously optimistic.

“Going forward,” he says, “I think we are in a new and unprecedented period that is a deep-seated challenge but also one that is pregnant with opportunity.”