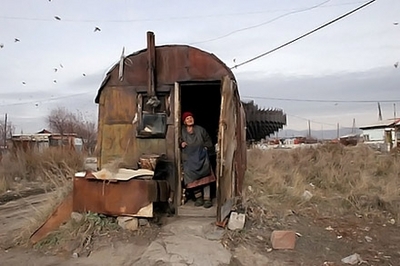 Gyumri, the city symbol of the quake that 21 years ago struck Armenia. The stories of the homeless, the domiks, the migrants, waiting for the opening of the borders with Turkey. Reportage

December 7, 1988, 11.41 am – An earthquake measuring 6.9 on the Richter scale hits northern Armenia, killing 25,000 and leaving many more homeless. Mikhail Gorbachev, then General Secretary of the Communist Party of the U.S.S.R. cuts short an official visit to the United States to travel to the small South Caucasus Soviet republic as news of the catastrophe makes headlines the world over. Poverty skyrockets as a nation mourned its dead.

Hundreds of millions of dollars flooded into the country for relief and reconstruction efforts, but two other events of as much significance soon frustrated efforts to rebuild the disaster zone. In 1991, Armenia declared independence from the former Soviet Union, and in 1993, in support of Azerbaijan during a de facto war with Armenia over the disputed territory of Nagorno Karabakh, Turkey closed the land border with its eastern neighbor.

Meanwhile, as corruption skyrocketed, the conflict as well as two closed borders and an economic blockade by Azerbaijan and Turkey only added to Armenia's woes. Yet, despite strong economic growth in the mid-2000s, albeit from a low base, and promises from then President Robert Kocharyan to completely rebuild Gyumri, Armenia's second largest city and the main urban center to be hit by the earthquake, the outlook appears as bleak as ever.

Once Gyumri had been known for its architecture, humor and cultural importance, but now it has become synonymous with the earthquake and domiks – “temporary” accommodation usually amounting to little more than metal containers or dilapidated shacks. Hot in the summer and bitterly cold in the winter, others more fortunate found refuge in abandoned buildings vacated during the economic collapse following independence.

Vartik Ghukasyan, for example, is 71 and alone. An orphan, she never married and now struggles to survive on a pension of just 25,000 AMD (about $65) a month in a rundown former factory hostel in Gyumri. However, that might all change as more buildings are privatized or their existing owners seek to reclaim them.

According to the 2001 census, the population of Gyumri stands at 150,000 although some claim that it has since grown to 160-170,000. Nevertheless, few local residents take such figures seriously. Pointing to low school attendance figures, they estimate the actual population might be no more than 70,000. Even so, despite the exodus, there are as many as 4-7,000 families still living in temporary shelter according to various estimates.

Anush Babajanyan, a 26-year-old photojournalist from the Armenian capital, is one of just a few media professionals who remain concerned by their plight. Having spent the past year documenting the lives of those still waiting for proper housing, the anniversary might have been otherwise low-profile outside of Gyumri, but Babajanyan attempted to focus attention on the occasion by exhibiting her work in Yerevan.

“When I started this project, 20 years had passed since the earthquake and there were families still living in domiks who were not receiving enough attention,” she told Osservatorio. “ The government and other organizations promised to solve the issue of their housing, but their actions were not enough. Since then I have seen very little improvement.”

“If this issue wasn't solved in 20 years, it probably isn't surprising that not much has changed in just a year. However, it has been two years since Serge Sargsyan, then Armenian prime minister and now president, said that the issue of these residents will be solved by now. But, although some districts are being reconstructed, this is not enough to resolve the issue.”

As the center of Shirak, an impoverished region that most in Armenia and its large Diaspora appear to have largely forgotten, Gyumri suffers from unemployment higher than the national average. Travel agents continue to advertise flights from the local airport to parts of Russia. As elsewhere in the region, the only hope for a better life lies outside. But, with a global economic crisis hitting the CIS hard, there are now also fewer opportunities even there.

This year GDP per capita has already plummeted by over 14 percent nationwide, far in excess of the decline registered in Azerbaijan and Georgia, while poverty and extreme poverty - already calculated with a low yardstick - has reportedly increased from 25.6 and 3.6 percent respectively in 2008 to 28.4 and 6.9 percent today. Local civil society activists claim that the figures might be twice as high in Gyumri.

But, some believe, the city could benefit greatly from an open border with Turkey , transforming itself into a major economic and transit hub for direct trade between the two countries. Just 8 km away lies the village of Akhurik, one of two closed border crossings. Repair work had been conducted on the railway connecting Gyumri to the Turkish city of Kars prior to last year's World Cup qualifying match with Turkey held in Yerevan.

With Turkish President Abdullah Gül making a historic visit to Armenia for the match, villagers were once again given hope that a border opening would be imminent. "It will be very good if it opens," one resident told RFE/RL at the time. "We used to work in the past -- 40 families benefited from work related to the railway. Now they sit idle without work or have to choose migrant work in Russia. It will be good when the line is opened."

But, with pressure from Azerbaijan on Turkey not to sign two protocols aimed at establishing diplomatic relations and opening the border until the Karabakh conflict is resolved, such a breakthrough appears as elusive as ever while unemployment and poverty increases. Nowhere is that more evident than the city of Ashotsk, just 30 minutes outside of Gyumri. Karine Mkrtchyan, public relations officer for the Caritas Armenia NGO says conditions are typical.

“Everywhere you will see abandoned places, especially public spaces,” she says. “They are ruined. There are no facilities, there is a lack of drinking water, and irrigation. People are on their own to solve their problems. We had a loss of life during the earthquake and then massive migration which stopped in the late 1990s before starting again in early 2000. Now there are even more people who decide to migrate.”

Last week, on the 21st anniversary of the earthquake, the government attempted to counter criticism of what many consider to be inaction and a lack of concern with the socioeconomic situation in Gyumri. Opening a sugar refinery owned by one of the country's most notorious oligarchs at the same time, the Armenian president visited Gyumri and promised that 5,300 new homes would allocated to those still without by 2013.

The $70 million construction project has been made possible through a $500 million anti-crisis loan from the Russian Federation.

However, whether such promises come to fruition remains to be seen and government critics remain unimpressed. Indeed, they point out, even if the apartments are built and allocated on time, it would have taken a quarter of a century to do so. Moreover, for Gyumri natives such as Mkrtchyan, the need for economic investment and development in the regions of Armenia remains as urgent as ever.