Escalation of students’ protests in Albania 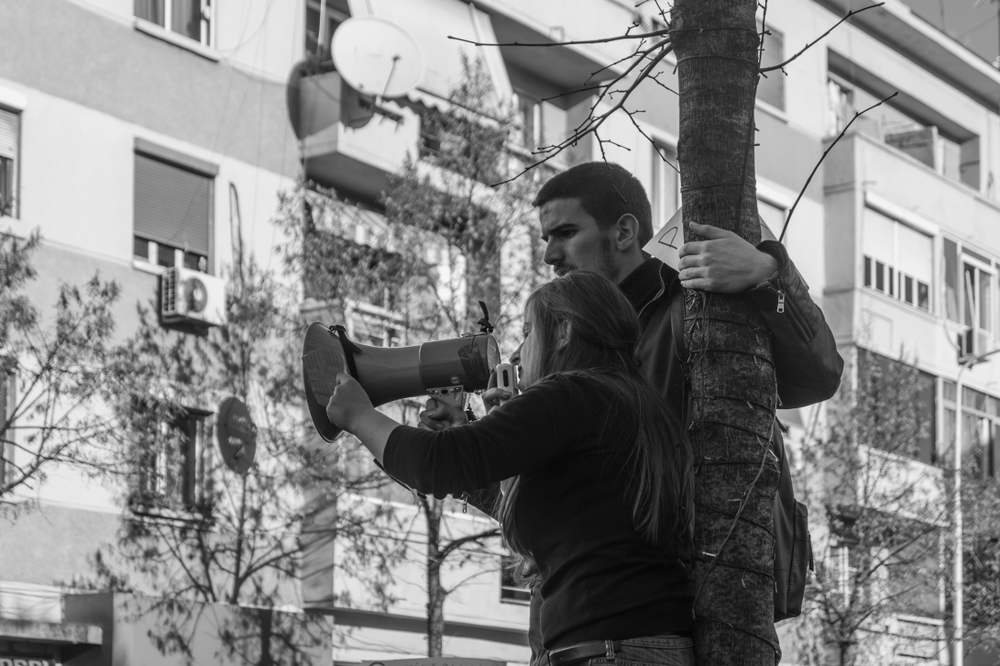 In front of the refusal by the Albanian government to abolish the law on higher education, after two weeks of peaceful demonstrations, students have opted for an escalation of their protests

The students of Albania's public universities have been on the streets of Tirana since two weeks, protesting against the controversial law on higher education, poor quality of teaching, and corruption. Small groups of protesters, in spite of weather conditions, spend their nights in front of the Prime Minister’s Office. Unlike past experiences, these protests are characterised by sporadic, horizontal, and non-political gatherings. The students' peaceful demonstrations have marked a new standard in the ‘land of the eagles’, where the wind of democracy has been slowly blowing since the end of the communist regime.

Unusually for Albania to date, besides the lack of incidents or confrontations, the students proceed, at the end of each protesting day, to clean the streets where they have marched. This symbolic act aims at showing that the students’ overall goal is the protection of the common good.

The students have submitted eight requests to the government, where the abrogation of the law is the first step towards sustainably addressing the current situation in public universities. At first, Prime Minister Rama offered some concessions regarding the abolition of tuition fees for excellent students and those from families in need and employment opportunities for 1,000 students in the public administration, etc., which were immediately rejected. According to protesters, it does not make sense to provide alternative concessions instead of addressing the root cause. Their recurrent chorus states “We have nothing to negotiate, as our requests are basic”.

So far, the students’ commitment and resistance to any dialogue or compromise on the submitted requests has gone beyond any expectation, and the government itself seems unable and/or unwilling to properly deal with the situation. In last Thursday’s parliamentary session, the Prime Minister publicly admitted that ‘first the protest gave a slap to the government. Secondly, the protest gave a punch to the opposition, and thirdly it gave hope to society”. He expressed his readiness to meet the eight requests, provided that a channel of dialogue is previously established.

Despite the fact that students explicitly ruled out any dialogue, the Prime Minister shows no inclination to abrogate the law on higher education. This would constitute a risky move for his leadership as well as a precedent for future concessions. The socialist government renewed its mandate in June 2017 and is expected to govern Albania until summer 2021.

At the moment, the responsibilities for the deterioration of higher education remain ‘orphan’. Nobody has resigned so far and mutual blaming is performed between the management of public universities and the government. An urgent meeting was called by Prime Minister Rama with the rectors and deans (livestreamed at ERTV – Edi Rama TV), which resulted in a long monologue on the students’ frustration, bad management of public universities, and prospective revision of the latter’s autonomy degree.

The unpopular reform has been a known "hot potato" since its conception. Back in 2015, the very Minister of Education, Youth and Sports declared in a parliamentary session that only the University of Tirana had sent more than 200 pages of comments on the first draft law, and only 6 pages to the second one. It is hard to imagine that such a wide consensus was reached in such a short time. Moreover, the reform was passed over three years ago, and yet not all the sublegal acts have been adopted. This legal vacuum has created space for abuse and misconducts on the side of universities too.

In this highly polarised public space, the media outlets close to the government have been spreading fake news in an attempt to manipulate the public opinion. The main messages revolve around the opposition’s orchestration of the protests, decreasing number of students protesting on the streets, etc. In fact, it would be impossible for the current fragmented opposition to organise and maintain such a massive protest. They have already tried and failed.

In front of the government's stubborn attitude and widespread lack of trust, the students have opted for an escalation of their protests, where blocking the circulation in the main roads of Tirana is only a first move that can be followed also by hunger-strike, as long as the law is not abrogated.