Albania, civil society on the move 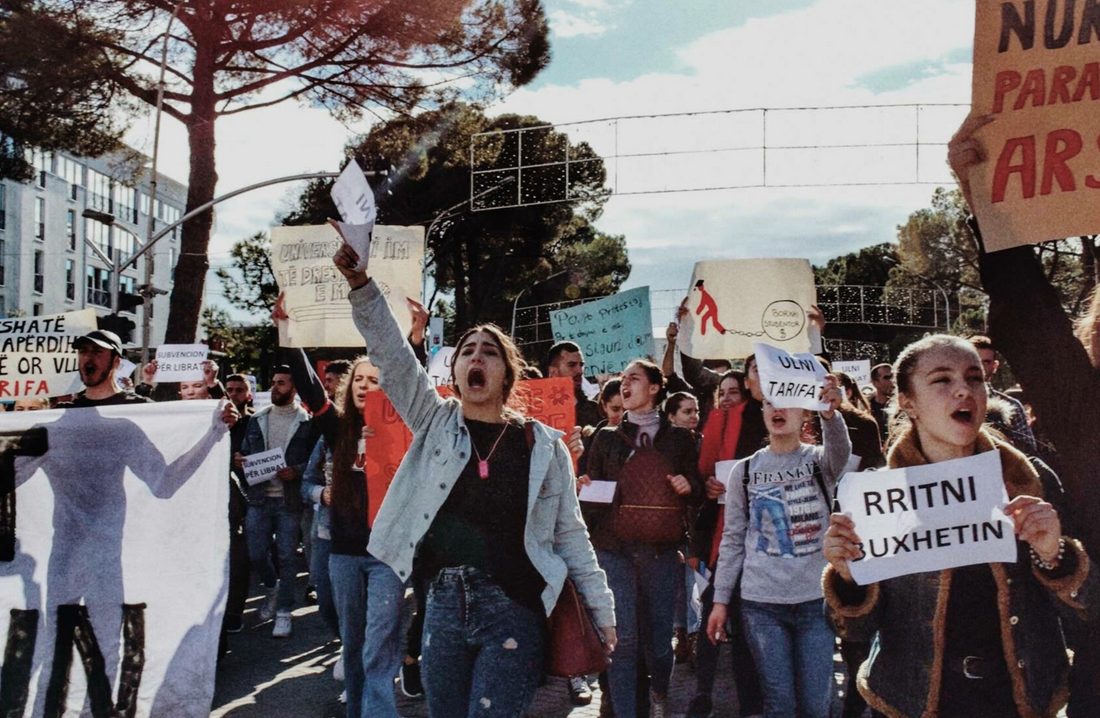 In the last thirty years in Albania, only the main parties have managed to bring people to the streets to protest, with some notable exceptions. An interview with researcher Klodiana Beshku

Is Albanian civil society on the move? Have citizens movements and associations strengthened in recent years?

Yes, since November 2013, when civil society was very active in the mass protests against the prospect of Syria’s chemical weapons being dismantled in Albania. Since then, several other occasions have made us think that Albania finally has “a society on the move”.

For the first time in the country's modern history, Albanians were protesting against the US’ proposal to dismantle the Syrian weapons of the al-Assad regime in Albania, despite the historical debt of gratitude to Washington for supporting Albania and Kosovo independence.

“Yes, we can say No” was one of the main slogans of the protest, and it was very telling in terms of finally taking awareness of our own citizenship rights.

Another massive protest in Albania was the students' protest of December 2018. Before these two events, Albanian civil society had managed to organise some smaller ones concerning different aspects of everyday life and citizens' concerns.

Klodiana Beshku researches and teaches European Integration and Social Movements at the Department of Political Sciences, University of Tirana

However, before that only the major parties had been able gather massive protests in the capital, also carrying people from other cities on buses or mini-vans.

I have been teaching “Social and Political Movements” since 2009, and before 2013 I could hardly find an example of a massive protest called by civil society except for the students’ protests of 1990-1991.

What are the characteristics of the relationship between civil society and politics in Albania?

The problem is that the third group is very small, and it was nearly nonexistent until maybe ten years ago. An actual feminist, LGBTQ, or leftist movement that does not seek funds from organisations linked to the government or to alike governments in the world is only a recent phenomenon. In the past, it was normal for Albania's civil society organisations to flirt with any political or other group that could be financially convenient.

Do Albanian civil society organisations feel part of movements in the entire region? Or are they rather looking at relations with Western Europe?

The first and the second group of civil society organisations I mentioned usually look for any opportunity to get funds to survive, so yes, they try to establish relationships with their siblings in Europe. The third group is much more selective and establishes more genuine ties with similar organisations in Europe, like the Ebert Stiftung Foundation, the Rosa Luxemburg Foundation, or the Global Fund for Women. I could also identify a “Euro-phile” group of civil society organisations in terms of supporting the EU in the Western Balkans. They are more linked regionally and try to support each other in questions related to the European Integration of the region such as human rights, consolidation of rule of law, corruption, media freedom etc.

Recently two major events have shaken Albanian society: the leaking of ID numbers and wages on 22 December and the leaking of cars' plates numbers a week later… How did people react?

People were very angry at these events and for some days they expressed all their rage and embarrassment through social media and social platforms. Yet, no civil society organisation took any concrete initiative to tackle these questions and guide a more structured reaction.

This happened partly because there is no real attachment to privacy rights in Albania, partly because the government reacted very fast in finding the perpetrators. The episode was framed as an individual crime, although two out of four were part of a public institution. This case shows that we need to raise awareness on the right to protect privacy and protection of sensible data.

Has the Internet strengthened Albanian civil society's capacity to act and influence?

In some aspects, the web actually often weakens it, although it provides good leverage to raise awareness on citizens’ rights and questions that affect them. It is as if the web neutralised people’s reactions or will to react by giving them space to express their approaches or attitudes towards a phenomenon.

We have to consider that most people in Albania are not trained to spot fake news on the Internet and their favorite pastime is surfing the web. Therefore, they are the perfect target for manipulation via social media. On the other hand, even many representatives of Albanian civil society often feel like posting online fulfills their mission.

Fortunately, this is changing. More and more often we see concrete online messages or calls to react from civil society activists and sometimes citizens actively respond.

What are the issues on which Albanian citizens are ready to have their say?

This is a key question I believe no one would be able to answer properly. Unlike many others, I was not very enthusiastic about the massive reaction towards the proposal to dismantle the Syrian weapons in Albania in 2013. I could not see any good in citizens mobilising only when their actual life was threatened. On the other hand, I was very enthusiastic about the students’ reaction in 2018. I saw a whole generation rebelling against the conditions of their academic and school life. That was amazing!

Unfortunately, Albanian society is still highly polarised and politicised. You cannot believe how readily people react to their party leader’s call to arms. Only a small portion of Albanian society reacts to a huge case of public corruption, a woman’s rape, or child abuse.

Civil society needs to put a lot of effort into raising awareness on these topics and teachers need to educate the young generations as well.

The media should have a role in developing and strengthening civil society. Is that the case in Albania?

They should, but they don't. They do not cover protests related to human rights abuses or corruption or cases involving a certain interest group. The media are not a “fourth power” in Albania. They never were, with the exception of the early 1990s after the collapse of the communist dictatorship in Albania.

A lot of Albanian journalists became extremely rich in those first democratic years. Except a few that can justify their wealth, the rest owns enormous villas by the seaside and leads a luxurious life that only a few people can afford. A society that has extremely rich judges, journalists, police officers, professors, or politicians has done something wrong.

A “vetting process” has been going on for the judiciary since 2014. I strongly believe that such a process should be applied to the above categories too.